When Tim Cook took the helm at Apple in 2011, many saw the Alabama native and former company chief operating officer as a somewhat boring Steve Jobs stand-in. Wall Street worried whether Apple could continue its remarkable growth under a new boss, while Apple fans wondered if they could expect the same astronomical advancements in consumer technology they’d grown to love.

In the intervening three years, Cook has impressed doubters with new products like the Apple Watch and the iPad Air, and wowed shareholders as Apple’s stock price continues to rise (a six-month hiccup in 2012-2013 aside).

We’ve learned things about Cook’s personality and life, too. He’s not the terrifying, volatile firecracker that Jobs was. But the instinctively private Cook has gradually revealed a more personal side as he’s accrued successes. Cook’s most personal revelation came Wednesday, with his formal acknowledgment that he is gay, an oft-rumored fact that the Apple chief had never publicly confirmed.

In the spirit of getting familiar with the CEO of one of the world’s most iconic companies, here are 6 things to know about Tim Cook:

He’s a working-class kid from the Deep South

Cook grew up in southern Alabama near the Gulf Coast, and worked at a paper mill in the state and an aluminum plant in Virginia. His father was a shipyard worker. Cook earned his degree in industrial engineering from Auburn University in his native Alabama.

By all accounts, Cook is a dogged worker. He told TIME in 2012 that he wakes up every morning before 4 a.m., spends an hour on email, then goes to the gym, then Starbucks, then heads to work.

Cook got his start managing Apple’s complex supply chains, closing warehouses and instead employing contract manufacturers. He pushed hard for stable supplies of product parts. “You kind of want to manage it like you’re in the dairy business,” he has said. “If it gets past its freshness date, you have a problem.” Cook is also able to coordinate fluidly with Apple’s different departments. After Jobs’ death, he broke down structural walls between design and software engineering segments, Bloomberg Businessweek reported last month.

Though Cook doesn’t often chatter about his hobbies (“I’ve tried to maintain a basic level of privacy,” he says), Cook enjoys hiking and cycling. He included a shot of Yosemite National Park on his Twitter page, and he’s reportedly an avid cycler as well as a self-admitted “fitness nut” — a reason, perhaps, that Apple’s upcoming Apple Watch is being marketed towards the fitness-obsessed.

His sexuality hasn’t gotten in the way at Apple

Being gay has never been a problem for Cook at Apple, he said in his column for Businessweek. “Plenty of colleagues at Apple know I’m gay, and it doesn’t seem to make a difference in the way they treat me,” said Cook. “Of course, I’ve had the good fortune to work at a company that loves creativity and innovation and knows it can only flourish when you embrace people’s differences.”

Unlike his predecessor, Cook’s managerial style is markedly collaborative. When a group of investors visited Apple’s campus in 2012, Cook did what would have been unlikely for Jobs: he showed up, listened to his CFO’s presentation, and answered questions. Cook has showed that for the first time in years, not only Apple employees have the CEO’s ear, but investors do, too. 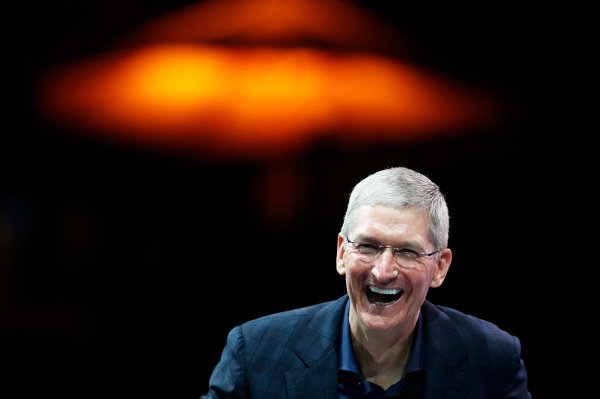 Apple CEO 'Proud to Be Gay'
Next Up: Editor's Pick