By Simon Shuster and Salima Koroma

On a warm morning in early August, a 68-year-old Chechen man named Said-Emin Ibragimov packed up his fishing gear and walked to his favorite spot on the west bank of the river that runs through Strasbourg, the city of his exile in eastern France. Ibragimov, who was a minister in the breakaway Chechen government in the 1990s, needed to calm his nerves, and his favorite way to relax was to watch the Ill River, a tributary of the Rhine, flow by as he waited for a fish to bite.

Ibragimov had reason to be nervous. The previous month he had accused Russian President Vladimir Putin of war crimes in a criminal complaint he had sent to the International Criminal Court (ICC) and to the Kremlin. Ibragimov had taken five years to compile evidence of what he considered crimes committed during Russia’s two wars against separatists in the Russian republic of Chechnya. During the second Chechen war, which Putin oversaw in 1999-2000, Russia bombarded the Chechen capital of Grozny and killed thousands of civilians. The U.N. later called Grozny “the most destroyed city on earth.” 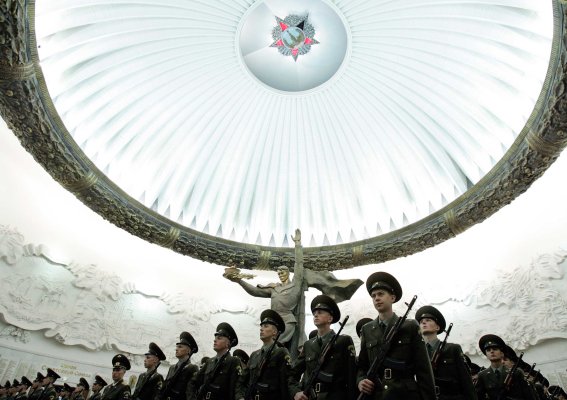 Russians Rewrite History to Slur Ukraine Over War
Next Up: Editor's Pick