President Putin at the Great Kremlin Palace in Moscow on May 7, 2012, during his inauguration ceremony.
Alexey Druzhinin—AFP/Getty Images
By Oliver Bullough

At times during the past year Russian President Vladimir Putin has appeared to make somewhat sudden changes in policy as he has confronted the West over Ukraine and Russia’s influence in Eastern Europe. Earlier this year, for example, he publicly insisted the uniformed troops who began taking control of the Ukrainian region of Crimea in February had no connection to Russia. Later he acknowledged Russian troops had, in fact, been in Crimea. During the conflict in Eastern Ukraine he has moved Russian forces back and forth — in Russia and in Ukraine — in ways that suggest he is improvising rather than adhering to a careful gameplan. If Putin sometimes appears to be making up policy on the fly, maybe that’s because, according to a close former aide speaking to an American news organization for the first time, he is.

“Putin is not someone who sets strategic plans; he lives today,” says the former aide, Sergei Pugachev, a Russian businessmen once so well connected in Moscow that he was called the “Kremlin’s banker”. Pugachev, whose wealth at its peak was estimated by Forbes magazine to be $2 billion and who now lives in London, knew Putin when the Russian President was still working as an adviser to the mayor of St. Petersburg. They stayed close when the future President moved to work for the central government in Moscow, often meeting every day.

Pugachev had founded a bank in the dying days of the Soviet Union and in 1992, after the communist system had collapsed, he set up a new bank called Mezhprombank (International Industrial Bank) in Moscow. It’s unclear how this apparently unconnected, provincial figure managed to become a Kremlin powerbroker but by 1996 he was helping then President Boris Yeltsin win re-election and was acting as an adviser inside the Kremlin, which is how he met Putin.

“He’d always have well-sharpened pencils, a clean sheet of paper and a newspaper,” Pugachev says, remembering Putin from those days. “There were no documents, nothing. I had been in politics about 10 years and seen everyone. They’d have tons of documents. They’d always be doing something. But with him it was just quiet, no one there, no meetings, everything quiet. He’d sit there, or watch TV. He really likes watching TV.”

Pugachev did not think his new associate was particularly ambitious. “He had no plans, he didn’t aim to become President. He hadn’t thought of that. He didn’t plan to remain in the government at all.”

In 2008, Forbes rated Pugachev the 605th richest man in the world. He reportedly owned shipyards in St. Petersburg, a coal mine, luxury goods companies and acres of prime real estate. He was building a prestigious hotel in Moscow. And he was a senator in Russia’s upper house of parliament.

Pugachev’s position in Moscow collapsed in 2010, when the Kremlin began to forcibly purchase his businesses, causing him to flee to Britain in 2011.

In July a London court froze his bank accounts, following a request from Russia, allowing him a limit of £10,000 ($16,000) spending money per week. Russian prosecutors allege Pugachev siphoned money out of Mezhprombank, allowing it to go bankrupt. Pugachev denies the debts were his, saying he had surrendered control of the bank in 2001. He said Russia effectively invented the debts as an excuse to expropriate his assets. Russia is now attempting to seize more of his assets in return for what prosecutors say are unpaid debts. By way of retaliation he has decided to speak publicly about his former boss.

Putin, according to Pugachev, lives entirely from day to day. His enthusiasm for projects — such as the luxury hotel Pugachev was building — can be all-encompassing, but can also suddenly evaporate, with no explanation given. Putin cancelled the hotel project, according to Pugachev, despite having previously been so excited that he helped draw up the specifications for individual suites. Kremlin guards prevented Pugachev’s team even from retrieving their computers from the building site, which remains unfinished to this day.

Pugachev said such behavior was not out of character, and neither was Russia’s sudden annexation of Crimea earlier this year. “He was a black box, no one knew what was inside. I spoke to him almost every day probably, and if someone had asked me then whether what we have now is possible, I would have said no,” says Pugachev. “But there wasn’t some evil genius who thought this all up — this is just how he is.”

Pugachev said there were two main reasons why the Kremlin team chose Putin to be Yeltsin’s successor in the 2000 election. First, there weren’t any other options — almost everyone else had abandoned the ailing, alcoholic Yeltsin. Second, Putin was associated with the glamour of his former boss, Anatoly Sobchak, the ex-mayor of St. Petersburg who had a reputation as a courageous reformer and a democrat.

Putin’s accession came as a surprise to Russia’s big businessmen, who were nervous about the ex-KGB man’s intentions. Pugachev says he persuaded Putin to meet them in summer 2000, a few months after his election. Putin had been reluctant, but eventually agreed, provided he could specify the venue.

“I only found out about it two hours before the meeting,” Pugachev recalls. “I rang up and asked, ‘Where’s the meeting? In the Kremlin, or where?’ And he said: ‘No, I’ve decided to do this informally.’ The meeting was at Stalin’s dacha. That was very symbolic.”

The home of former Soviet leader Joseph Stalin — at Kuntsevo on the outskirts of Moscow — has been left almost unchanged since the dictator’s death in 1953. Pugachev says Putin had not been to the dacha before, so would appear to have chosen it purely for its symbolic value. Stalin was responsible for the deaths of millions and epitomised tyrannical leadership — facts not lost on the newly rich oligarchs. Oil tycoon Roman Abramovich — who has managed to preserve good relations with Putin to this day, unlike several of his fellow guests — presided over a barbecue. Conversation failed to flow.

“Afterwards I said: ‘Why didn’t you ask him anything?'” Pugachev says. “They replied: ‘What could we have asked? He’s a KGB agent. He took us to Stalin’s dacha. It’s enough that he let us leave. What else were we going to ask for?’”

Over the past 15 years, Putin has weakened most institutions in Russia that could act as blocks to his power: political parties, the media, the courts, the civil service, regulators and police. Putin gradually side-lined all the individuals he inherited from Yeltsin’s Kremlin. He is now surrounded by close friends, mostly from St. Petersburg and the security services, such as Vladimir Yakunin (head of Russian Railways) and Igor Sechin (head of the Rosneft oil company), who have reportedly become wealthy during his time in office.

If they want something, they get it, Pugachev said: from a Russian shipyard to a Ukrainian province.

The authorities’ light-fingered approach to private property has been one of many reasons why investors have been reluctant to leave their money in Russia. Capital flight is due to hit $85.3 billion this year this year, partly as a result of Western sanctions on Russian business. The rouble has lost around a fifth of its value against the dollar since the summer.

Russia’s economic problems do not worry the President, however, according to Pugachev. “Vladimir Putin does not understand economics. He does not like it. It is dry. It’s boring to hear these reports, to read them. He likes clear things: Russia’s moving ahead; how great everything is. He does not have a deep understanding of what is happening,” Pugachev says. “Putin’s close circle understands that he likes good news, so they always bring him good news. Whatever is happening, it’s good. For him, it’s enough to be in a good mood.”

Putin has now acquired a taste for power, Pugachev says, and warns that his former boss shows no signs of departing the political scene in the near future.

“It has become clear Putin does not intend to go to some island, to lie down and spend his money somewhere,” says Pugachev. “After all that has been done in the last 15 years, he cannot imagine life without Russia or power.”

Read next: Cease-Fire in Ukraine Fails and Preparations for War Begin 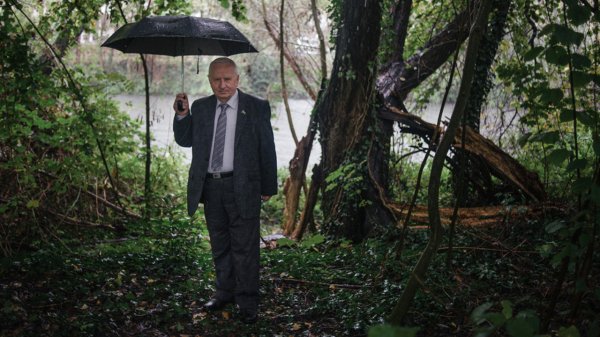 Chechen Dissident: I Survived Abduction by Putin's Agents
Next Up: Editor's Pick