Anne Rice won’t take credit for kicking off the current vampire boom in pop culture. “That’s something other people have to determine,” she says. “I always think an author sounds pretty bad if she claims credit for influencing a whole genre.”

She may also demur because as a writer of everything from two novels about the historical Jesus to series about witches and werewolves, she wants to be known for the full scope of her work. And yet without Rice’s excursions into the world of the undead–which began in 1976 with the novel Interview With the Vampire and continues with the release of Prince Lestat on Oct. 28–would there be, say, a True Blood? Her 34-book oeuvre, which includes five pseudonymous sexual-fantasy novels, has sold 100 million copies worldwide.

Not that Rice sees much of her approach to vampires reflected in the popular breeds of the 21st century. She only got around to watching Twilight this summer, and although she says she found HBO’s True Blood “pretty funny,” as a writer famous for her broodingly sensitive immortals who are more at home in European capitals than in casual dives, she doesn’t understand the more down-market bloodsuckers. True Blood “domesticated the vampire,” she says. “They made him the guy next door, the guy at the corner bar. And I thought, Wow, that never interested me.”

Besides, Rice says she stopped watching the show once she returned to supernatural fiction in 2012 with a werewolf tale, The Wolf Gift. Now, after more than a decade away from vampires, she is revisiting the genre for which she is best known with Prince Lestat, the 11th in her Vampire Chronicles series. In some of the earlier volumes, Rice’s bratty, glamorous bloodsucker has been moonlighting as a rock star inspired by Jon Bon Jovi. (Rice says she listened to his music every morning as she showered when she was writing Lestat; she also dedicated the book to him, among others.) But when this book opens we find Lestat in self-imposed exile, which he leaves only to unite the world’s vampires against potential destruction. For all that Rice purports to admire about True Blood and Twilight, it’s hard not to see some deeper meaning in Lestat’s return. Prince Lestat the character is helping save his kind from extinction. In the literary world, Prince Lestat is saving the undead from banality and overfamiliarity.

So a series that Rice thought she had brought to a close is now, she says, being “reinvented or reincarnated or rebooted–I don’t know what the word is.” Rice’s first two novels featuring Lestat largely followed him around 18th century France and New Orleans, but here he’s up to date, moving among a vampire community equipped with iPhones. “What interested me,” says Rice, “was that Lestat was larger than life–that when he comes into the room, everybody sees him as a god, and he has to tone himself down in order to function. But I always saw him as huge–a witness to the passage of time.”

Rice has borne witness to the same. Her manuscript for Interview With the Vampire was at first met with derision by publishers, she says. “It was really: ‘How dare you? You think you can write a serious novel in which everyone’s a vampire?'” Its publication in 1976 attracted a cult of readers but little serious consideration from critics. All the same, The Vampire Chronicles has been successful commercially, and is now the basis for a new film franchise that is getting under way with Universal. But that success has come at a cost: Rice believes she suffers the same lack of serious critical attention that best-selling contemporary authors like Jennifer Weiner and Jodi Picoult have complained of. “Once you hit No. 1 on the New York Times [best-seller] list,” says Rice, “I don’t think you get any interesting reviews after that! You just don’t!”

Rice–who has spent her entire career outside the New York City literary scene, peregrinating from New Orleans to a brief stint in La Jolla, Calif., to her current home in the California desert–prefers Amazon comments to literary criticism. She’s known for posting Amazon user reviews of everything from a biography of George Eliot and the first season of Game of Thrones to The Bourne Supremacy (all get five stars). “Of course, people look down on it. They think there’s too much off-the-wall, unqualified nonsense on Amazon. I don’t agree! I’m always amazed at what people put into their book reviews.”

In any case, Rice doesn’t need literary acclaim to place herself within a tradition of the haute supernatural, one that includes the Brontë sisters and Nathaniel Hawthorne. (Stephen King she calls a “pedestrian realist,” like Mark Twain or Ernest Hemingway.) Asked about her greatest literary influence, she cites a 1973 TV-movie adaptation of Frankenstein. “They were really doing it seriously,” she says, describing the movie’s elaborate title credits. “I loved the lusciousness and the extremism of that. Things like that fired me up. I didn’t really analyze it, I just said, ‘I want to write something that feels like that.'”

Rice is also active in online forums about Christianity and Catholicism, which she compares to “the La Brea tar pits”– alluring, but an easy place to get mired. Religion has been a lifelong interest for her, and a source of some confusion too. She was raised in New Orleans in what she describes as “a Catholic ghetto.” By the time she wrote Interview With the Vampire she considered herself an atheist, but she found her way back to the church in 1998 and seven years later published the first of her two Christ the Lord novels. Then she distanced herself again from organized religion in 2010. By that time she had walked away from Lestat and company too. Blood Canticle of 2003 was meant to be the last book in the series. “I associated them with depression, despair and grief,” Rice said of The Vampire Chronicles. “I said, ‘Enough! I can’t be a tortured soul with them anymore!'”

Today Rice is an unaffiliated believer. At her home in Palm Desert, a fountain with small angels graces her doorstep. She describes herself as an “ethnic Catholic” whose inborn religious faith works its way into her writing in a manner she calls “spontaneous and effortless.” “When you grow up with the Latin Mass and daily Mass and Communion, and you have aunts who are nuns and priests who are friends, and your dad got his education in the seminary, it becomes your mother tongue.”

And despite the supernatural aspects of The Vampire Chronicles, the books have their fans among the faithful. “There are a number of Christian friends who tell me I did a better job of talking about God in the vampire novels,” she says, “than I did in the Christ the Lord novels.”

Rice first learned that The Vampire Chronicles novels were considered by many readers to be a symbol for gay life when an interviewer from the Advocate told her so in the 1970s. “He started talking about the baths in New York and the basement of the theater of the vampires in the novel, and how all of this seemed like it was deliberately allegorical,” she says. “I probably struck him as a dumb interview subject, because I hadn’t been to New York!”

Like a victim in Lestat’s thrall, Rice says she writes in a fever, no matter the medium. When she posts on Facebook, it’s a first draft. When she writes a novel, she sees its influences only after the fact. Despite the fact that she was not practicing Catholicism when she wrote Interview With the Vampire, the church’s rituals and concerns with immortality found their way in. So, too, did her late daughter Michele, who died of leukemia at age 5 and who Rice has said inspired the child vampire Claudia. (Husband Stan died in 2002, and son Christopher remains, in Rice’s words, “co-owner of the franchise.” He is the best-selling author of seven thrillers.)

Perhaps the idea that even Rice can’t quite make sense of everything she writes about is why she’s so attached to every detail in her stories. At the beginning of their relationship, she instructed Knopf’s Victoria Wilson, her now longtime editor, not to alter her prose and only to introduce criticism that clarified Rice’s ideas. “Don’t overorganize, don’t be careful. Be a careless writer,” Rice recalls saying of her process. “I do look back and see stuff, and I’m kind of amazed.” With its through line of vampire novels and detours into religious writing, historical fiction and sex narratives, her career is just as freewheeling.

Rice practically insists on avoiding a plan–whether in her manuscripts or in her career. This makes her return to the undead, just as pop vampirism is reaching its zenith, feel all the more consequential, because it seems almost as if she’s compelled to do it by a cultural force and not her own ambition. And the forthcoming films with Universal, which begin with an adaptation of her 1992 Tale of the Body Thief, scripted by son Christopher, are certainly a gamble. Asked if she believes Hollywood will preserve the larger philosophical questions in her books, Rice replies, “Not at all. I don’t know. I love movies with my whole heart, and I’m willing to take the chance.” But Rice, whose relationship with God has survived years of edgy material and two departures from the church of her birth, has plenty of faith–and another trait too: hope. “Doesn’t it come through,” she asks, “that I’m an optimist? And I think we’re living in the greatest time ever?”

To read an exclusive excerpt of Prince Lestat, go to time.com/vampire 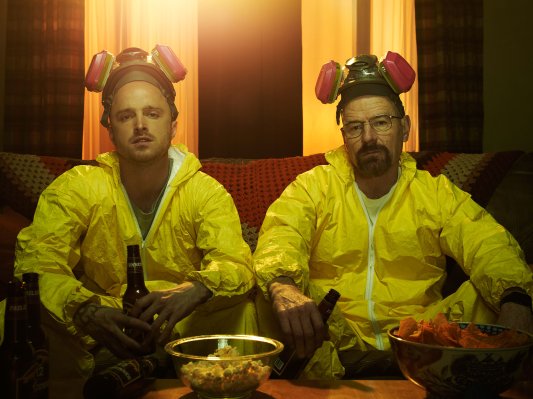 Cook Up Some Drug-Free Treats With the Breaking Bad Cookbook
Next Up: Editor's Pick