The ’60s had been a hell of a decade for Hugh Hefner and Playboy. By 1967, the magazine had gold-plated contributors like Vladimir Nabokov, James Baldwin and Ray Bradbury; a booming circulation of 4 million; and, to a remarkable degree, mainstream acceptance. The apotheosis of such broad welcome, perhaps, was the appearance of Hefner—or, rather, his cardigan-wearing, pipe-smoking statue equivalent—on TIME’s March 3 cover. In the upper left corner, over a yellow stripe partially obscuring the magazine’s T and I, are the words “THE PURSUIT OF HEDONISM.”

It had been nearly 11 years since TIME first noticed Hefner and his creation. Back then, in 1956, the nearly three-year-old magazine was a mere “sassy newcomer,” worthy of only a brief, admiring profile.

A decade later, when contributing editor Edwin G. Warner checked in with Hefner, Playboy Enterprises was a full-on publishing force:

Even despite that power, the idea that a mainstream publication—compared to Playboy at least—saw fit to put Hefner on the cover was surprisingly affecting, at least to one person: Hefner himself. Decades later, he recalls that the story meant something on a personal level. “My family subscribed to TIME and then LIFE,” he says. “Those were actually the magazines of record in my home.” (I interviewed Hefner once before, in 2003, on the occasion of an auction of Playboy Enterprises memorabilia, and spoke to him again recently.)

“Making the cover was a big deal. It was a very important moment in my life,” says Hefner. “The 1960s was a big deal in general for Playboy. Playboy really took off like a rocket.” Indeed, by 1972, the magazine’s circulation peaked at more than 7 million.

The TIME story, which clocks in at nearly 5,000 words, is delightful. It’s also somewhat shocking for containing copy and photos that almost certainly would not appear in the magazine today [Confirmed: the print magazine has a very strict nudity policy, and there’s a reason you’re not seeing those photos here, either. –Ed.] On page 81 is a photo of Playboy “Bunnies” sunbathing, in which one can clearly see breasts and buttocks.

I told Hefner I was surprised Warner had been given such access, particularly since, as a magazine man himself, he’d know that opening the kimono to a reporter is always a risk. “I, from time to time—when I trust people—will give them access to the workings of how we did what we do,” he said. Naturally, though, he casts a critical eye on the resulting story. “I think it is understandable that someone would be more critical of [a story about] something that they really know about,” he said. “I’m pleasantly surprised when they get it right.”

The statue that graces the cover, by Marisol Escobar, now sits in the National Portrait Gallery of the Smithsonian Institution. “I thought it was very classy,” said Hefner. “At the same time, I would have liked to have an actual photograph. I’m so cute!”

Read the 1967 cover story, here in the archives: Think Clean

Elon Green is a freelance writer. 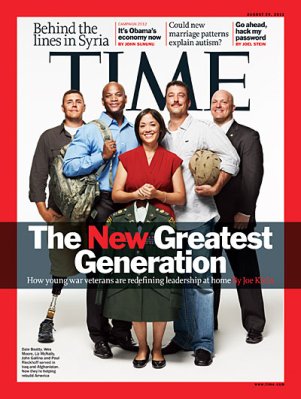