Pakistani activist for female education Malala Yousafzai attends a press conference ahead of the award ceremony for the 2014 World's Children Prize for the Rights of the Child at Gripsholm Castle in Mariefred, Sweden on Oct. 29, 2014.
Jonathan Nackstrand—AFP/Getty Images
By Eliana Dockterman

Malala Yousafzai, the Pakistani teen activist who recently won the Nobel Peace Prize, received another honor Wednesday and said she is donating the $50,000 in prize money to a United Nations agency that is rebuilding schools in Gaza following the summer conflict with Israel.

“The needs are overwhelming — more than half of Gaza’s population is under 18 years of age,” Malala said while being honored with the World Children’s Prize in Stockholm, according to a statement released by the U.N. Reliefs and Works Agency. “They want and deserve quality education, hope and real opportunities to build a future.”

Malala, who at age 15 survived being shot by the Taliban, has amassed a global following for work in the fight for girls’ right to education. The 17-year-old is the first person to receive the Children’s Prize and the Nobel Peace Prize in the same year. 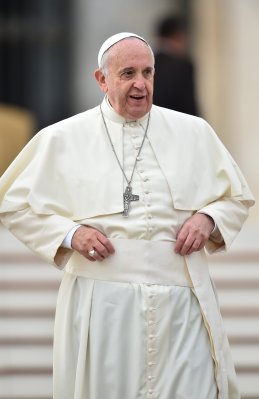 How Press Gets the Pope Wrong
Next Up: Editor's Pick