Ferguson Police Chief Tom Jackson begins to march with protesters before clashes led to arrests in front of the Ferguson Police Department, on Thursday, Sept. 25, 2014.
Robert Cohen—AP
By Alex Altman

The Ferguson, Mo. police department is denying reports that its chief is set to be replaced amid ongoing protests in a community bracing for a grand jury decision in the shooting death of Michael Brown.

“Nobody in my chain of command has asked me to resign, nor have I been terminated,” Ferguson police chief Tom Jackson told CNN, which reported late Tuesday night that Jackson would step down as part of a broad reorganization that would hand control of the department to the St. Louis County police. CNN, citing unnamed “government officials familiar with the ongoing discussions,” reported the move could come as soon as next week.

That was news to the Ferguson police department, which denied the report but left open the possibility that Jackson could vacate the post. “He has not been told to resign. He has not been fired. If he leaves, it will be his choice alone,” the department posted on Twitter.

Jackson did not immediately return a call or an email seeking comment on the report.

Officer Brian Schellman of the St. Louis County Police says his department is unaware of impending changes. “We have no knowledge of any of that,” Schellman says.

The report comes as the aftershocks of the Aug. 9 shooting continue to reverberate in the St. Louis suburb. A grand jury investigating the shooting of Brown, an unarmed 18-year-old, is expected to hand down a decision by mid-November on whether to indict police officer Darren Wilson on murder or manslaughter charges. In recent weeks, the protests have regained steam amid a series of leaked reports that appeared to corroborate Wilson’s claim that the shooting came after Brown assaulted the officer. Local officials say they are worried about the protests that may erupt if Wilson is not indicted.

Jackson has come under withering criticism for his handling of the shooting. As riots roiled the St. Louis suburb in the days after Brown’s death, Jackson resisted the intense pressure to identify the officer who shot him. When he finally fingered Wilson six days later, he did so while releasing a video of an unrelated robbery Brown committed before the attack—which critics considered an attempt to taint the reputation of the dead teen.

The shooting released a wave of mounting frustration between Ferguson’s largely African American population and its heavily white government and police force. Residents have raised questions about what they say is a pattern of racial profiling and the Justice Department has opened a broad civil rights investigation into the Ferguson police department. Outgoing U.S. Attorney General Eric Holder, who visited the troubled city in the aftermath of the shooting, has said his department is investigating the Ferguson force’s record of stops, searches and use of force against residents. Statistics indicate the police force has targeted African Americans at a disproportionate rate. 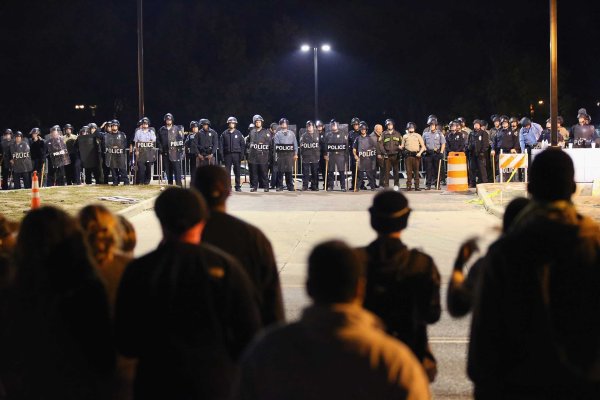