It’s been a big week for Taylor Swift. Since Monday, she’s released a new album, 1989, announced her new position as Global Welcome Ambassador for New York City, and served as a guest coach on The Voice. She continued the streak last night with a performance of “Welcome to New York” on Late Show with David Letterman.

In her interview with Letterman, Swift discussed her enthusiasm for New York, the genesis of her friendship with Lena Dunham, and why she invited several hundred fans to listening parties in the living rooms of all three of her abodes. Of her appointment as the face of New York City tourism, she imagined how the powers-that-be decided to choose her. “She’s the most enthusiastic, obnoxious person to ever love New York,” she said of herself. “She loves it with, like, 18 exclamation points after it, underlined.”

Watching these two sharing a stage is the very picture of old New York meets new New York. Letterman’s been an institution for decades, whereas Swift moved into her downtown apartment just last winter. But as he congratulated her on her performance, he caught their image in a monitor and gushed, “Look at what a lovely couple we make.” Let’s assume he meant, “What a lovely couple of New Yorkers.”

Swift’s week should end on an even better note than it started on: Her album is expected to sell more than 1 million copies by the time we turn the clocks back this weekend. Hopefully we won’t wake up Sunday morning to find that it’s 1989. 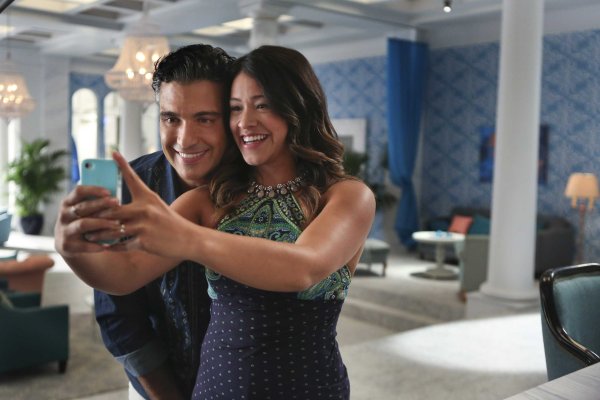 Jane the Virgin Is the Keeper of This Fall Season
Next Up: Editor's Pick