A Comic Book Dummy's Guide to the Marvel Universe Plan

On Tuesday, Disney’s Marvel Studios made some major announcements about the future of its superheroes on the big screen. Studio head Kevin Feige laid out the plan through 2019, and it includes some very obscure superheroes. While comic book fans everywhere are pumped, the millions of people who paid to make the Iron Man movies blockbusters probably don’t even know who Captain Marvel is, or how the big purple guy from the Guardians of the Galaxy movies relates to the Infinity Gauntlet.

So for those of us who aren’t comic book experts, here’s a breakdown of who these new superheroes are, what the Avengers’ next adventure might be, and what the next five years of summer movies will look like.

Let’s start out with the core of Marvel’s empire: the Avengers. A quick refresher on this crew: the Agents of S.H.I.E.L.D. (which now have their own television show) led by Nick Fury (Samuel L. Jackson) bring together the Avengers Initiative: Iron Man (Robert Downey Jr.), Thor (Chris Hemsworth), Captain America (Chris Evans), the Hulk (Mark Ruffalo). These superheroes are assisted by agents Black Widow (Scarlett Johansson) and Hawkeye (Jeremy Renner). In the last movie, they saved the world from Thor’s brother Loki who used an object called the Tesseract to build a wormhole and invade earth.

So now that we’ve dispatched of the Tesseract, what’s next? The titular villain in the sequel, Ultron, is a machine originally created by Dr. Hank Pym, who was once Ant-Man (more on that in a second). Ultron became sentient and rebelled, as machines always tend to do in these sorts of situations. Ultron’s ultimate goal is total destruction of the human race, and he’s arguably the Avenger’s biggest adversary in the comics. He’ll be played by James Spader in the movie.

Since we’re on the topic of Hank Pym, let’s talk Ant-Man. The premise of the film is that a con man and electronics expert named Scott Lang (Paul Rudd) receives the Ant-Man costume and technology from his mentor Hank Pym (Michael Douglas). Ant-Man is able to reduce himself to the size of an ant while gaining superhuman strength, and can will other objects to change size. He also has a cybernetic helmet that allows him to communicate with and control insects. (Useful!)

The casting of Rudd (Role Models, Knocked Up) and tapping of director Peyron Reed (Bring It On, Yes Man) indicates that the movie will have a strong comedic element.

Thanos in Marvel's Guardians of the Galaxy
Film Frame/Marvel Studios

Yes, Age of Ultron is still half a year away, and we’re already talking about the third Avengers movie. Or, rather, the third and fourth Avengers movies. Marvel announced that The Avengers: Infinity War will be released in two parts because — well, why not?

The big bad in Avengers: Infinity War will be Thanos (Josh Brolin), first seen at the very end of The Avengers and again as an evil puppet-master in Guardians of the Galaxy who adopted and raised Gamora (Zoe Saldana). This hasn’t come up in the movies yet, but in comic book lore, Thanos is in love with the Mistress Death (the female embodiment of death — yes, really) and wants to impress her by killing everyone in the galaxy.

How does Thanos plan to do this? Well, he possesses this thing called the Infinity Guantlet — basically a metal glove encrusted with a lot of powerful gems that gives him power over time, space and all living beings. Yep — that’s a pretty serious weapon. Presumably Thanos doesn’t have all the gems he needs; otherwise, there would be no movie. Feige has said that the Tesseract from The Avengers was actually one of the Infinity Stones needed to make the gauntlet work, and so was the stone everyone’s trying to get their hands on in Guardians.

Given that Thanos has already appeared in two Marvel franchise, this movie is likely going to have a lot of superheroes in it.

Thor: Ragnarok will have Thor’s Chris Hemsworth facing off against…Chris Hemsworth. Ragnarok is an evil cyborg clone of Thor created by an unexpected source.

The other major news in the world of the Avengers heroes is that Captain America 3 will follow the “Civil War” comics storyline. At this point, any interpretation of what that means is speculation, but here’s how it plays out in the comics.

After a superhero-related disaster, the U.S. government puts its foot down: all superheroes will have to register with the government. No more secret identities. Obviously, this is controversial among the masked men and women. Superheroes take their sides: Tony Stark becomes the poster boy of the government’s plan, while Captain America (despite his name) believes this is the first step towards fascism in America and goes underground. It’s at this point that Ragnarok comes into the picture, though I won’t spoil how.

Basically, expect some sort of supremely watchable epic battle between Robert Downey Jr. and Chris Evans. People are very excited about this.

Black Panther will be the first lead black superhero in a Marvel movie. (Up until now, Samuel L. Jackson as Nick Fury, Don Cheadle as Rhodey, Idris Elba as Heimdall and Anthony Mackie as Falcon have all played sidekick-type roles in the films. That may change in the upcoming Captain America movies, since it’s rumored that Mackie will get to take up the role of Captain America at some point.)

T’Challa, a.k.a. Black Panther, hails from the fictional country of Wakanda, a technologically advanced African nation. In the comic books, the Black Panther title is given to the chief of the Panther Tribe in Wakanda, which T’Challa’s father, T’Chaka, holds at the time of his birth. His father is later killed by Klaw over a a rare metal T’Chaka discovered called Vibranium. (Coincidentally, Captain America’s shield is made from this metal.) T’Challa, who has no superpowers, begins to train to avenge his father. He ends up living a double life in Wakanda and in America, where he befriends the Avengers. (He also has a relationship with X-Men’s Storm in the comic books, but since Marvel Studios doesn’t own the rights to X-Men, I doubt she’ll be showing up.)

The role of Black Panther will be filled by Chadwick Boseman, who’s played James Brown in Get on Up and Jackie Robinson in 42. And Marvel’s going all in with this hero. According to Deadline, he has signed up for five — yep, five — films as Black Panther (including, presumably, some Avengers films).

Finally, Marvel Studios is making a woman-led superhero movie. Though the title of Captain Marvel has been held by men for many decades, in 2012, the mantle passed to a female character named Carol Danvers, previously known as Ms. Marvel. Danvers is part human and part Kree, an alien race you may remember from Guardians of the Galaxy. She trained in the Air Force, can fly, has super-strength and has been kicking ass since feminist comic book writer Kelly Sue DeConnick started penning her series.

Marvel is playing catch-up when it comes to female superheroes: Warner Bros. has already announced a Wonder Woman movie starring Gal Gadot (who will also appear in 2016’s Batman v. Superman: Dawn of Justice), and Sony has a movie based on a female character from the Spider-Man universe in the works. Feige struggled this summer to answer why they hadn’t already made a female led movie, but hinted that something like this was coming.

What about Black Widow?

The Captain Marvel announcement comes as something of a surprise, given that Marvel already has a major female superhero in its film arsenal: Scarlett Johansson’s Black Widow. Black Widow, or Natasha Romanoff, works for the spy agency S.H.I.E.L.D. and has appeared in Iron Man 2, The Avengers and Captain America: Winder Soldier. Fans have been lobbying for Black Widow to get her own franchise, but Feige says they shouldn’t hold their breath.

“Black Widow couldn’t be more important as an Avenger, but like Hulk, the Avengers films will be the films where they play a primary role,” said Feige. “Her part in Avengers: Age of Ultron is very, very big and further develops her character. The plans we have for her through the rest of the Avengers saga are very big and she is a linchpin, in fact, to those films. So instead of taking her out there or doing a prequel which we haven’t done yet, we’re continuing the forward momentum of the continuity of the Cinematic Universe, of which Widow is a key part.”

The Inhumans movie will introduce dozens of new superheroes. The comic focuses on the royal family of the Inhuman race — the result of aliens called the Kree (again, see Guardians of the Galaxy) experimenting on Earth’s primitive homo sapiens to create genetically superior people. The Inhuman royal family is headed by Black Bolt, who can level a city with his voice.

Marvel is officially headed for the supernatural realm — and there’s a possibility that Benedict Cumberbatch will be at the helm.

Doctor Strange starts out as an arrogant surgeon, then gets into a car accident that destroys his hands. (Those are kind of an important asset for a surgeon.) Desperate to find a cure for the loss of his fine motor skills, he searches the darkest corners of the world for a solution. Eventually he meets a person called The Ancient One who introduces him to the mystic arts. Eventually, Doctor Strange becomes the guy you turn to when you need to battle magical forces.

This movie promises a lot of psychedelic CGI. Expect it to be very different from the Avengers films. But Marvel proved this summer that it can succeed when it ventures off the beaten path. Which brings me to…

Guardians of the Galaxy
Marvel

Unless you spent this summer under a rock, you probably saw Guardians of the Galaxy, the highest-grossing movie of the year so far. And the Guardians are starting to serve as sort of a lynch pin for this whole universe; the Kree, which we first met this summer, pop up in the Inhumans and Captain Marvel origin stories. So though they seemed like a joke when that video of Bradley Cooper voicing a raccoon surfaced, they’re kind of a big deal now. For those of you who didn’t make it to the first movie, here’s the cast of rag-tag characters that will be returning in May 2017:

Peter Quill, a.k.a. Star-Lord (Chris Pratt): Kidnapped from earth as a kid, Quill is a human who becomes the leader of the Guardians.

Gamora (Zoe Saldana): The last of a race called the Zen-Whoberi, Gamora was hand-groomed as an assassin by the villain Thanos. But she turned on her adopted father to join the Guardians and is commonly known as the Most Dangerous Woman in the Universe.

Drax (Dave Bautista): A superhuman warrior out to avenge his murdered family.

Rocket Raccoon (Bradley Cooper): A talking raccoon with a fondness for large guns.

Marvel licensed out the rights to Spider-Man to Sony long before it created its own studio. Though Feige didn’t make any announcements at this event, Marvel and Sony have reportedly been in talks to jointly own the character, allowing for a Spider-Man crossover into the Avengers universe. 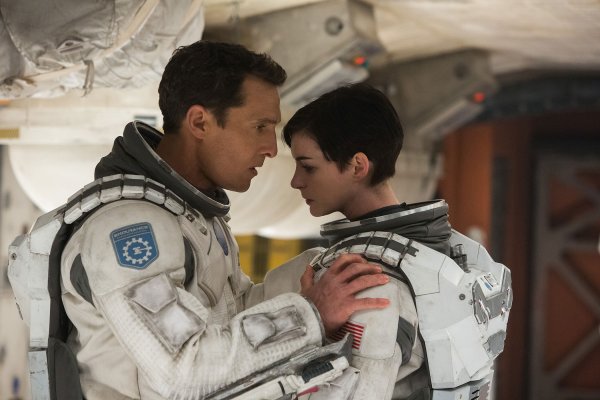