Giant Tortoises Are Back From Near Extinction

A giant turtle is pictured at the zoo in Duisburg on Sept. 24, 2007.
Ina Fassbender—Reuters
By Jack Linshi

Giant tortoises endemic to the Galapagos Islands are back from near extinction, according to a study published Tuesday in PLOS One.

The Espanola giant tortoises, a species that can live for over 100 years, had numbered in the thousands but dropped to 15 by 1960 due to human exploitation, the study said. Between 1963 and 1974, conservationists brought the 12 female and three male surviving giant tortoises into captivity. Over 1,500 of their offspring have since been released onto the island, and the species’ survival no longer requires human intervention, scientists said.

“The population is secure. It’s a rare example of how biologists and managers can collaborate to recover a species from the brink of extinction,” said James P. Gibbs, the study’s lead author and a professor of at the State University of New York’s Environmental Science and Forestry, in a press release.

Reintroducing the giant tortoise population not only promotes biodiversity but also restores their position as “ecosystem engineers” who disperse seeds and other organisms, according to the report. While the population is stable, the number of Espanola giant tortoises is not likely to increase substantially until other problems in the environment, such as the overgrowth of woody plants, are resolved. 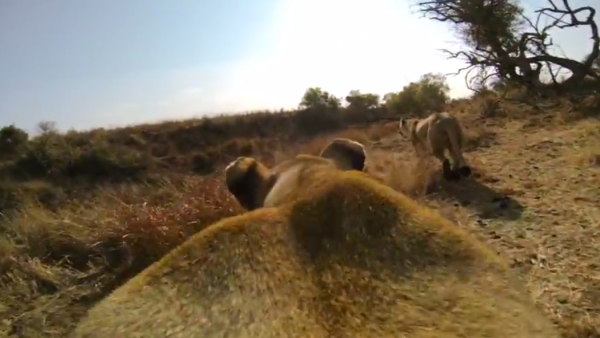 This Video Shows What It's Like to Go Hunting as a Lion in the Wilds of Africa
Next Up: Editor's Pick