President Barack Obama did his best on Tuesday to remind Wisconsonites why they twice elected him President, only this time he turned on the full court press for Democratic gubernatorial candidate Mary Burke.

“She will be your next governor as long as folks vote,” Obama told an overflow crowd before the event. “We need you to go talk to your friends, your neighbors, you coworkers. You got that cousin on the couch who’s watching the ol’ Packers games, but doesn’t always vote during the midterms. You have to go reach out and tell people that they’ve got to exercise their franchise, they’ve got to be good citizens.”

The event was at North Division High School, in a ward where Obama outpolled Republican Mitt Romney 843 to 5 in the 2012 presidential election, according to the Milwaukee Journal Sentinel. The somewhat risky bet that Burke is making is that Obama, polarizing as he is, will help turn out Wisconsin’s urban Democratic base for her next Tuesday.

“Wisconsin is one of the most polarized states in the country and this race has been close for months,” says Nathan Gonzales, who follows gubernatorial races for the nonpartisan Rothenberg Political Report. “When a race is this close anything could be deciding factor. The Burke campaign is making a calculated risk that having president Obama campaign for her will be a net boost on turn out and we’ll see on election day if that was the right decision.”

Burke is one of the very few candidates to welcome Obama, whose unpopularity in the polls has made him somewhat of a pariah amongst vulnerable Democrats in tight races. But Wisconsin’s labor-heavy, populist base hasn’t always loved Burke, a millionaire former executive at her family’s company, Trek Bicycle. Thus the gamble with Obama, whose presence risks putting off independent and suburban voters.

Walker, who is reviled by Wisconsin Dems who tried to recall him after he pushed through union-busting legislation, was quick to note that Obama is the fourth Washington surrogate to campaign for Burke in recent weeks. Former President Bill Clinton packed a Hyatt ballroom with nearly 1,000 supporters for Burke last week. First Lady Michelle Obama has made two visits. And Massachusetts Sen. Elizabeth Warren has also put in an appearance.

“I think it reflects the fact that she’s the candidate of Washington. We’re not bringing Washington surrogates in,” Walker told reporters after an event Tuesday in Wausau.

At the same time, Walker isn’t without some outside help himself, though he’s been complaining about how he’d like more help. Walker, who is scheduled to campaign the Republican Governor’s Association Chair Chris Christie back in Wausau on Friday, on Monday dinged Christie for not providing enough support, only to walk it back hours later.

“Let me be clear: When I complain about the national groups that come in, I by no means am complaining about the RGA,” Walker told reporters. “Gov. Christie’s a good friend. He’s the only person I’m campaigning with this week who’s not from Wisconsin, and that’s because he’s a friend and he asked if he could come to the state and campaign.”

Walker is leading Burke by 0.2%, according to a Real Clear Politics average of Wisconsin polls. And he hardly suffered from financial neglect. RGA has spent more than $20 million for Walker. $5.2 million in 2010, $8.9 million in 2012 and $8 million in 2014. If you add up all the outside spending, Walker has a $4 million advantage, according to a GOP source.

“We’re one week out and Scott Walker is launching his ‘Women for Walker’ bus tour and releasing a TV a touting his support for equal pay after repealing the state law,” says Marcy Stech, a spokeswoman for Emily’s List, a group that works to elect pro-choice women. “Mary Burke, however, has a real message to run on – one that provides economic opportunity for hard working families, that’s a message that is electrifying crowds across the state.”

Nationally, Democrats have focused on turning out unmarried women, a demographic that reliably votes Democratic but rarely shows up in off-presidential year elections. In some races, Democrats lead by double digits amongst women.

But Burke enjoys only a slight edge with women, 48% to Walker’s 47% according to the most recent Marquette Poll out Oct. 15. Obama, who remains relatively popular with unmarried women nationwide, could help change that. “This is one of the closest races in the country,” says Jennifer Duffy, who follows Senate races for the nonpartisan Cook Political Report. “If the President is going to Wisconsin, it is a sign that strategists believe he can motivate drop off voters. In a race this tight, every vote is going to matter.”

It was a point Obama certainly drove home in the lively campaign event. “Four years ago, Democrats lost the governor’s race in Wisconsin by just 10 votes per ward. Ten votes. Hmm-mmm,” he said, arching a brow as the crowd laughed. “Ten votes. Ten votes could be the difference between an economy that works for everybody, or an economy that just works for the few. Ten votes could decide whether nearly 600,000 Wisconsin workers are denied a raise, or whether they get the raise they deserve. Ten votes could decide whether tens of thousands of Wisconsin families remain without health insurance, or whether they finally get a chance to go see a doctor. Your vote will decide the course that Wisconsin takes.” The crowd roared its approval.

–With reporting by Zeke Miller in Washington. 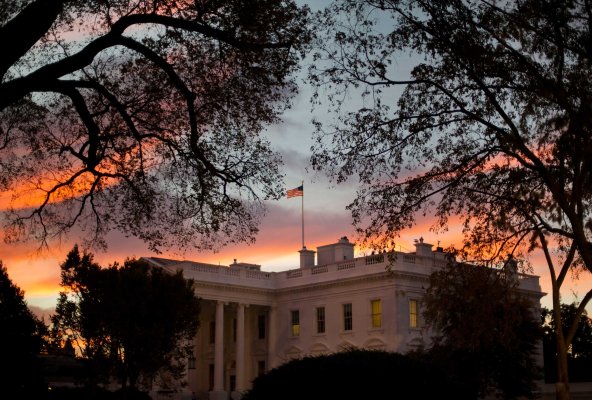