How to Get OS X Yosemite's Best Feature to Actually Work

We’ve all been there: You’re poking away at your iPhone when an email comes in. You check the message and decide to dash off a quick reply. But then things get complicated. There’s cutting, pasting, and backspacing. You wish you had replied on your Mac, which is two feet away — but it might as well be two miles from you, because there’s no way you’re abandoning this half-written response.

Handoff, a new feature in OS X Yosemite, makes it possible to quit thumb-strumming that iPhone email and pick it up on your computer, exactly where you left off. Here’s how to make it work.

Step 1: Get the Gear

It wouldn’t be an Apple innovation if it didn’t leave some users feeling left out in the cold. Apple hasn’t posted any technical specifications for Handoff, but the key requirement seems to be that every device needs to have Bluetooth 4.0, also known as Bluetooth LE. This low-energy Bluetooth allows the iPhones, iPads, and Macs to connect to each other wirelessly without eating away at your battery in the process. Compatible Macs include those released between mid-2012 and now. On iOS, compatible devices include iPhones as old as the 4s, the fourth generation iPad, both iPad Airs, all the iPad Mini models, and even the fifth generation iPod Touch. If you have those any of those, make sure your Bluetooth connectivity is turned on in Settings on the iOS hardware and in the System Preferences on your Mac. Also, your iDevices need to have iOS 8 installed.

Using the same Apple ID login, sign into Apple’s iCloud services on your computer, phone and/or tablet. (Note: After following all these steps, if your Handoff-compatible devices still don’t detect the feature, logging out of iCloud on the Mac, iPhone and/or iPad is a good way to “reset” the computers’ connection to this service. Then, once they are all disconnected from iCloud, wait about ten seconds, and log them back in.)

For such a heralded new feature, Handoff’s settings are buried pretty deep in the devices’ preferences. But because of Apple’s “it just works” mentality, it’s possible that the service has already activated on your devices by default.

On your Mac, open the System Preferences, click on General, and then look near the bottom of the window to toggle on “Allow Handoff between this Mac and your iCloud devices.” If the option isn’t there, then your computer isn’t compatible with Handoff. On your handheld Apple gear, tap on Settings, then General, and finally Handoff & Suggested Apps. Toggle the Handoff switch to the “on” (or green) position.

Below that setting on iOS, there are also toggles for Suggested Apps. These allow other, unfamiliar computers to suggest apps to you in a manner that’s similar to how Handoff works. For example, if you’re at Starbucks, the store’s computer can push their app to your lock screen, “suggesting” you download and use it for convenience’s sake. But some users may feel like this is pushy or a privacy issue — those people should switch the bottom two toggles to “off.” Disabling Suggested Apps will not affect using Handoff on your personal computer.

If all of the background technology did what it’s supposed to, Handoff is activated and already operating. You’ll know because app icons will start popping up in new places.

For example, when you’re browsing the web on your iPhone, a Safari icon with a tiny iPhone badge will appear to the left of the Finder icon in the Mac’s dock. Alternatively, if you were on your computer working on a spreadsheet in Numbers, upon waking your iPad you’d find a small Numbers icon at the bottom left of the iOS lock screen (if the Numbers app is installed on your iPad). Swipe that icon up (or click on the Dock icon on your Mac), and it will open not only the app, but also the spreadsheet you were working on at the computer. Or, if your iOS device is already unlocked, double-tap the home button to open the App Switcher, then swipe right, past the home screen, and you’ll get a second chance to hand off your computer’s app to your handheld.

Handoff isn’t just a hack for Apple-made programs; it currently works on a small but growing number of third party iOS apps, including news apps VICE News and the NYTimes (which open the Grey Lady’s stories in Safari on the Mac) and Wunderlist (which has both OS X and iOS apps). But there will certainly be more uses for this technology to come as developers get their hands dirty coding more Handoff-enabled apps.

Read next: These Are the 5 Coolest Features of OS X Yosemite 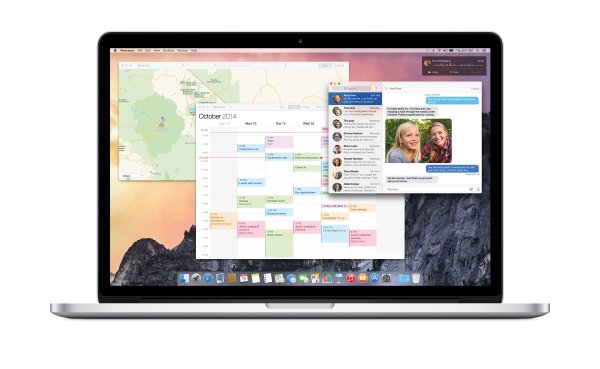 These Are the 5 Coolest Features of OS X Yosemite
Next Up: Editor's Pick