At the height of the Cold War, Nikita Khrushchev, the Soviet premier, wanted to go to Disneyland.

Khrushchev was visiting the U.S. that September on a tour of the enemy nation, a chance to meet with President Eisenhower but also to see what America was all about. The itinerary was varied and was supposed to include, as this exclusive clip from PBS’ “American Experience” special Cold War Roadshow shows, that amusement-park visit — which was cancelled, to the visitor’s dismay, over security concerns. And to whom did he complain? The guests at a fancy lunch thrown in his honor, who included Marilyn Monroe. Hundreds of journalists were on hand to follow Khrushchev everywhere he went, and they captured the movie star as well (giving, in this clip, pretty much the least scintillating interview ever).

Khrushchev’s visit to Hollywood also included a set visit to see the musical Can-Can being filmed, something star Shirley MacLaine had been prepping for. As TIME reported on Sept. 21, 1959:

By the time the “Butcher of Budapest” was ready to go back home, Soviet newspaper Pravda was reporting that the attitude toward him in the U.S. had clearly changed — and TIME was backing that up by reporting on Khrushchev’s take on his first hot dog (“”Well, capitalist,’ he boomed to Official Escort Henry Cabot Lodge, whom he needled throughout his trip, ‘have you finished your sausage?'”), his decision to swap hats with a longshoreman and his joking with Iowa farmers. The good will between the U.S. and the USSR wouldn’t last, however: a U.S. spy plane was caught in Soviet airspace before the year was up, so Eisenhower’s planned trip to do the same glad-handing in Russia was nixed. 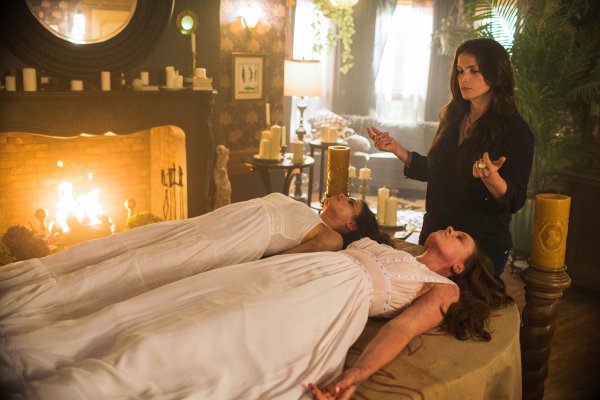 Why Witches on TV Spell Trouble in Real Life
Next Up: Editor's Pick