She may hail from Pennsylvania and draw the strongest associations with Nashville, but Taylor Swift is New York City’s newest ambassador for tourism. NYC & Company, the city’s official marketing and tourism organization, announced Swift’s new role this morning, launching a series of promotional videos in which the singer defines essential New York vocabulary — such as “stoop” and “bodega” — and explains her connection to the city.

“New York kind of pulled me here like a magnet,” she says. “I was intimidated by the fact that it was bright and bold and loud. And now I know that I should run towards things like that.” Swift says the city was integral to the development of her new album, 1989, inspiring her songwriting and providing the backdrop for a period in her life characterized by possibility and excitement. If the album’s first track, “Welcome to New York,” wasn’t written in anticipation of this new gig, it certainly sounds like it could have been.

As Swift herself sings, “Haters gonna hate,” and the response to her ambassadorship for a city she’s barely lived in has been mixed. Swift moved to New York only recently, and she splits her time between Manhattan, Beverly Hills and Nashville. New Yorkers are notoriously stingy in awarding the label “New Yorker” to anyone who wasn’t born and raised among them, and Swift’s recent arrival gives her more in common with the tourists she’s attempting to attract than the residents of the city itself.

So no, she’s by no means a logical choice, if we’re basing logic on street cred alone. There are countless entertainers with strong ties to the city who might have better appeased New Yorkers (see Jay-Z and Alicia Keys, whose New York-themed anthem is among the most beloved in years). But that’s just it: NYC & Co. is not looking to appease the people who already live here. They’re looking to draw the people who don’t — 55 million each year, to be precise.

And besides, New York is a city of immigrants and transplants, made interesting by its intermingling of newcomers and originals. NYC & Company’s press release makes ample use of the word “welcoming,” a preemptive retort to those who would be anything less than hospitable to one of its newer residents. As Swift sings in “Welcome to New York,” “Like any real love, it’s ever-changing.” 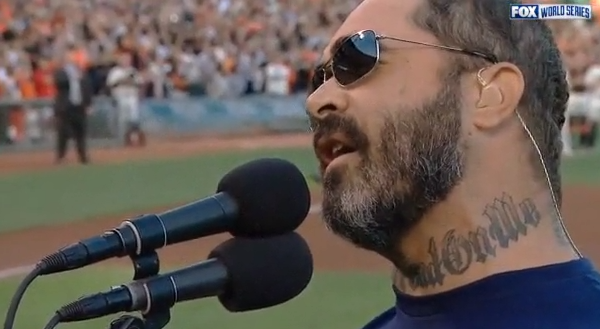 The Lead Singer of Staind Is Very Sorry He Totally Screwed Up the National Anthem
Next Up: Editor's Pick