America’s teachers aren’t rotten apples, as Time’s cover suggests, that need to be smashed by Silicon Valley millionaires with no experience in education. Far from it. America’s teachers are national treasures, doing the most important job in our country—educating children for today’s democracy and tomorrow’s economy. They are making the promise of public schools a reality. Unfortunately, too often, they’re making it happen without the resources, support or trust they need to get the job done.

Yes, there is a real problem facing America’s teaching profession, but it has nothing to do with tenure. The problem is in recruiting, retaining and supporting our teachers, especially at the hardest-to-staff schools.

Every time we lose a teacher, it costs us. Literally. More than one-third of teachers leave the profession before they’ve taught for five years. The National Commission on Teaching and America’s Future estimates that the high rate of teacher turnover nationwide costs more than $7 billion per year. This only exacerbates the greatest challenges facing our public schools: underfunding and inequity.

Our economy is changing quickly. Education funding in many states has been diminished. Our student population is more diverse, yet our schools are more segregated. Poverty is on the rise. For these reasons and more, great teachers have never been more important. Yet, new research finds that teachers in the United States earn less and work longer hours than those in other nations.

So, how do we recruit, retain and support great teachers? Certainly not by bashing them. There is no evidence that wiping out due process—more widely known as tenure—for K-12 teachers is going to make a more effective teaching corps. In fact, it will do the opposite. We know that the states with the highest academic performance have the strongest due process protections for teachers. Research shows that our most at-risk kids need more-experienced teachers. But why would these teachers stay at schools with few tools, little support and no ability to voice their concerns?

As Dana Goldstein, the highly acclaimed author of The Teacher Wars, wrote, “For high-poverty schools, hiring is at least as big of a challenge as firing, and the Vergara decision does nothing to make it easier for the most struggling schools to attract or retain the best teacher candidates.”

Tenure is not a job for life. It’s ensuring fairness and due process before someone can be fired, plain and simple. Where it’s become more than that, our union has worked to change laws and contracts. Because no one, particularly not teachers, wants people in our profession who aren’t cut out for it or shouldn’t be there.

Due process means the teacher at a high-poverty, low-resourced school can fight for new schoolbooks or needed services for her kids. It’s a shield for the teacher who tells her boss that her special needs students deserve art and music. It’s a safeguard for the teacher who wants to get creative and use “Mean Girls” to explain the power dynamics in Julius Caesar. It’s what teachers—who aren’t paid enough or praised enough—need to do their jobs well.

Even Campbell Brown—who is leading the fight to eliminate due process in New York—when asked if she worried that “removing tenure might harm efforts to attract high-quality teachers,” said “Sure.”

Here’s what Time’s cover story didn’t tell you: Two-thirds of what affects student achievement actually occurs outside the classroom. That’s why we need to talk about poverty, about segregation, about violence in our neighborhoods and in our schools.

We need to talk about the woeful lack of funding our schools receive. Sadly, at least 30 states are funding education at a lower level than before the recession. Federal Reserve Board Chair Janet Yellen recently noted that America has “one of the few advanced economies in which public education spending is often lower for students in lower-income households than for students in higher-income households.”

Instead of hammering teachers, let’s smash inequality and underfunding. Let’s work together to do what evidence and common sense tells us works to help children succeed: Support and preparation for educators. Manageable class sizes. Time to collaborate. Rigorous standards with engaging curricula, including art and music. Early childhood education. Career and technical education. More project-based learning, less testing. Wraparound services to address kids’ social, emotional and health needs. Family and community engagement. Let’s work together to reclaim the promise of public education for all children.

Billy Easton, the Executive Director of the Alliance for Quality Education, responds here. 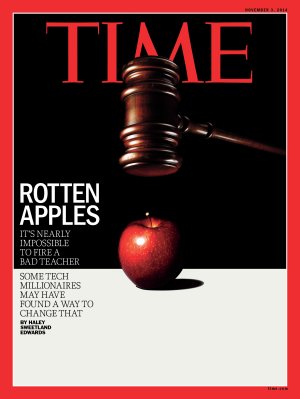