It’s never a wise move to pick a fight without knowing your opponent. When Chris Christie ordered a mandatory quarantine for health-care workers returning from West Africa, he might have thought his foil was a lethal virus or an unpopular president or some feckless federal bureaucrats who failed to keep Ebola from arriving in the U.S. Instead the New Jersey Republican found himself battling a brave nurse, who captivated the country as she skewered the policy from behind the plastic screen of an isolation tent in a Newark hospital.

Kaci Hickox won the fight. By Monday morning, she was on her way to a cozier confinement at home in Maine. And Christie was scrambling to explain why he had penned her up against the advice of medical experts, who said she posed no threat, and the wishes of Obama administration officials, who argue a forced 21-day quarantine could deter the nurses and doctors who are desperately needed to stamp out the outbreak in West Africa.

Christie’s decision capped a head-snapping weekend of walk backs from the New Jersey governor and New York Democrat Andrew Cuomo, his counterpart from across the Hudson River. On Friday night, the bipartisan pair held a hastily planned press conference to decry federal safety guidelines as insufficient and order high-risk travelers to submit to mandatory quarantine.

Now both governors have flipped, or at least softened a stance whose goal in the first place was to project toughness. Christie’s move to send Hickox home on Monday came mere hours after Cuomo’s own change of heart, announced at a strange Sunday night news conference in which the governor and New York City Mayor Bill De Blasio referred to each other as “doctor” with barely veiled passive-aggression.

Left to scrambling to explain the decision, Christie denied it was a reversal at all. He said Hickox was kept in the sad tent with the portable toilet and no shower simply because she had no residence in the state. “Our preference always is to have people quarantined in their homes,” he explained Monday morning, “but you can’t take chances on this stuff and allow people who may, in fact, be contagious to be able to travel.”

The shift may have been more tonal than substantive. But it seemed like Christie and Cuomo had let politics trump policy, only to find the politics of the quarantine weren’t great after all. What’s more, the shift followed pressure from the Obama Administration, which warned the governors over the weekend of its “concern with the unintended consequences of policies not grounded in science,” according to a senior administration official. Hours earlier, Christie had slammed the Centers for Disease Control and Prevention (CDC), calling its safety protocols for Ebola “a moving target.” Now he is letting doctors and federal officials determine that Hickox, who threatened to sue over the forced confinement, can be sent home.

The episode illustrated the unpredictable risks of playing politics with a lethal virus. In a campaign season that has been more fear than hope, Ebola becme the boss villain in the parade of horribles—from the rise of the Islamic State to the rocky economy to the “war on women.” Politicians from both parties have pandered to the anxieties of the electorate, jockeying to position themselves as tough leaders capable of keeping voters safe in the absence of presidential leadership.

The impulse must be particularly tempting when you face a referendum on leadership yourself. Cuomo, who is thought to harbor national ambitions, first faces a re-election test on Nov. 4. So does Illinois Gov. Pat Quinn, another Democrat fighting for re-election who followed suit by imposing his own quarantine policy.

For Christie, the panic wrought by the lethal virus may have seemed a prime opportunity to run his favorite play: the one where the tough leader takes a common-sense stand in the face of federal dithering. This is the move that drew bipartisan plaudits after Hurricane Sandy ravaged the Jersey shore in 2012, and one Christie may hope will propel a possible presidential candidacy in 2016. The play has worked swimmingly when run against teachers’ unions, or bungling bureaucrats, or “idiots” loitering on a stretch of beach in the face of an oncoming storm.

It doesn’t wear as well when the target is a nurse who risked her life to fight a deadly disease. 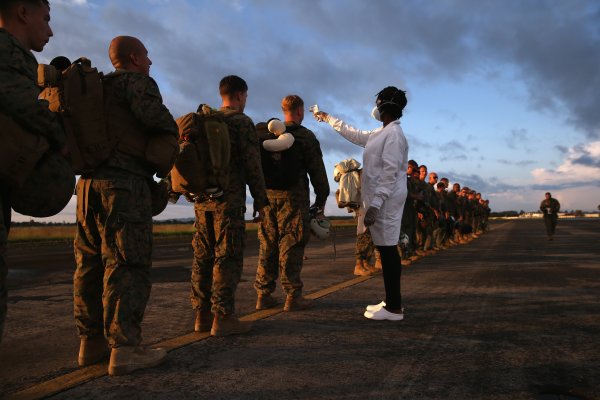 U.S. Troops Isolated for Ebola
Next Up: Editor's Pick