The lava flow from the Kilauea Volcano is seen crossing Apa'a Street/Cemetery Road in this U.S. Geological Survey (USGS) image taken near the village of Pahoa, Hawaii Oct. 25, 2014.
USGS/Reuters
By NBC News

An active lava flow on Hawaii’s Big Island gained speed as it spread toward a residential neighborhood late Sunday, prompting authorities to warn that evacuations could begin within hours. Civil Defense personnel and emergency response teams were starting a door-to-door sweep of homes near the village of Pahoa, officials said, to inform residents of the progress of the molten rock. Others were warned to stay indoors to avoid smoke.

The lava — at a temperature of around 2,000 degrees — Fahrenheit oozed across a road Sunday and pushed through a mostly Buddhist cemetery on the edge the town in the… 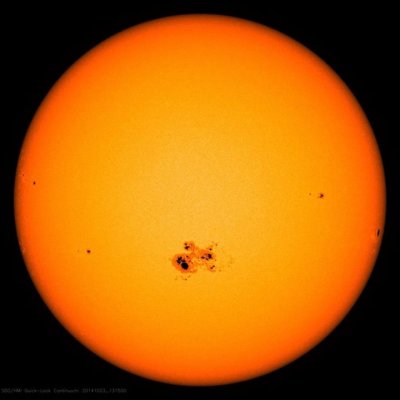 The Largest Sunspot in Decades Is Spitting Solar Flares at Earth
Next Up: Editor's Pick