Indonesian President Joko Widodo, center, adjusts his cap next to Vice President Jusuf Kalla, front right, and surrounded by members of his new Cabinet at the presidential palace in Jakarta on Oct. 27, 2014
Adek Berry—AFP/Getty Images
By Yenni Kwok

Indonesia’s President Joko “Jokowi” Widodo — the first Indonesian from outside the military and political elite to hold the country’s top job — has unveiled the Cabinet that will help him run the world’s fourth most populous nation for the next five years.

However, while the new leader has touted himself as a harbinger of change, his Cabinet includes several figures that reflect compromise and the reality of political patronage, suggesting that the wunderkind of Indonesian politics may need to temper the expectations of voters.

On a positive note, he made his appointments in conjunction with the Corruption Eradication Commission (known by its Bahasa Indonesia initials of KPK) and the Financial Transaction Reports and Analysis Center (PPATK), the anti-money-laundering agency — a step forward in a nation beset by graft.

“I selected the ministers carefully and meticulously,” he said. “That’s important because this Cabinet will work for the next five years, and we want the chosen people to be clean figures, hence our consultations with the KPK and the PPATK.”

The antigraft commission rejected eight of the candidates submitted by Jokowi, forcing him to find last-minute replacements.

Besides technocrats and newcomers, the 34-strong lineup, which was sworn in Monday, includes clients of his party’s chairwoman Megawati Sukarnoputri and politicians from other coalition parties.

With Jokowi holding no leadership position in his own party (the Indonesian Democratic Party–Struggle, or PDI-P), and having to rely on coalition partners, appointments from within the political establishment are inevitable if disappointing to some.

Reducing costly fuel subsidies and lifting economic growth are among the monumental tasks awaiting the new President. His choice to appoint experienced technocrats, such as the Coordinating Minister for Economics Sofyan Djalil and Finance Minister Bambang Brodjonegoro, to key economic posts has won praise. He has also picked a technocrat and anticorruption activist, Sudirman Said, to lead the graft-ridden Energy Ministry.

Eight female ministers were appointed to the 34-strong Cabinet — a record number. For the first time in history, Indonesia has a female Foreign Minister, Retno Marsudi, who was ambassador to the Netherlands until recently. Indonesia also has a female Forestry and Environment Minister, Siti Nurbaya Bakar, a Nasdem Party politician. The appointments have been hailed by women’s activists, but political analyst Philips Vermonte, of the Center for Strategic and International Studies in Jakarta, said in a tweet, “This is quantity, not quality.”

The public and analysts are also less than impressed with the inclusion of Megawati loyalists in the Cabinet (two of whom are women): her daughter Puan Maharani; her former Trade Minister, Rini Soemarno; and her former army chief, retired general Ryamizard Ryacudu, who is known for his hard-line views on separatist conflicts and who was barred from traveling to the U.S. after his troops were implicated in killings of two American citizens in Papua in 2002.

Puan has been made Coordinating Minister of Human Development and Culture, a senior post, despite her having no experience in administration. Meanwhile, critics have long rejected Rini, the new State-Owned Enterprises Minister, on account of her alleged implication in several scandals, including the Bank of Indonesia Liquidity Assistance (BLBI) case, and a furor over the purchase of Sukhoi fighter jets.

The BLBI scandal revolves around the fate of $71 billion of Bank Indonesia bailout funds given to banks affected by the 1997–98 financial crisis; misuse of the funds led to huge state losses that threatened to bankrupt the central bank. The KPK questioned Rini as a witness last year because it was believed she knew about the so-called “release and discharge” documents that were given to some debtors even though they didn’t fulfill their obligations. In the Sukhoi scandal, she allegedly ordered the State Logistics Agency chief to make a $193 million deal to purchase from Russia four Sukhoi jets and two Mi-35 helicopters, which was outside his jurisdiction, and without involving parliament.

“Jokowi is spreading the patronage around among his coalition,” says Aaron Connelly, Indonesia analyst and research fellow of the East Asia program at the Lowy Institute for International Policy in Sydney.

Megawati isn’t the only political figure to have foisted her people on Jokowi. An acolyte of Vice President Jusuf Kalla’s, from his hometown in South Sulawesi, was given the agriculture portfolio.

Some foresee difficulties ahead. Indonesia’s diplomats and defense officials have not traditionally seen eye to eye. With Megawati’s military man Ryamizard as Defense Minister, and Jokowi’s choice of a career diplomat like Retno (who is said not to be very familiar with the military) as Foreign Minister, Connelly says the antipathy will continue and two ministries are likely to “struggle to get on the same page.” 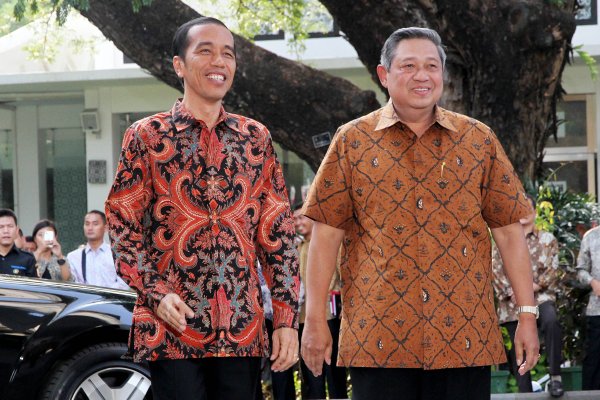