Girls Who Escaped Boko Haram Tell of Horrors in Captivity

Women and girls kidnapped by the Nigerian Islamist group Boko Haram are raped and forced to marry fighters even if they are underage, according to testimonies from women who have escaped the group.

In its latest report, “Those Terrible Weeks in the Camp: Boko Haram Violence Against Women and Girls in Northeast Nigeria,” New York-based Human Rights Watch estimates that the militant group has abducted about 500 women and girls from Northern Nigeria since 2009. Earlier this year Boko Haram kidnapped 276 girls from a secondary school in the town of Chibok in the northeast of the country. The mass abduction drew international outrage and sparked a viral social media campaign fuelled by the hashtag #bringbackourgirls. Human Rights Watch spoke to 12 of the 57 of the girls who have escaped; 219 are still missing.

Human Rights Watch explains that Boko Haram leader Abubakar Shekau has taken responsibility for abducting women and girls, and has justified the kidnappings as retaliation for the detention of Boko Haram family members held by the Nigerian government. In a 2012 video, Shekau says: “Since you are now holding our women, just wait and see what will happen to your own women … to your own wives according to Sharia law.”

But there’s also another motive for the kidnappings: punishing women who seek education. One victim who was kidnapped while traveling home from school in Konduga said that when the militants found out that she and her friends were students they said, “Aha! These are the people we are looking for. So you are the ones with strong heads who insist on attending school when we have said ‘boko’ is ‘haram.’ We will kill you here today.” Boko Haram’s name roughly translates to “Western education is a sin.”

The report confirms some of the worst fears about Boko Haram’s treatment of the girls they capture, specifically when it comes to sexual violence. According to interviews with survivors, most of the sexual violence and rape occurs within the context of forced marriages, although there are exceptions.

According to the interviews in the report, Boko Haram does not consider any girls too young for marriage. After one 17-year old prisoner complained that she was not yet old enough to marry a Boko Haram commander pointed to his 5-year-old daughter and said, “If she got married last year, and is just waiting till puberty for its consummation, how can you at your age be too young to marry?”

One woman who was raped in 2013 in a Boko Haram camp told Human Rights Watch that other women (specifically wives of Boko Haram leaders) were often complicit in sexual abuse of female prisoners. “I was lying down in the cave pretending to be ill because I did not want the marriage,” the woman told the researchers. “When the insurgent who had paid my dowry came in to force himself on me, the commander’s wife blocked the cave entrance and watched as the man raped me.”

Another girl was only 15 when she was forcibly married off to a Boko Haram commander after her abduction in 2013. “After we were declared married I was ordered to live in his cave but I always managed to avoid him,” the girl told Human Rights Watch. “He soon began to threaten me with a knife to have sex with him, and when I still refused he brought out his gun, warning that he would kill me if I shouted. Then he began to rape me every night. He was a huge man in his mid-30s and I had never had sex before. It was very painful and I cried bitterly because I was bleeding afterwards.”

The report cites numerous other reports of women being sexually assaulted by Boko Haram militants; some were raped within context of a forced marriage, others for being Christian, another was attacked for a perceived slight against the militants. The report acknowledges, however, that the group’s leaders did make some effort to protect kidnapped girls from random sexual abuses outside the context of “marriage.”

Human Rights Watch notes that rapes by Boko Haram are severely under-reported, largely due to the stigma around sexual abuse and the loss of virginity that sometimes occurs during the rapes in the conservative northeastern part of the country.

The report also delves into some of the specifics of the kidnapping of the Chibok schoolgirls, thanks to testimony from 12 girls who escaped. The escaped girls said that Boko Haram did not discriminate based on religion when they abducted the schoolgirls, and took both Christian and Muslim girls. They said that they believe the militants were originally after the school’s brick-making machine, and only decided to kidnap the girls once they realized they were unguarded — the principal, teachers, administrators were not on campus, and the only guard, an elderly man, had fled. One girl described the night Boko Haram arrived: “Two men told us we should not worry, we should not run. They said they had come to save us from what is happening inside the town, that they are policemen. We did not know that they were from Boko Haram. The rest of the men came and started shouting ‘Allahu Akbar’ and at that moment we realized, they were Boko Haram. We were told to be quiet. One of them told us that the horrible things we heard happening elsewhere, like burning houses, killing people, killing students, kidnapping people, would happen to us now. We all started crying and he told us to shut up.”

Another woman at the camps told Human Rights Watch she saw some of the Chibok schoolgirls forced to work for other women who were selected for “special treatment because of their beauty.”

The report also specifies that of all the girls who have escaped from Boko Haram interviewed by Human Rights Watch, only the Chibok schoolgirls have received any kind of state-sponsored medical aid or counseling. But one Chibok schoolgirl says the aid they received was more like a religious sermon, which is not what she needs.

“I just want someone who will listen to me and help me to stop the fear that takes over my mind when I think of my sisters (school mates) who are still with Boko Haram,” the girl told Human Rights Watch. “I am so afraid for them. Why can’t the government bring them back?” 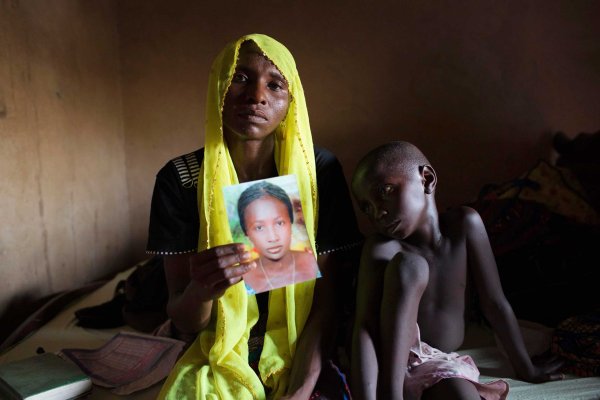 Boko Haram Kidnaps 30 Children in Nigeria
Next Up: Editor's Pick