At heart, Sunset Overdrive is a nerd-power fantasy that wants you to know it knows it’s a nerd-power fantasy. But it’s also about pulling the Xbox One out of the Bermuda Triangle. Sony’s PlayStation 4 has sold so well that even Sony’s baffled, whereas Microsoft clammed up about Xbox One sales back in April. Microsoft’s implied system sales have been solid, but the console needs a holiday dunk shot beyond recycled Halo. Now it definitely has one in Insomniac Games’ magnificent Sunset Overdrive.

Most probably know Insomniac for the Ratchet & Clank platform hoppers, where a bipedal cat and robot sidekick gallivant around the universe. You can see the lines back to those games here — the colorful environments, ridiculous weaponry and general daffiness — but Sunset Overdrive is a lot more than just Ratchet & Clank for grownups.

In the game you play a nerd who can grind — who cares how or why — on nearly anything, Cirque du Soleiling around a zany postapocalyptic metropolis, pulping exploding mutants and ruthless robots, egged on by gorgeous scenery and goofball factions and a punk backbeat. Imagine Tony Hawk meets Sam Raimi crossed with Sid Vicious multiplied by pinball.

The plot’s intentionally daft enough to slide almost beneath notice: a corporate soda maker’s new energy drink turns imbibers into mutants, because, to paraphrase one of the characters you interact with, “Y’know, science and somethin’-somethin’ bullsh–.” It’s just a permission slip to build a city that’s effectively a giant fun-park ride.

Nothing has to make sense, which is how the game then goes about making perfect sense. Sandbox games let you go anywhere, but eventually amount to doing this thing to get that thing to level up and do the next thing. But what you’re thinking during the cutscene exposition and wordy banter is “What’s my next upgrade?” or “How do I collect this many of that?” or “How’s my next opponent going to fight?” or “What’s that part of the map going to play like?”

It’s as if Sunset Overdrive reads minds, because it cannonballs you from thrill to thrill, burning all the exposition and busywork to the ground and using what little there is to slyly poke fun at genre conventions. “Bryllcream, what kind of a name is that?” says the protagonist at one point after hearing another character’s goofy handle. “One that’s easy to remember, I guess,” goes the response. It’s a moment that stands for everything else about the game: subtext schmubtext, just go with the flow.

And boy does this thing flow. Never in a game world this big and geometrically complex have I felt as firmly connected to the skyline and simultaneously able to power through it, chaining leaps, air dashes, swings, flips, attacks, wall runs, zip-line “undergrinds,” trampoline bounces and ground pounds while skating across anything with an edge. Sunset City — that’s its name, though most of the game transpires under blue skies — has been scrupulously overlaid with railways and cables and packed with elaborate angular structures so you can grind from one side of the city to any other without touching down. This, finally, is the aerial skating game Sucker Punch’s Infamous only teased five years ago.

Staying off the ground is essential. On the ground you’re slow and clumsy, but in the air you’re some kind of grind-fu god, working a style meter that requires continuously deft finger work into an acrobatic lather by mixing maneuvers and weapon attacks — a familiar idea that’s been scaled way up here. Basically, think of the ground in Sunset Overdrive as kryptonite.

Then think about how ridiculous you’d want your nonsense arsenal of destruction to be, and Sunset Overdrive manages to go one better. So, for instance, you can wield: a rifle that flings vinyl records that bounce from enemy to enemy, an explosive teddy-bear launcher, a crowd-control gun that deploys taunting holographic decoys, a pistol that spits projectiles that turn into floating turrets, and a weapon (dubbed “The Dude”) that lobs incendiary bowling balls.

Nonsensical, but not superficial. The pyrotechnics feel purposeful, and each weapon deploys unique damage against the game’s four basic enemy types — you’ll die, and die again, then die some more if you opt to fight robots with shotguns or human thugs with harpoon launchers, for instance (though dying itself is delightful and a clever in-joke here — a collage of cultural sendups playing with the idea that these kinds of games are basically immortality simulators).

All of that’s fed by a backend system of configurable power-ups you unlock by feats of derring-do as the game unfolds. You can finesse these in all kinds of cool ways, from monkeying with weapon damage to how fast the style meter climbs to the sort of ballistic damage you want to kick out (shockwaves, tesla bolts, tornadoes and more) as you jump style levels. It’s an elegant relational lattice that feels balanced and very you-centric, where the permutations from your choices amount to meaningfully different ways of squaring off with opponents or completing challenges.

My only complaints are a few niggling completeness problems Insomniac needs to fix: I encountered a few missions that wouldn’t advance without resets, a few spots where enemies weirdly stopped being able to damage me, half a dozen places where I got stuck in the world geometry and had to reset the game, and I don’t know if it was code shenanigans or the Xbox One, but the game crashed outright twice.

I suppose I should say something about the next-gen stuff, the crazy number of enemies the game can shoehorn into battles at once, the crazy-big bosses and ambitiously multilayered missions and combat scenarios, the magnificent architectural and kaleidoscopic sweep of Sunset City itself. But at this point I don’t really notice that stuff. And that’s the biggest compliment I can pay the game, really — that it’s great without bothering to highlight the chrome.

Insomniac calls Sunset Overdrive a “traversal shooter,” as if that explains anything. I’d just call it a damned good time. 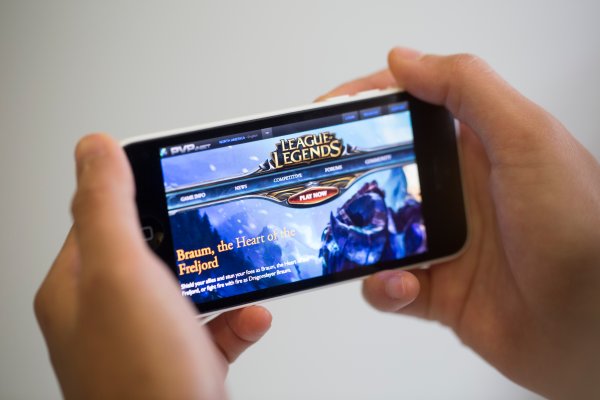 5 iPhone Games You Can't Miss This Week
Next Up: Editor's Pick