A cat lounges at Cat Town Cafe, the nation's first permanent cat cafe, during the grand opening on Oct. 25, 2014 in Oakland, Calif.
Katy Steinmetz for TIME
By Katy Steinmetz

Dozens of Oakland residents queued up Saturday to get their paws on cats and drip coffee. The founders of Cat Town Cafe, a hybrid drinkery and “cat zone,” held a grand opening for the nation’s first permanent cat cafe—a furry fantasy others have tried to realize, only to be derailed by funding problems and pesky health codes.

“The cat cafe, to us, is fun schtick on top of a serious rescue operation,” said Adam “Catman” Myatt, a photographer who co-founded Cat Town with Ann Dunn. Disheartened by the cramped, scarring conditions at local animal services, Dunn started a nonprofit foster program to help whiskery creatures find homes in 2010. That operation, Cat Town, became the springboard for the spot in downtown Oakland where customers frolicked with adoptable felines while munching bagels on this historic October 25.

“This is kind of my dream vision of what Cat Town would be like,” said Julie Sammons, an employee at the nearby University of California-Berkeley, as she stroked one cat in her lap and another sprawled preciously on a burlap cat bed beside her.

Julie Sammons lives out her dreams at Cat Town Cafe on Oct. 25, 2014 in Oakland, Calif.
Katy Steinmetz for TIME

Some locals came out of curiosity, others a devout appreciation of little purr-boxes. Many admired the mission behind the venture and just as many lauded the decor, murals and elaborate cat houses that placed the cafe firmly in the Bay Area. Two graffiti artists, known as Derp and T, painted one wall with images of boats in front of the Bay Bridge, and cats wove through miniature reproductions of the historic Tribune Tower and twin federal towers that make up Oakland’s skyline.

A cat walks atop a reproduction of Oakland's Tribune Tower at the Cat Town Cafe in Oakland on Oct. 25, 2014.
Katy Steinmetz for TIME

“This is much nicer than I expected,” said Ellen Breeden, who teaches special education in Oakland, “not as creepy as the ones in Japan I’ve seen on the Internet.” When asked what brought her out for opening day, Breeden had a simple response: “I love cats.” Others were slightly more specific in their praise of the animals. “They’re soft and furry,” said Marilyn Standley, a bookkeeper for a theater company. “And they cover their poop.”

To keep the building up to code, the cat zone and cafe had to be separated by a corridor with closed doors on either end. The ventilation system was built so that air only comes from the cafe into the cat zone, and not vice versa. Employees who work in the cafe and those working in the cat zone cannot mix, and Cat Town Cafe even has separate bathrooms—for those who have, and have not, entered the zone o’cats. Dunn says getting through the red tape wasn’t that hard, and neither was getting funding. After she and Myatt hit on the idea in December last year, they quickly raised funds through donations and a successful Kickstarter campaign.

A corridor separates the cafe portion of Cat Town Cafe from the cat-zone area, on Oct. 25, 2014.
Katy Steinmetz for TIME

By Saturday afternoon, animals were already flying out of the cat zone into loving homes. And some visitors who had come with no intention of adopting a cat were starting to have ideas, even despite lovers’ allergies. Though no live camera for the cat zone had been set up by the grand opening, employees said that they were considering giving the world a view of Cat Town Cafe. Many homeless cats, Dunn says, just need to be in a comfortable environment so that potential adopters can see them thriving, rather than huddled in a corner of a metal box. “He literally grew up in a cage,” Dunn said, pointing to a playful tabby named Cooper who found new owners off the bat. “Though you’d never know it.”

This is Cooper, a cat who got adopted at the Cat Town Cafe in Oakland, Calif.
Katy Steinmetz for TIME
More Must-Read Stories From TIME 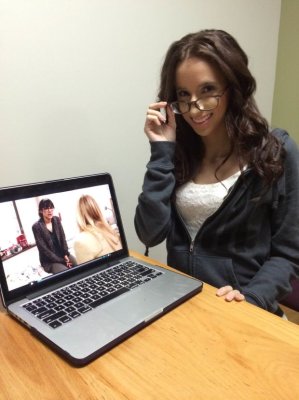 'Law & Order: SVU' Ripped an Episode From My Headline
Next Up: Editor's Pick