A nurse who worked with Ebola patients in West Africa has tested negative for the virus after she was quarantined Friday upon arriving in Newark, New Jersey under a controversial new order by the governors of that state and New York.

Kaci Hickox had no symptoms when she landed, but developed a fever while quarantined at Newark International Airport, reports the New York Times. She will undergo additional tests to confirm that she is in fact cleared of Ebola.

Under a new policy announced late Friday afternoon by Gov. Andrew Cuomo of New York and Gov. Chris Christie of New Jersey, anyone who had direct contact with Ebola patients in Guinea, Liberia and Sierra Leone and enters the country through Newark Liberty and Kennedy International Airport must be quarantined for 21 days.

“We are no longer relying on [Centers of Disease Control and Prevention] standards,” said Gov. Christie.

Health experts say that the travel bans on flights from West Africa proposed by several Republicans in Congress, as well as the new mandatory quarantines in New York and New Jersey, are likely to discourage badly needed healthcare workers from traveling to the area to help contain Ebola.

“There is a notable lack of clarity about the new guidelines announced yesterday by the state authorities in New York and New Jersey,” Sophie Delaunay, executive director of Medecins Sans Frontieres (MSF), for whom Hickox had been working, in a statement following Hickox’s quarantine. “we are attempting to clarify the details of the protocols with each state’s departments of health to gain a full understanding of their requirements and implications.”

Dr. Rick Sacra, who contracted Ebola in Liberia and was flown back to the United States, told the Times the mandatory quarantines “will effectively double the burden on those people, on the loss of productive time.”

Hickox herself said in a first person account published by the Dallas Morning News that her Newark Airport experience was bewildering and frightening. During six hours at the airport she was given only a granola bar and was questioned by a series of people, some of whom did not identify themselves, she said.

“I am scared about how health care workers will be treated at airports when they declare that they have been fighting Ebola in West Africa,” said Hickox. “I am scared that, like me, they will arrive and see a frenzy of disorganization, fear and, most frightening, quarantine.”

According to MSF, Hickox is now at Newark University Hospital, in a tent serving as an isolation ward. The tent is not heated and Hickox is clothed only in paper scrubs.

Hickox’s mother told the Times that Hickox was discouraged by her return from West Africa.

“She’s lived in Burma, Sudan, Uganda and Nigeria, and she’s worked for Doctors Without Borders many times,” Hickox’s mother said. “I think the frustration is that she went and did her good deed and her passion and her serving spirit, and she comes back to America and I just don’t feel they were very welcoming.”

The mandatory quarantines were implemented after Dr. Craig Spencer contracted Ebola in Guinea and was hospitalized Thursday after showing symptoms of the virus. 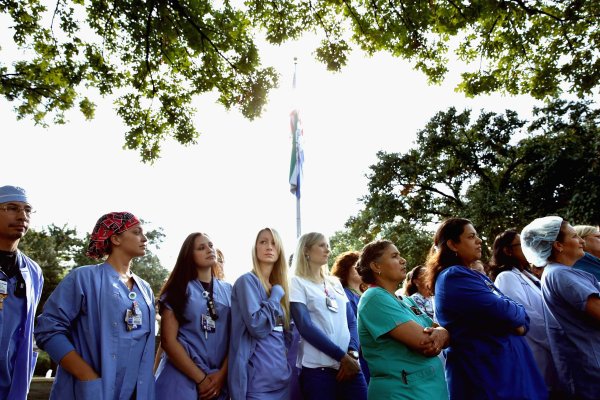 Dallas Nurses Describe Comforting Ebola Patient As He Died
Next Up: Editor's Pick