Several dozen nurses from Texas Health Presbyterian Hospital gathered in front of the hospital to show support for their employer, Oct. 20, 2014 in Dallas.
Chip Somodevilla—Getty Images
By Sam Frizell

Thomas Eric Duncan, the Liberian national who unknowingly traveled to the United States carrying Ebola, died of the virus ten days after he was admitted to Texas Presbyterian Hospital. In the intervening period, Duncan was cared for by nurses who risked their lives to save him.

In interviews that will be aired Sunday on CBS’s 60 Minutes, the nurses describe for the first time trying to treat Duncan before his death. They recall holding the dying man’s hand as Duncan’s own family was not permitted in the room for fear of contracting the disease.

“I was very frightened,” says intensive care nurse Sidia Rose, according to transcripts of the interview. “I was. But — and I just dried my tears, rolled down my sleeves, so to speak, and — went on about my night.”

John Mulligan treated Duncan in his final hours of intensive care. “By the time he had — I saw him on October 1st — his — his nausea and vomiting had pretty much subsided. That aspect of it was over. He had a rectal tube in place so he didn’t — he was — had gotten so weak, he couldn’t get up to the commodes anymore. So that was to help contain all of his very infectious body fluids that we were dealing with,” Mulligan recalls.

“On the first day he didn’t say much. He — he was — you could look in his eyes and tell he just didn’t feel good,” Mulligan continues. “And we offered him words of encouragement. We let him know that we’re here, whatever you need — let us know and we’ll get it. And we held his hand and talked to him and comforted him because his family couldn’t be there. I mean, you can’t take that risk with this type of disease of exposing, you know, loved ones, as much as you want them there. It’s just not a possibility.”

Duncan died on October 8. Two nurses contracted the disease from their contact with Duncan, but at least one has since recovered. 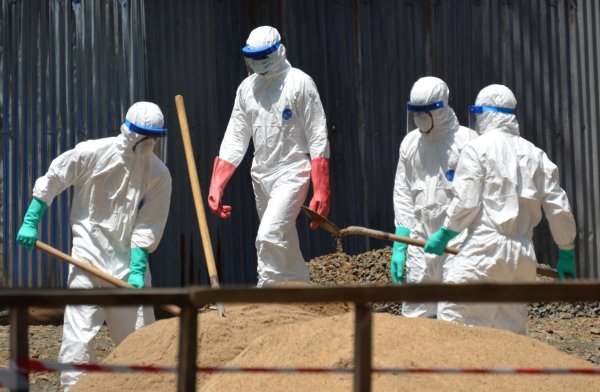