Spoilers for the series finale of Boardwalk Empire below:

In the end, Boardwalk Empire went out exactly the way you would expect a gangster story to: with a Tommy gun.

Yes, it turned out that the young, ambitious drifter that Nucky met earlier this season was in fact Tommy Darmody, returned to Atlantic City to get revenge for lives ended and ruined, and in the process–we have to assume, seeing him dragged away in Nucky’s fading vision–throwing away his own.

The reveal may not have surprised detail-oriented fans, who been calling Tommy’s identity in Internet comments from his first appearance as “Joe Harper from Indiana” earlier this season. But it was a thematically dead-on ending for a series that has, beginning to end, told stories about the old preying on the young–Nucky killing Jimmy, the Commodore raping Gillian–abuse and sickness passing through the generations like a family heirloom. In the process, Tommy brought Boardwalk Empire‘s tragic circle to a close–its acts of violence, greed and abuse building on one another until they ended in a pile of corpses and torn-up dollar bills.

Tommy pulled the trigger. But there was another young man haunting this episode, haunting the entire series, shadowing Nucky’s present and his past, who may have done Nucky in as surely as Tommy did. His name: Ragged Dick.

We never saw him in Boardwalk Empire, of course, because he only existed in books. He was the hero of a series of didactic stories by Horatio Alger, about a shoeshine boy who goes from literal rags to riches through hard work and clean living. He wasn’t just a character but a symbol of the culture Nucky grew up in, a time of megafortunes and few safety nets, when poor children were smugly told they could bootstrap themselves into middle-class fortune.

Even at the time, Alger’s stories were controversial; they were mocked by social critics and parodied by satirists. But they were powerful, and they stuck, in ragged Nucky’s mind above all. In the first season, Nucky compares young, hungry Jimmy to Ragged Dick; in a flashback earlier this season, an older man does the same to young Nucky. In season three, Gyp Rosetti finds the book while poking around Nucky’s office; last season, Nucky gives a copy to nephew Will (another surrogate-son figure). And the spirit of Alger’s Ragged Dick runs through the series other references to the sanctimonious fables kids were raised on in Nucky’s day, like the children’s magazine, Golden Days for Boys and Girls, in the final season premiere:

Be honest and true, boys!
Whatever you do, boys,
Let this be your motto through life.
Both now and forever,
Be this your endeavor,
When wrong with the right is at strife.

If Boardwalk Empire has had a consistent theme, it’s been to systematically, repeatedly undermine this righteous, golden lie. In Nucky’s world, being honest and true may not always get you killed, but it doesn’t get you glory. The folks standing tallest at the end of the series–the real-life characters who would get written into history–are the violent, like Luciano and Lansky, or the conniving, like Joe Kennedy. From the beginning of this season’s flashbacks, the Commodore made clear that he thought Nucky’s Alger-driven morality was not just wrong, but despicable: “You think you deserve something for trying hard,” he tells him, contemptuously, like it’s the worst human insult imaginable.

As we have all season, we know where this flashback is going to lead: with Nucky procuring Gillian into “service” to his pederast mentor. His own dad a miserable drunk, Nucky has two fathers, Horatio Alger and the Commodore, and they don’t like each other. He wants to be the Honest and True Boy, but the only way not to disappear is to become the Commodore’s boy.

He makes his choice, and spends the rest of his life trying to reconcile the two. Which is where we met him at the beginning of the series–trying to be corrupt but not brutishly criminal, to be a bootlegger but work like a legitimate businessman. He would eventually kill and get bloodied, but his preferred weapon was his Magic Bankroll, which he would produce to peel off bills and make problems go away. In “Eldorado,” at last, the magic fails him; Tommy tears up Nucky’s second payoff in his face. “You showed me,” Nucky says.

Not yet. But he’s about to.

Boardwalk Empire‘s ending was all about finality. It spread its major deaths across the final three episodes, but with a few exceptions–Margaret, the institutionalized Gillian–if you had made your predictions on the principle that any non-historical figure would leave feet-first, you would not have done too badly. Like HBO’s Rome, this was a docufiction hybrid, with an emphasis on the little people and also-rans who would turn out to be history’s redshirts. Its greatest stories were at the margins–Richard Harrow’s, Chalky White’s–and whenever possible, it wrote out their epitaphs on the wall in bullet holes.

That was Boardwalk Empire‘s philosophy from the beginning. Producer Terence Winter was a writer for The Sopranos, but he notably did not agree with creator David Chase about closure and unanswered questions. It was Winter who lobbied Chase, unsuccessfully, to tell the audience what happened to the Russian from the “Pine Barrens” episode. And Winter had pointedly said that he was not going to end Boardwalk with a finale like The Sopranos‘ cut to black.

And boy, did he ever not give us a Sopranos ending here. Is Tony Soprano dead? You and I will be before anyone stops arguing that question. But is Nucky Thompson dead? Yes! BLAMMO! He is totally, 100%, no-ambiguity, direct-shot-to-the-head, glazed-over-eyes, fading-vision, last-fleeting-memory-of-childhood dead! He has shuffled off this mortal coil and joined the choir invisible, he is an ex-Nucky! (He is also, by the way, less fortunate than his real-life inspiration, Nucky Johnson, who lived until 1968.)

But it was not only Nucky whom “Eldorado” gave closure; for most of the hour, the episode was a closure machine, a series of long goodbyes and exit scenes designed to give the audience the sense that each story was well and thoroughly finished. Narcisse, having put down Chalky White in the season’s most powerful episode, is gunned down (again, bullet to the head to silence doubters). Capone gets ready for jail, saying goodbye to his deaf son in a scene that recalled how affecting Stephen Graham could be when not he was not made to play Capone as a cackling maniac. Nucky has a last dance with Margaret. Luciano toasts his victory with the Five Families. You may have wanted a different ending, but you can’t say that you did not definitively get one.

I’m not saying that Boardwalk Empire was the anti-Sopranos, exactly, or that it was built for people who hated The Sopranos‘ ending. I’m sure there are people who loved both. But it was at least a kind of counterrevolution against The Sopranos‘ narrative style. David Chase’s story took expectations of the mob story and upended them, made them caustically ironic. Winter took a gangster story, largely from life, and had it do what you expect gangster stories to do, right down to ending with a whacking. It did it beautifully, with tremendous attention to detail, great performances and an acute sense of the history and ideas of the time. But on a channel that’s made an art of rethinking the mob story, the Western, the fantasy saga, Boardwalk Empire was, unapologetically, the thing that it was.

In the end, I prefer The Sopranos, up to and especially the ending. But that’s subjective, and it’s not really fair to hold that against Boardwalk Empire. It was itself to the end, and it ended pretty well by its own standards. The flashback structure of the season may have been, as Andy Greenwald wrote in Grantland, an attempt to retcon empathy into Nucky’s story–but it did show how he carried his downfall in him from the beginning.

A David Chase might have picked a different final moment, maybe that weird, magical scene on the boardwalk where a Buck Rogers showgirl guides Nucky behind a curtain to see the Metropolis-like image of an early television, and he’s struck dumb at the vision of a future he has no part in. I loved that image; it’s the one that will probably stick with me. But that wouldn’t be Boardwalk Empire. And the final image it did choose was gorgeous: Nucky as a boy, in his own golden days, reaching out for a coin that he thinks means hope but eventually will mean his doom.

Because “Eldorado” is not just the apartment building where Nucky dances with Margaret. It’s Nucky himself–the phrase literally means “the golden one.” Striving for a shiny nugget–a drive echoed in “The Spell of the Yukon,” the Robert Service poem Nucky hears the drunk Princeton boys reciting–is a fitting note to end this series on. Like young Nucky, flailing and grasping under the ocean waters, Boardwalk Empire went for the shiny gold. It didn’t know how to do otherwise.

Read next: Meet The Real Gangs of Boardwalk Empire 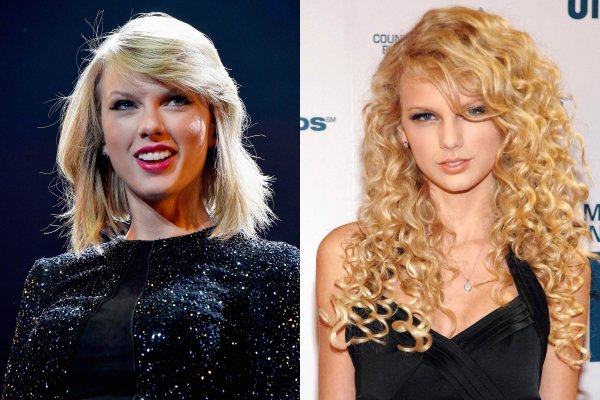 See Taylor Swift Over the Years
Next Up: Editor's Pick