The Largest Sunspot in Decades Is Spitting Solar Flares at Earth

The sun’s largest sunspot region in more than 20 years is facing Earth, sending solar flares our way and threatening a coronal mass ejection (CME), which can cause auroras and significant disruptions to our power grids.

Sunspots are relatively cooler regions of the sun visible on the surface, with complex magnetic field activity. The sunspot region AR12192 is the “largest sunspot group since November of 1990,” according to Doug Biesecker, a researcher at the National Weather Service Space Weather Prediction Center. AR12192 is roughly the size of the planet Jupiter, but the largest sunspot on record, seen in 1947, was three times that size.

AR2192 has been sending out high-energy solar flares but thus far no CME, which, Biesecker says, tend to be more closely associated with the magnetic complexity of a sunspot region than with a region’s size. A smaller solar storm around Halloween back in 2003, for example, created auroras visible as far south as Florida. With the high level of flare activity at present, scientists expect that if AR12192 releases CMEs directly toward Earth it will do so in the next three to four days, The Washington Post reports.

Read next: Watch Highlights From This Week’s Solar Eclipse 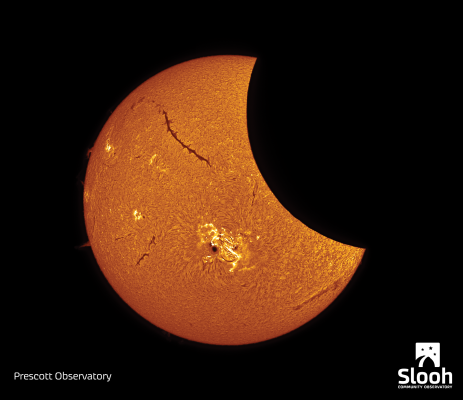 Watch Highlights From This Week's Solar Eclipse
Next Up: Editor's Pick