Hong Kong's Protesters Feel Betrayed by Their Own Government

A pro-democracy protester displays his T-shirt on a street in Mongkok district on October 22, 2014 in Hong Kong.
Kong Ng—Getty Images
By Elizabeth Barber / Hong Kong

Hong Kong and China are “one country” with “two systems.” Yet these days, pro-democracy protesters say, the emphasis is patently on “one country.”

Just shy of one month into the protests paralyzing key traffic arteries in Hong Kong, democracy supporters here are outraged over what they say is the local government’s failure to meet even low expectations for interceding on their behalf to Beijing.

“But it has done the reverse,” she says, “by urging Hong Kong people to accept the unacceptable.”

Indeed, supporters of the protests point to concrete steps Hong Kong’s top leader, Chief Executive Leung Chun-ying, could take — but hasn’t — to get Beijing to end the deadlock. That Leung hasn’t approached Beijing for reforms, but has instead encouraged protesters to back down, illustrates to demonstrators one of the chief reasons for their ongoing sit-ins: if Beijing gets to vet candidates for Hong Kong’s top leader, as it plans to do in 2017, this city is bound to get another local government unwilling to defend “two systems.”

“We are supposed to have autonomy,” said 30-year-old civil servant Cheong Kung on Thursday night, as he leaned back on his hands in the main protest area of Harcourt Road (recently dubbed Umbrella Square by protesters after the movement’s symbol). “Supposed to have it,” he added with wry emphasis. “Supposed.”

“This is why we are here,” said his friend Yai Pon, 30, a travel writer. “If we don’t get universal suffrage, we will never really have autonomy.”

Hong Kong’s mini-constitution, called the Basic Law, promises the territory “a high degree of autonomy” from China, to which it was returned in 1997 after 156 years of British rule. But protesters say the Hong Kong government has let Beijing chisel at that autonomy for years — most recently by not challenging the Aug. 31 decision by the Standing Committee of the National People’s Congress (NPC), in Beijing, on electoral reforms in Hong Kong.

The NPC’s decision says Beijing will sieve candidates for Hong Kong’s top leader through a 1,200-member committee widely seen as stacked with Beijing loyalists. To get on the ballot, candidates must win at least half the committee’s votes. Protesters see this process as a violation of the Basic Law’s promise that Hong Kong people can elect the chief executive by “universal suffrage upon nomination by a broadly representative nominating committee in accordance with democratic procedures.” They say it is undemocratic to put someone in Hong Kong’s top seat who, by virtue of the manner in which they were elected, has already let the whittling of local autonomy to continue.

“The concept of autonomy assumes that is in in the interest of the autonomous government is to defend its autonomy,” says Michael Davis, a law professor at the University of Hong Kong.

“But there is a feeling that what we have in Hong Kong is a government that represents Beijing’s interests and is delinquent in representing Hong Kong’s interests to Beijing,” says Davis. “I think that’s at the heart of all this.”

Since Sept. 28, protesters, who on at least one night numbered 10,000, have stood, sat and slept in the streets to lobby Beijing to revisit the Aug. 31 decision. In recent days, Umbrella Square has acquired a sense of semi-permanence, turning into a village of tents arranged in tidy rows under the perennial neon twinkle of the city’s skyscrapers.

Not everyone in Hong Kong agrees with the protests. Many residents are anguished over the disruption the protests are presenting to local commerce, especially retailers in the protest areas, and to taxi and truck drivers affected by the traffic diversions and gridlocks the sit-ins have wrought. A sizable portion of the population — mostly working class and elderly — is also pro-Beijing and view the democracy movement as a threat to their livelihoods.

Yet the most recent public-opinion poll from the Chinese University of Hong Kong shows that support for the protests for the first time exceeds opposition to them. The results of the poll, conducted between Oct. 8 and 15, indicate that 37.8% of respondents support what’s been dubbed the Umbrella Movement, while 35.5% oppose it.

In September, before the protests kicked off, 46.3% of public opposed activists’ plans to occupy the streets, and 31.3% said they favored such plans.

Protesters say that demonstrable support here for electoral reform obligates the Hong Kong government to communicate such support to Beijing and ask that the demands be addressed. They point in particular to a line in the Basic Law that says the election method “shall be specified in the light of the actual situation” in Hong Kong.

“The actual situation right now is very different than it was on Aug. 31,” says Surya Deva, a professor of law at the City University of Hong Kong. “The chief executive should submit a report to the NPC on the new situation. He should convey that there should be a pathway for a democratic candidate to stand for election.”

“There is no legal issue here,” says Deva. “The chief executive is legally allowed to ask the NPC to reconsider, and the NPC is constitutionally allowed to change, or even void, its decision.”

In a televised meeting between students and government officials this week, students urged the officials to “have courage” and bring protesters’ demands to Beijing.

The Hong Kong government “has the constitutional duty to fight for a democratic reform proposal for Hong Kong,” said Yvonne Leung, a delegate for the Hong Kong Student Federation.

Yet Carrie Lam, Hong Kong’s No. 2 official, said the government was prepared to send a new report just to the relatively lowly Hong Kong and Macau Affairs Office, not to the NPC. Students pressed Lam for an explanation of what could come of sending a report to the office, which was uninvolved in the Aug. 31 decision, but received no answer.

Neither the students nor the government has announced plans for a second round of talks. On Friday activists said they will poll protesters on the government’s offer to write to the council, while on Thursday the government said it would stage an exhibition on the Basic Law, so that “members of the public may also gain a better understanding” of it. The government has repeatedly insisted that the NPC decision is consistent with Hong Kong’s laws.

Hilary Lee, 20, a manager at a local school who was staffing a supplies station near the outskirts of the protests in Admiralty district on Thursday night, said she would be willing “to go step by step” toward a more democratic government, but did not see the government taking any steps.

“I’m waiting here until C.Y. Leung apologizes and until he does something that would make me feel like, O.K., change is coming,” she says, referring to Leung by his initials, as he is commonly known. “But the government is not doing anything.”

Mark Cheung, 28, a videographer who has lived in Umbrella Square for almost a month, said he is not optimistic that the government’s do-nothing zeitgeist will change: “The Hong Kong government has not fought for the right of Hong Kong people to have fair elections. And I’m pretty sure they’re not going to do anything different now.” 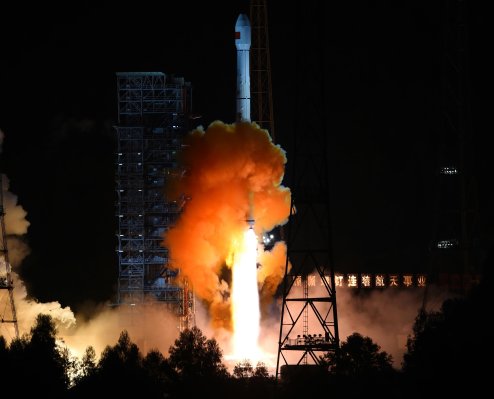