How Ready Is New York City for Ebola?

Doctors Without Borders physician Dr. Craig Spencer tested positive for Ebola on Thursday, Oct. 23, at Bellevue Hospital in New York City, immediately testing the strength of the city’s preparation for the deadly disease.

Given the mistakes made during the first case of diagnosed Ebola in the United States—Thomas Eric Duncan in Dallas—New York City has more fears to quell and also more to prove. Can it do better than Dallas?

Its leaders certainly think so.

New York City has been prepping and drilling its hospitals for the possibility of an Ebola patient since July 28, when it was confirmed that Americans Dr. Kent Brantly and Nancy Writebol had contracted Ebola in Liberia. “I wanted to know that our staff was able to handle [a possible Ebola patient],” says Dr. Marc Napp, senior vice president of medical affairs at Mount Sinai Health System.

“We’ve prepared for a variety of different things in the past: anthrax, H1N1, small pox, 9/11, Hurricane Sandy,” Kenneth Raske, president of the Greater New York Hospital Association (GNYHA) told TIME. “This preparation is not unusual.”

New York City is also one of the first cities to adopt a new system that designates one hospital within a region—Bellevue in this instance—to be the headquarters for Ebola care. If there’s a patient who is a risk, like Spencer, Bellevue will take the patient. Should a potential Ebola case walk into the emergency room of another hospital, those patients can be transferred to Bellevue.

This is not the first time New York officials have responded to a possible Ebola case. In early August, Mount Sinai announced it had a patient with a travel history and symptoms that were a red flag for Ebola. The emergency room isolated the patient and the hospital sent blood for tests to the Centers for Disease Control and Prevention (CDC)—tests that ultimately came back negative.

The city wasn’t as lucky with Spencer, who had been self-monitoring since returning from Liberia. Spencer notified Doctors Without Borders when he ran a temperature on Thursday morning. Staff from New York’s Bellevue hospital were soon at his doorstep in hazmat suits, ready to take him in for treatment to the hospital.

“We were hoping [this] wouldn’t happen but we were realistic,” New York Governor Andrew Cuomo said in a press conference at Bellevue Thursday night. “We can’t say this was an unexpected circumstance.”

Cuomo noted that New York City had the advantage of learning from Dallas’ experience and its mistakes. Texas Presbyterian Hospital failed to diagnose Duncan with Ebola right away, despite his Ebola-like symptoms and the fact he’d been in Liberia.

“The trigger went off again when the nurses got sick in Dallas,” says Mount Sinai’s Napp. New York officials worked closely with the CDC and local health departments as well as with JFK Airport to ensure procedures were in place for identifying people who may be at risk for Ebola at every point of entry to the country. On Oct. 21, the city hosted an Ebola education session that was run by area health experts, with members of the CDC who demonstrated the proper donning and doffing personal protective equipment (PPE). Over 5,000 health care workers and hospital staff members took part.

“As a result of the missteps in Dallas, there were a whole new series of protocols,” says Dr. Robert Glatter, an emergency medicine physician at Lenox Hill Hospital in New York City.

And New York City has the challenge of sheer size and density. New Yorkers live in very close quarters with one another. Thankfully, Ebola isn’t an airborne disease, so even though Spencer traveled Brooklyn to go bowling, since he wasn’t symptomatic, anyone he might have encountered is at very low risk of contracting the disease.

For now, New York City has just one patient, and it plans to get it right. Doing so might restore American confidence in the system—but failure would be devastating.

Read next: Can You Get Ebola From Subway Poles and Bowling Balls? 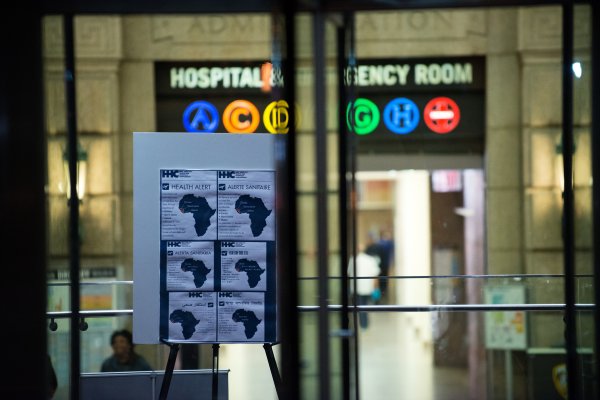 NYC Doctor With Ebola Described As a 'Dedicated Humanitarian'
Next Up: Editor's Pick