The entrance to Bellevue Hospital on Oct. 23, 2014 after a doctor who recently returned to New York from West Africa was rushed with a fever t o be tested for possible Ebola, the city's health department said.
Timothy A. Clary—AFP/Getty Images
By Alexandra Sifferlin

A health care worker who was rushed to New York City’s Bellevue Hospital Thursday has reportedly tested positive for Ebola.

Craig Spencer had recently returned to the United States from one of the three West African countries hardest hit by the Ebola outbreak. The New York Times reported Thursday night that the Centers for Disease Control will need to confirm the initial positive test.

Spencer was transported to Bellevue by a specially-trained team wearing personal protective equipment, after he reported experiencing fever and gastrointestinal symptoms. Given the health care worker’s recent travel history, the Centers for Disease Control and Prevention and the New York City Department of Health concluded that he should undergo Ebola testing. They also screened for more common illnesses like Malaria.

Disease detectives from the City’s Health Department have already started actively tracing the patient’s contacts as a precaution. They will notify and isolate anyone at potential risk of contracting Ebola. A White House official told TIME Obama has been briefed on the New York case multiple times Thursday.

New York City previously designated Bellevue Hospital to receive any Ebola patients that should enter the city. Bellevue has also been preparing to accept Ebola patients from other hospitals if need be. New York City hospitals in general have been preparing and drilling for the possibility of a patient with Ebola since August, most recently by holding an an Ebola education session for over 5,000 local health care workers on Tuesday.

This is the second time New York City has seen a potential case of Ebola. In the first case, a patient at Mount Sinai Hospital wound up testing negative for the virus.

–with additional reporting by Zeke Miller 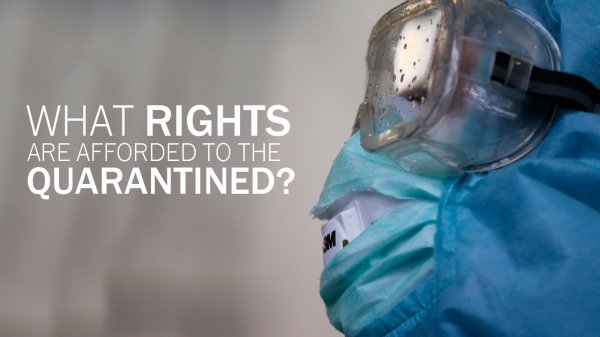 What Are the Rights of People Quarantined for Ebola?
Next Up: Editor's Pick