Facebook CEO and founder Mark Zuckerberg is a true pioneer in the realm of technology. Time has named him among the top 100 most influential people in the world, and his personal wealth is currently estimated at more than $34 billion. (A portion of that wealth, he just announced, will be dedicated to combating the Ebola virus.) Zuckerberg famously launched Facebook from his Harvard dorm room in February 2004. Today, the social network has, on average, over 800 million daily users, and was most recently valued at $200 billion, Time reports.

In honor of the wunderkind’s unprecedented success, here are 10 of his best quotes to inspire entrepreneurs in any industry. (We’ll admit, some of them are just as out-of-the-box as Zuckerberg himself.)

1. “In a world that’s changing really quickly, the only strategy that is guaranteed to fail is not taking risks.” —From an October 2011 interview at Y Combinator’s Startup School in Palo Alto, California.

2. “The question isn’t ‘What do we want to know about people?’ It’s, ‘What do people want to tell about themselves?” —From a November 2011 interview with Charlie Rose.

3. “I literally coded Facebook in my dorm room and launched it from my dorm room. I rented a server for $85 a month, and I funded it by putting an ad on the site, and we’ve funded ever since by putting ads on the site.” —In the same Charlie Rose interview, Zuckberg spoke about the social media giant’s humble beginnings.

4. “A squirrel dying in your front yard may be more relevant to your interests right now than people dying in Africa.” —From a speech given to his colleagues at Facebook about relevance, as reported by The New York Times.

5. “Move fast and break things. Unless you are breaking stuff, you are not moving fast enough.” —In an interview with Business Insider’s Henry Blodget, Zuckberg opened up about innovation, management, and more. Recently, however, he announced that Facebook would be changing this motto.

6. “This is a perverse thing, personally, but I would rather be in the cycle where people are underestimating us. It gives us the latitude to go out and make big bets that excite and amaze people.” —The entrepreneur offered his thoughts on dealing with skeptics, in an interview at TechCrunch’s Disrupt SF conference in September 2012, as reported by Forbes.

7. “People can be really smart or have skills that are directly applicable, but if they don’t really believe in it, then they are not going to really work hard.” —From a Stanford University speaker series on hiring the right people, given October 2005.

9. “In Silicon Valley, you get this feeling that you have to be out here. But it’s not the only place to be. If I were starting now, I would have stayed in Boston. [Silicon Valley] is a little short-term focused and that bothers me.” —Also from the October 2011 interview at Y Combinator’s Startup School in Palo Alto, California.

10. “The question I ask myself like almost every day is, ‘Am I doing the most important thing I could be doing?’ … Unless I feel like I’m working on the most important problem that I can help with, then I’m not going to feel good about how I’m spending my time. —From Marcia Amidon Lusted’s biography Mark Zuckerberg: Facebook Creator.

Envious of the tech prodigy’s entrepreneurial success? Take his advice, and start breaking something today. 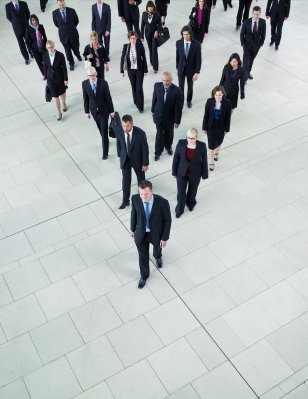 4 Biggest Myths About Being a Great Leader
Next Up: Editor's Pick