The Paradox of the Christian CEO

PM Images—Getty Images
Ideas
By James Martin
James Martin, SJ, is a Jesuit priest, editor at large of America and author of the new book Building a Bridge: How the Catholic Church and the LGBT Community Can Enter into a Relationship of Respect, Compassion and Sensitivity

The statistics are ridiculous. CEOs in the United States make roughly 300 times as much as the average worker, and 770 times that of the minimum-wage earner, according to data from national labor organization AFL-CIO. By any measure, that’s a problem. On top of that, average family income is worse than it was 15 years ago. That’s the first time that statistic has dropped since the Great Depression. Some of that has to do with the out-of-whack system by which CEOs are paid.

When it comes to executive compensation, people have rightly asked: How much is too much? But here’s a question that isn’t often asked: Does Jesus have anything to say about this?

Let me answer that not only as a Jesuit priest, but as a graduate of the Wharton School of Business. Before entering the Jesuits, I was a finance major and worked for six years in corporate finance and human resources at General Electric. My approach to executive compensation, then, is from a financial and a human resources point of view–but also from a Catholic perspective.

The Catholic perspective on salaries, compensation and labor is, in general, the Christian perspective. And the basis for that is the Gospels. Everyone knows what Jesus asks of his followers: love your neighbor. Pray for those who persecute you. Forgive someone 70 times 7 times. And care for the poor.

That last injunction is something Jesus asks us to do again and again. But it’s important to remember that Jesus not only asked us to care for the poor, he also was poor—or at least on the lower economic rungs in his time.

Jesus was born into a poor family in a backwater town. Only 200 to 400 people lived in Nazareth in his day, mainly families eking out a living through farming. Jesus worked as a carpenter, seen then as a low-class occupation ranking below the peasantry, since the carpenter did not have the benefit of a stable plot of land.

In his own lifetime, Jesus witnessed the disparities between rich and poor, and in his public ministry he constantly pointed his followers to care for the poor. In the Gospel of Matthew, Chapter 25, Jesus says that the way we treat the poor and marginalized, whom he calls the “least” among us, will be the litmus test for entrance (or non-entrance) into heaven.

Where do these teachings come from? Most Christians would say they were divinely inspired—and they were. Jesus was fully divine. But there was some human experience at work too. The poor carpenter knew how the other half lived. In other words, Jesus would have seen the result of gross income disparities—even as a young man.

An hour-and-a-half walk from Nazareth, for example, was a booming town called Sepphoris, then being rebuilt by King Herod. Archaeological research reveals a town of 30,000 people with an amphitheater that seated 3,000 people–as well as courts, a royal bank and houses with frescoes and mosaics. In terms of affluence, it was worlds away from Nazareth.

Most likely, a poor carpenter would have made the short walk to Sepphoris many times to find employment. In Sepphoris, Jesus would have seen how the wealthy lived, and may even have helped to build some expensive houses. As he carried his tools back to Nazareth, he would likely have pondered these differences in living conditions.

Such human experiences influenced his teachings, which often focus on work, workers, fair wages–and disparities between the rich and the poor. One of Jesus’s parables, in fact, conveys a palpable disgust with gross income disparities: “The Rich Man and Lazarus” (Luke 16:19-31), in which a rich man passes by a poor one every day on his doorstep, and refuses to help. At the end of the story, both men die. You can guess who goes to heaven and who goes to hell.

This, then, is the Christian perspective.

Beyond this, Catholic social teaching has much to say about economic conditions. These teachings build on the Gospels and, as embodied in the papal encyclicals, enjoy a high level of authority in the church.

Catholic social teaching focuses more on minimum wages than on the upper end of the pay scale. There is, as far as I know, nothing explicit about CEO pay in the major Catholic social teaching documents, that is, about maximum wages. Nonetheless, one can extend the logic to address what you could call “excessive maximum wages,” which effectively make it more difficult to provide a decent minimum wage for the lower wage workers.

In other words, the dollar placed into the pocket of the CEO comes out of everyone else’s pockets. Money in even successful corporations is finite. A corporation makes a certain amount of profit per year. When deciding on CEO salaries and benefits, corporate boards are, in essence, allocating dollars among individuals.

Fairness, equity and solidarity are constant themes in Catholic social teaching, particularly in Pope Paul VI’s 1967 encyclical Populorum Progressio. The recently beatified Pope Paul decried the situation where misery and luxury rub shoulders, suggesting great discomfort with the extremes of the rich and poor. Other encyclicals repeat the church’s opposition to great levels of disparity in income.

In fact, some Catholic theologians today posit not just a “minimum wage,” but “maximum wages.” Needless to say, that may not be a popular idea among any executives already opposed to raising minimum wages.

Over and above this is the question of need, how much does a CEO need—or, for that matter, any of the super rich?

The question I would ask Christian CEOs is blunt: What do you want to say to Jesus when you reach the gates of heaven? That you took as much as you could, or as much as the market would bear, because the board okay’d it? Or that you accepted what you thought was just, and understood the needs of your fellow men and women, who may have worked even harder than you?

And if you don’t like hearing those questions from me, just imagine hearing them from Jesus.

James Martin, SJ, is a Jesuit priest, editor at large of America and author of several books, including the New York Times bestsellers Jesus: A Pilgrimage and The Jesuit Guide to (Almost) Everything. A version of this article originally appeared at America magazine. 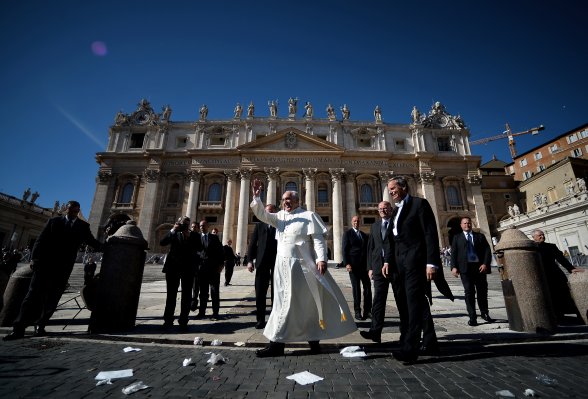 The Catholic Church Needs to Embrace Single Parents Like Me
Next Up: Editor's Pick