The War That Shaped Women's Legs

A woman puts on nylon stockings, circa 1940
Gamma-Keystone / Getty Images
By Lily Rothman

In early 1940, TIME reported that something strange was going on in Wilmington, Del.: every Wednesday, women would wait for the stores that sold lingerie to open and then rush in, ready to offer proof that they were Wilmington residents.

The reason for the rush? Wilmington was the home of E.I. du Pont de Nemours & Co., the chemical company better known as DuPont, and was the only city in America where nylon stockings could be purchased, for between $1.15 and $1.35 a pair (and only by residents of Wilmington). By the end of each Wednesday, the stores would be nearly sold out. Even though silk stockings were cheaper — about $1 a pair, by TIME’s reckoning — the nylons sold out for months after their debut on this day 75 years ago, Oct. 24, 1939.

Shortly after the discovery of nylon — which DuPont still touts as the first-ever “true synthetic textile fiber” — was announced in 1938, a TIME reader summed up the reasons behind the excitement. In a letter printed in the June 5, 1939, issue, she captured the feeling that it was a patriotic duty to boycott items coming from Japan, which happened to be the nation’s main source of silk:

A follow-up in the letters section two weeks later noted that readers could take comfort in the fact that “the Nylon girls” at the World’s Fair did wash their stockings every night — and it turned out that the Nylon girls did more than demonstrate the new product. Though much was made of the idea that imports from Japan might be as much as halved when national sales of Nylon began in May of 1940, the marketing certainly didn’t hurt. When that day came, TIME reported that the 6,000-dozen pairs that had been sent to New York City stores were almost all gone at the end of the first day, despite a two-pairs-a-person limit, setting hosiery sales records for many stores.

In 1941, silk imports from Japan were discontinued altogether, affecting stocking-wearers among many others. Since production of nylon was still ramping up, women mobbed stores to get new nylons before supplies ran out. “In Denver, women bought $125,000 worth of stockings in two days—enough to provide every woman over 14 in Denver with a pair, at 92¢ apiece,” TIME reported that August.

But the craze couldn’t last too long: the next year, DuPont announced that their supplies of nylon would go to military purposes (like parachutes) rather than garment manufacturers; throughout the rest of the war, nylon hose was in short supply. When it did return to the market, so did silk from Japan and other synthetic materials, though nylon was still preferred by many. These days, however, all that fuss over stockings seems pretty silly: it doesn’t matter so much what the stockings are made of when lots of women don’t wear them at all. 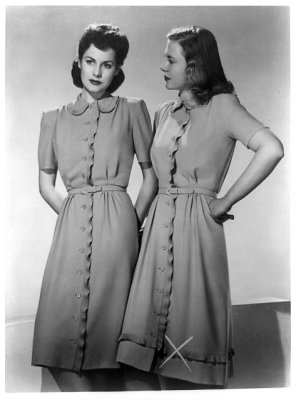 The Bizarre History of Women's Clothing Sizes
Next Up: Editor's Pick