The Canadian National Anthem is performed in honor of the shooting victims in Ottawa during the game between the Philadelphia Flyers and Pittsburgh Penguins at Consol Energy Center on Oct. 22, 2014 in Pittsburgh, Pa.
Gregory Shamus—NHLI/Getty Images
By Alex Fitzpatrick

Hockey games typically only start with Canada’s national anthem when there’s a Canadian team on the ice — Ottawa, Toronto, Montreal, Vancouver, Edmonton, Calgary or Winnipeg. But that wasn’t the case on Oct. 22, when the Pittsburgh Penguins hosted their rival Philadelphia Flyers just hours after a Canadian soldier was shot and killed in an attack outside Parliament in Ottawa.

With the National Hockey League having postponed a planned Wednesday game that would’ve seen the Ottawa Senators host the Toronto Maple Leafs, it fell upon the Penguins to honor the slain soldier and those grieving by leading fans in a heartfelt rendition of O Canada, with the Pittsburgh rink digitally draped in a Canadian flag.

You can watch the touching footage above. 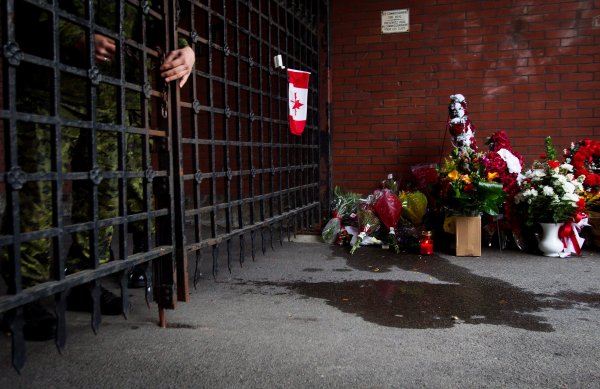