photo10&mdash;hand out
By Richard Lacayo

For Henri Matisse, the first years of World War II were a watershed for many reasons–all of them miserable. In 1939 his wife Amélie, who suspected that he was having an affair, ended their long marriage. The following year, Hitler’s armies would conquer France, then divide it between the German-occupied north, where Amélie and the children lived in a Paris suburb, and the puppet Vichy regime in the south, where for decades Matisse had been spending most of his time, in Nice. One year after that, Matisse, by then 71, was diagnosed with duodenal cancer. It led to surgeries that left him a semi-invalid, confined mostly to his bed or a wheelchair until his death in 1954.

A trifecta of calamities–who would have blamed him if he had sunk into despair and taken his art with him? But the man who gave birth to the most voluptuous department of French modernism was not somebody to allow pain to gain a foothold in his work. Out of those dark years would come some of the richest, most inventive and purely blissful pictures of his long life. Those are the cut-paper collages gathered for “Henri Matisse: The Cut-Outs,” a completely dazzling show that runs through Feb. 8 at the Museum of Modern Art (MOMA) in New York City.

What the cut-outs required of Matisse was something he was only too pleased to do: immerse himself even further in color, the core concern of his life as a painter. To his delight, they let him slice directly into the very substance of crimson, aquamarine, lime green, yellow, white and black. “Sculpting with color,” he called it. You think of Titian, who in old age sometimes put aside his brush and used his fingers to push pigment across the canvas. It’s as though both men needed to literally lay hands on the thing that had obsessed them all their lives.

Wide fields of color–pulsing flats of monochrome–had been the platform on which some of Matisse’s most advanced early work had been built, like The Red Studio in 1911. By the 1920s and ’30s, however, he was mostly producing pictures with academically modeled figures and illusionistic depth. Look at any of his pillowy odalisques draping themselves across the upholstery in madly patterned rooms: lovely and intricate canvases, many of them, but they seemed a retreat from the fearlessly reductive work of his youth and cost him his position at the forefront of the avant-garde. But in his old age, the cut-outs–with their radical flatness and semi-abstraction, somehow combined with the most beguiling lyricism–would put him back there.

The germ of the idea came to Matisse as early as 1931, when he began work on The Dance, a three-panel wall painting commissioned by the Philadelphia collector Albert C. Barnes. Matisse first plotted out that painting in scissor-cut paper, full-scale elements that he moved around on the floor to arrive at the final composition. By the 1940s he was making paper collages for covers of the art magazine Verve. But the turning point came in 1943, when the publisher of Verve asked Matisse to produce cut-outs to be reproduced as stencil prints that would become the famous book Jazz. By that time, the threat of an Allied bombing campaign against Nice had forced Matisse to establish a new studio in nearby Vence, where he gestated kinetic blasts of color like The Codomas and dancing figures like The Fall of Icarus. Eventually he realized that the original collage, not any subsequent reproduction, was the keeper, the thing to frame and display.

These images Matisse could produce from his bed or wheelchair. His assistants covered sheets of white paper with a layer of opaque watercolor; he cut shapes and rearranged them on a board or had assistants display them across the walls, which turned whole rooms into canvases and prompted Matisse to think big and then bigger. So “The Cut-Outs,” curated by MOMA’s Karl Buchberg, Jodi Hauptman and Samantha Friedman, climaxes with mega-works like The Swimming Pool, a newly restored full-room installation, and The Snail, an immense spiral of colored panels that hovers on the edge of abstraction.

Were the cut-outs therapeutic for Matisse? Having endured so much at the hands of his doctors, was he drawn unconsciously to cut paper as a way to sublimate the pain of his surgeries, to gain control over the very idea of cutting? Now he was the one wielding the sharp edges, using them to produce movement and vitality instead of surrendering it, taking an instrument of pain and turning it into an instrument of pleasure. Could there be a more Matissean thing to do? 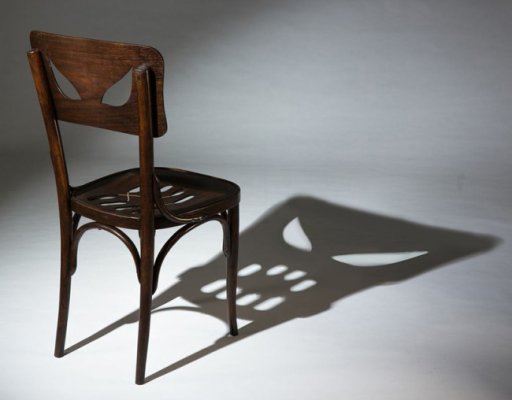 Have a Seat This Halloween in a Chair That Casts a Spooky Shadow
Next Up: Editor's Pick