LOS ANGELES, CA - APRIL 26: Recording Artist Mick Fleetwood joins Jenny Boyd at she signs copies of her book "It's Not Only Rock 'N' Roll" at Barnes & Noble bookstore at The Grove on April 26, 2014 in Los Angeles, California. (Photo by Paul Archuleta/FilmMagic)
Paul Archuleta&mdash;FilmMagic
By Claire Howorth

Why did you and the band decide to get back together now?

We’ve been in continuum since Christine [McVie] left, on and off, so the band never broke up. It was really more about the unbelievably cool re-entrance of Christine. There was no “Oh, we better blow the trumpet and rally the reunion of the band”–it was sort of magical the way it all happened.

How have your relationships with the other members changed over the decades?

Mine have certainly changed the least because I wasn’t in a marriage or full-blown relationship [with them]. But things that needed to be addressed have been addressed emotionally and, in truth, are still. Especially with Stevie [Nicks] and Lindsey [Buckingham]. Having Christine is instilling a huge amount of healing in ways that we can’t even realize right now. It’s sort of a very cool fable–half nightmare, half fairy-tale story.

Is it a coincidence that your memoir, Play On, comes out at this moment?

It is. I started working with [co-writer Anthony Bozza] two years ago, and we were thinking it was going to come out a lot sooner. But it all converged at the same time.

You guys have a kind of witchy magic about you.

I always joke–because I used to manage the band–that this is the worst-run franchise in rock ‘n’ roll. If you look at what happened to us on paper, you’d say, “It’s simply not possible that these clowns can survive this.”

You write of your affair with Stevie, your cocaine use, the crushing process of making Rumours. What allowed you to be confessional?

I wanted things like that to be put in place–for me and Stevie, we know what happened. Our relationship is not unknown. We fell in love, we were already great friends, it was not to be, and we went our separate ways. There’s nothing to hide.

Which part of your life did you feel you most needed and wanted to tell?

Learning how to handle the huge theater of my career and how almost everything I dreamed of literally came true, from [me being] this funny little creature who just wanted to play drums and play music.

What is it about being a musician that makes some of you more prone to the wild life?

It was really quite simple until it got quite complicated. A lot of creative people are vulnerable–they’re just so focused on what they’re doing. So it’s quite viable to dumb out those feelings with substance or just flat-out lifestyle.

You’ve said that rhythmic dyslexia affected you. Does it still, in the way that stage fright does?

I have found out that I love to be really, really, really hot. It tells my little brain that I’m really doing it, like a rat experiment. So I have heaters all around me [when I perform]. My worst nightmare would be that the auditorium air conditioners are going. I’m very superstitious–“Did I put the left sock on first?” As long as I do my little tricks, I’m usually fine and dandy. But I really don’t know what I’m doing. I watch Chris, and I watch Lindsey. When you see me looking around that stage, I’m not only enjoying myself, I’m also communicating. That’s my script.

Do you know what you’re shouting during your drum solos?

No! I’ll always go into, “Now there’s one thing I really want to know: Are you with me?”

The book title is Play On. So will you go back into the studio?

[Some of us] have been. And now the hope is we can put all we’ve done together and also have Stevie be part of that creative equation. Finding time with the tour, which is hugely successful, is sort of a growing animal. No one can believe it, not even us. 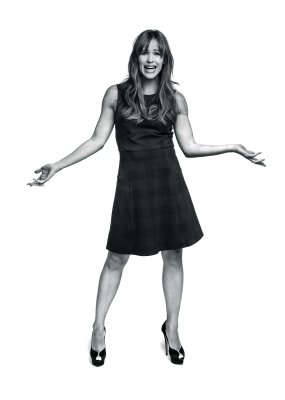 10 Questions with Jennifer Garner
Next Up: Editor's Pick