For years, Tech Titans have been hailing the dawn of the mobile-payment revolution: every phone will double as a wallet, every merchant will be able to accept virtual cash, and as a result, lines will move faster, consumers will collect more loyalty rewards, and retailers will make more money.

The reality, however, has been far more complex. High-profile solutions, like Google Wallet, have struggled to take off after launching with a limited number of compatible banks, credit-card issuers and retailers. And customers have been wary of trusting their banking information to the omnipresent cloud in an era of endless data breaches, especially when credit cards work just fine.

The numbers confirm it. Although Americans are expected to use their phones to spend $4.9 billion in stores this year–more than ever before–that figure pales in comparison with the $4.8 trillion they’ll spend using credit cards, according to Euromonitor. As Anuj Nayar, PayPal’s senior director of global initiatives, puts it, nobody “has quite nailed the overarching reason to pull out your phone to pay.”

But Apple Pay, which launched Oct. 20, may well change the game. At its core, the service is appealingly simple: customers wave their iPhone 6 or iPhone 6 Plus to buy products without even unlocking the device. (Apple takes a small cut from each transaction.) And it’s launching with unprecedented support from retailers, banks and credit-card companies. Among them: McDonald’s, Walgreens and Bloomingdale’s; Chase and Bank of America; and Visa, American Express and MasterCard.

Apple Pay addresses security concerns as well. When users buy things using the system, retailers receive a onetime “dynamic code” instead of an actual credit-card number, which is meant to make customers’ data ultra-secure, even if a merchant is hacked–as Target and others were last year.

But Apple Pay’s biggest asset may be that it’s a system from, well, Apple. This is a company known for launching products that revolutionize industries, and it has already built an e-commerce empire. There are at least 500 million cards on file in the iTunes store, and iPhone owners use them to buy masses of apps and music. In fact, they have cumulatively spent more than twice as much on mobile apps as their Android-device-owning counterparts, according to mobile-analytics firm App Annie.

That kind of “curated environment” will make it easier to mainstream the idea of mobile payments, says Matt Dill, Visa’s senior vice president for innovation and strategic partnerships, commerce and network payments.

The system is far from perfect, however. One big caveat: Walmart, the U.S.’s largest retailer, won’t support Apple Pay upon its launch. Instead, it and other stores like Best Buy and Target are developing a competing mobile-payment platform called CurrentC, set to launch sometime next year. Apple Pay also lacks a loyalty-rewards program, which has been key to the success of one of the world’s most popular payment apps: Starbucks, which racks up 6 million transactions per week, or 15% of the coffee chain’s total.

And of course, even if Apple Pay is a smash hit, it can’t revolutionize the entire payment ecosystem. The iPhone touts a 42% smartphone market share in the U.S. (second to Android phones), and older models aren’t equipped to support the tap-to-pay technology.

Still, Apple Pay is crucial to the future of mobile payments–especially in-store mobile payments, which Euromonitor projects will rise to $74 billion in the U.S. by 2019, more than 15 times the current amount. It may not take the lion’s share of those sales, but it will be instrumental in prodding retailers to buy the equipment required to make mobile payments work–and persuading customers to give the technology a shot. “Apple has a great brand, and it’s the type of company that can really change consumer behavior,” says Michelle Evans, a consumer-finance analyst at Euromonitor. “But this is still very early days.” 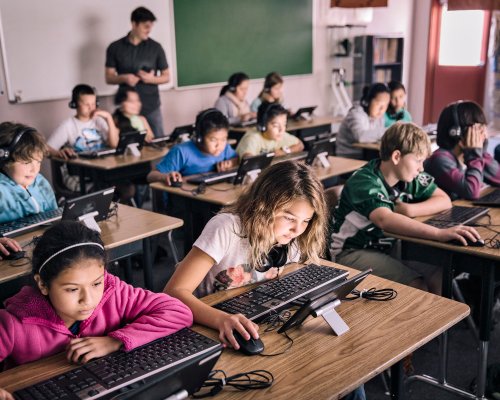 The Paperless Classroom is Coming
Next Up: Editor's Pick