A U.S.-led coalition air strike over the town of Kobani, where Kurds are battling ISIS
Lefteris Pitarakis—AP
By Karl Vick

A theater of war is not nearly as theatrical as it sounds but little more than a smudge on a map where the business of a conflict is carried out. Yet every now and then, the fates converge to build a stage upon an actual battlefield. During the U.S. invasion of Afghanistan in 2001, Tora Bora was such a place, the site of a massive bombing campaign that could be watched from your living room. And in October, the obscure Syrian border town of Kobani appeared in the spotlight. Now presenting: America’s newest war.

After 10 weeks in the skies over Iraq and a month of bombing Syria, President Barack Obama’s fight against the Islamic State of Iraq and Greater Syria (ISIS) was suddenly not only viewable but also imbued with genuine suspense. Watched from Turkish border hilltops just a mile away and seen on live television worldwide, Kobani became an island of resistance to a jihadi juggernaut, surrounded on three sides by territory ISIS had captured in an accelerating conquest that nearly shattered Iraq and built the foundation for the group’s self-proclaimed caliphate.

Kobani once seemed certain to fall to ISIS, its remaining residents bound for massacre or enslavement. In all, some 200,000 people from the surrounding area sought refuge in Turkey. But the longer Kobani holds out, the more lessons it reveals about a war that could last years. In a town of 50,000 that outsiders once knew mostly for the ferocity of the local sand flies–if they knew it at all–two essential elements have been laid bare. One is the challenge of waging a winning air campaign without forces on the ground, something Obama has ruled out. The other is painfully reminiscent of past U.S. battles in the Middle East: the knot of overlapping interests, rivalries and arguments of stupefying complexity, even to old hands in the region.

“You go into meetings with officials, and literally they will admit to you they don’t know what to do,” says Hugh Pope, who follows Turkey and the Kurdish areas for the International Crisis Group. “It’s very difficult to actually manage an outcome there.” And the outcome–on the battlefield and in diplomatic conference rooms–will say a great deal about the war that lies ahead.

Kobani stands on Syria’s Northern border, on the rolling treeless plain that extends from Turkey. The barren terrain here could not differ more from the lush vegetation that offers cover along the Euphrates River, where ISIS has rolled up a series of victories since 2013.

So when ISIS jihadis began shelling villages around Kobani six weeks ago, their positions should have made easy pickings for U.S. pilots. But the air strikes started slowly, and by Oct. 6, ISIS fighters had raised their black flag on a hill at Kobani’s edge and jihadis had penetrated the town itself. Turkish President Recep Tayyip Erdogan warned the international community bluntly: “Kobani is about to fall.”

A massacre was sure to follow. But Washington wasn’t prepared to stop it. “As horrific as it is to watch in real time what is happening in Kobani, you have to step back and understand the strategic objective,” Secretary of State John Kerry said on Oct. 8. Kobani, he suggested, simply wasn’t vital to the larger war.

At the same time, critics called the crisis proof that air power alone–without ground troops–wouldn’t be enough to defeat the jihadis. Indeed, ISIS targets had grown scarcer in the weeks since the war began. Its fighters stopped moving in targetable convoys, shifting to civilian vehicles. Leaders dispersed. “They’re afraid to assemble command groups for fear of being struck by us,” says General Lloyd Austin, head of U.S. Central Command.

But in Kobani, things started to change. On Oct. 15, bombs began falling not just on buildings but also on individual ISIS fighters. Sniper hideouts and a machine-gun nest were blown away. Two days later, the black flag was down from the hill and the corpses of ISIS fighters littered the streets. “Normally, if we have time, we try to bury them,” says a Kurdish fighter named Mohammed by cell phone from Kobani.

American bombs had turned the tide–but only with inside help. Kurdish spotters with cell phones inside Kobani reported ISIS positions to a command post in Erbil, the Kurdish capital of northern Iraq. That post is jointly staffed by Iraqi Kurdish and U.S. military officials, who then relayed the targets to coalition pilots.

It’s a makeshift substitute for the trained American forward air controllers who would otherwise be on the ground, even “painting” a target for pilots with a laser. But it’s working. In Kobani, U.S. officials estimate that ISIS lost hundreds of fighters in a month of combat. Yet the group–which may have 30,000 fighters, according to estimates–appears willing to sacrifice even more. Forget the strategic objective: Kobani has become a matter of pride–a symbol in a struggle of wills–and ISIS commanders have been only too eager to replace their dead with fresh reinforcements.

That’s just fine with the U.S. general in charge. “I can take advantage of the opportunity he has presented me … by continuing to funnel fighters into Kobani,” says Austin. “The more I [reduce] him there, the less I have to fight him on some other part of the battlefield.” That battlefield, already tilted away from ISIS by more-precise air strikes, is growing steadily less hospitable for the jihadis. In a sign of America’s new commitment to a town once dismissed as unimportant, U.S. C-130 Hercules transport planes on Oct. 20 dropped rifles, ammunition and medical supplies to Kobani’s defenders. As a senior Administration official put it, “The more this enemy wants that town, the more targets they’re presenting, the more resources they’re adding to it, the more opportunities we have to go get them.”

The battlefield may be terrifying, but it has the virtue of relative clarity. Not so the political landscape in this part of the world.

Start with Turkey. A U.S. ally and NATO member, Turkey opposes ISIS. Yet during the fight over Kobani, its tanks remained on its side of the border fence. Turkey allows the U.S. to fly reconnaissance drones from nearby Incirlik air base–but not combat strikes. The mixed message reflects a regional ambivalence that threatens to undermine Obama’s campaign against ISIS.

“Turkey has always been O.K. about doing things secretly with America,” says Pope of the International Crisis Group. “But doing things publicly is very dangerous.” Especially against ISIS: “There’s public sympathy for the Sunni cause in the Middle East, which translates into a kind of passive support for ISIS.”

Turkey faces the same internal tensions as other majority-Sunni partners in the fragile anti-ISIS coalition, including Jordan, Saudi Arabia and the United Arab Emirates. Those three are monarchies already caught up in a conflict largely driven by deep sectarian differences: Sunni vs. Shi’ite, with the Iranian-backed Syrian regime of President Bashar Assad firmly in the Shi’ite camp. “There are two competing objectives within the coalition,” says an Arab government official. “Some countries are more interested in removing Assad, while other countries are more interested in addressing the extremist threat. The challenge the U.S. will face is how to keep the coalition together and functioning given these divergent goals.”

Turkey’s priority is clear: get Assad first. And the picture is further complicated by the Kurds, an ethnic group numbering about 30 million who have long desired a state of their own. But creating a greater Kurdistan would mean carving chunks from the four states where they live now: Iraq, Iran, Syria and, most of all, Turkey, home to about 15 million Kurds.

Turkey actually gets on well with Iraq’s Kurds, buying oil from their quasi-state in northern Iraq. Not so with the Kurds in Syria and in Turkey itself. Many of those are aligned with the Kurdistan Workers Party, known by the Turkish initials PKK, which has been at war with Turkey for 30 years. The original goal of that war, Kurdish independence, has lately been ratcheted down to minority rights, a moderation that brought Erdogan into serious peace talks. But the battle for Kobani has put a strain on those too. Erdogan calls both the PKK and ISIS terrorist groups and rebuffed U.S. overtures to aid Kurds fighting in Kobani. “[The U.S.] cannot expect such a thing from us, and we cannot say yes to such a thing either,” Erdogan told reporters. Turkey’s air force even bombed a PKK position within its borders on Oct. 13. Why then, in Erdogan’s view, should Turkey choose a side in Kobani? (Under U.S. pressure, Turkey agreed on Oct. 20 to allow Kurdish reinforcements to cross into the besieged city–but only Iraqi ones.)

And why wage war on ISIS if ISIS is waging war on Assad, whom Washington also opposes? In answer, U.S. officials offer one word: Iraq. “Iraq is our main effort, and it has to be,” says Austin. “The things we’re doing in Syria are being done primarily to shape the conditions in Iraq.”

It was the collapse of Iraqi politics into Shi’ite-dominated sectarianism under former Prime Minister Nouri al-Maliki that helped lead to the collapse of Iraq’s army, allowing ISIS free rein. The air campaign is meant to buy time for Baghdad to win over its Sunni minority, so its sons fight in a revived Iraqi army–not against it.

For now Kobani is center stage as the world watches the town’s desperate struggle live on CNN and the BBC. But in the war against ISIS, even as the fighting intensified on the Syrian-Turkish border, a more significant development occurred in Baghdad. On Oct. 18, a Sunni was sworn in as Iraq’s Defense Minister, while a militant Shi’ite was given Interior. The selections happened offstage, away from cable-television cameras, in the place where this war may truly be won. 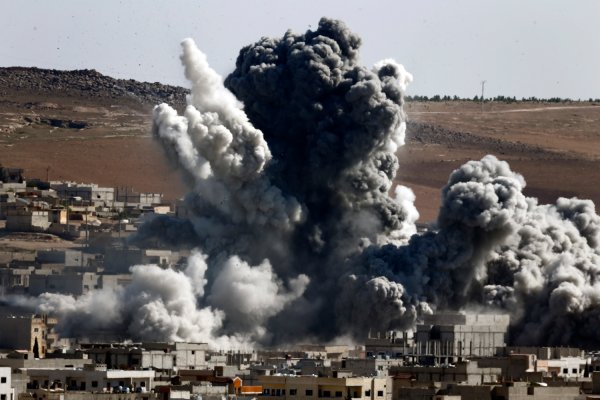 Coalition Air Strikes in Syria Have Killed 500
Next Up: Editor's Pick