A friend of murdered Filipina Jennifer Laude testified that the American suspect, who went out with the two of them on the night of the crime, didn’t know that they were transgender.

Pemberton allegedly met Laude and Gelviro on Oct. 11 at a bar in Subic Bay, a port that often hosts U.S. warships. He was visiting for a joint military exercise involving 4,000 American soldiers and sailors. Gelviro claimed to the hearing that Pemberton was drunk but friendly, and that he “thought we were real women.”

The three of them then allegedly went to a motel in nearby Olongapo City, where Gelviro said she left the two others alone in a room. Gelviro claims that, a little while later, the motel cashier notified her that Pemberton had left and that Laude was unconscious in the room, her head submerged in the toilet bowl.

Senator Miriam Defensor Santiago, who chaired the hearing, later said she considered the evidence against the suspect “damning,” reports the Philippine Star.

The now almost two-week-old case has stoked massive criticism over a bilateral agreement that allows the U.S. to keep custody of military personnel accused of committing crimes on Philippine soil. Pemberton was transferred Wednesday to a Philippine military base, but is still being guarded by American servicemen.

“We have our own guards, and yet they don’t seem to trust them,” said Defensor Santiago according to Asia One. “And we’re in our own country, not America.”

Philippine President Benigno Aquino rebutted claims that local authorities were going too easy on the suspect at a foreign correspondent’s forum in Pasig City on Wednesday.

“He is not being treated with kid gloves,” Aquino said, “and the Americans, may I reiterate, are conforming to the [Visiting Forces Agreement under which] they have to make this person and others available for both the investigative and the judicial processes that are forthcoming.”

Meanwhile, Jennifer Laude’s sister Michelle testified to the panel that the victim was not a sex worker. During the year leading up to her murder, she had barely been outside the house, Michelle said, claiming that Jennifer was subsisting on a monthly allowance from her fiancé.

Read next: Laverne Cox Talks to TIME About the Transgender Movement 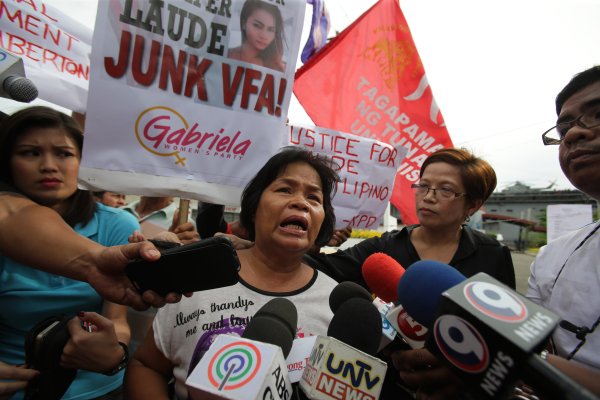