Why Witches on TV Spell Trouble in Real Life

The witch is back.

In books and films, on stage and on TV, interest in witchcraft is brewing—to a degree that rivals 17th-century Salem’s hysteria about the topic. On the big screen, Angelina Jolie made a bad witch look so good that her Maleficent performance inspired this year’s top Halloween costume for women. The small screen has lately featured a similarly enchanting cast of supernatural characters. Last season on FX, the descendants of Salem witches ran a New Orleans boarding school — a sort of black-magic Hogwarts — in American Horror Story: Coven. On Lifetime, modern-day witches court soapy drama, centered on love triangles and revenge, in Witches of East End. On WGN, historical figures live again in Salem, this time with real magical powers. And there are rumors that a period drama about the witch trials might be in the works at HBO.

In the stage world, the Washington Post recently noted a “striking uptick in Salem-themed dramas,” and academics have seen a similar surge in scholarly writing about the 1692 witchcraft trials.

There’s something about witches, it seems, that’s as compelling to us today as it was to the Puritans. But while the 1692 trials were a terrifying and tragic reality show, it’s easy to dismiss the modern fantasy of witchcraft as mere silliness. Not so fast, scholars say: When witchcraft makes a comeback, it’s often a sign of trouble in the real world. Stories of witches cast a captivating spell that both challenges and comforts us in those times — such as now.

“Interest continues to grow, and at an exponential rate,” the historian David Hackett Fisher writes in the preface to A Storm of Witchcraft: The Salem Trials and the American Experience, by historian and archaeologist Emerson Baker. Published this month, Baker’s book joins the nearly 2,000 witch-related titles on Amazon’s list of books released in the last 90 days. (The list includes 23 history books along with almost 600 classified as fantasy and roughly 400 described as “paranormal romance.”)

This is no flash in the cauldron: In the three centuries since Puritan leaders convicted and hanged 19 people for witchcraft, depictions of American witches have been a pop-cultural fixture. Often, their story serves as an allegory for persecution, injustice and the dangers of mob mentality, perhaps most famously in Arthur Miller’s 1953 play The Crucible, a thinly veiled takedown of the McCarthy-era paranoia about communists infiltrating American society.

So what’s behind today’s renewed obsession with witches? Baker, a history professor at Salem State University, argues that it could have its roots in the post-9/11 panic over terrorism and what could be seen as a Salem-like erosion of civil rights in the name of security — or, more recently, in the revelations that the National Security Agency seems to be spying on ordinary citizens as stealthily as neighbors spied on neighbors in colonial Salem.

Witches, like terrorists, “threaten to wipe out everything you believe in. If they could, they would overthrow your government, overturn your faith, and destroy your society,” Baker writes.

The difference, of course, is that terrorists are real, while witches are not. That wasn’t always an “of course,” however: witches were as real to the colonists as smallpox, and even more dangerous, since there was no limit to the extent and variety of damage they could inflict under Satan’s command. When the Salem trials finally stopped — nine months after the apparent bewitching of a minister’s daughter and niece prompted a community-wide freak-out that led to more than 150 arrests — it wasn’t because the colonists no longer believed in witches. Educated people still considered them a threat well into the 18th century.

Instead, a growing opposition movement simply argued that justice was being corrupted. Innocent people, they said, were paying the price for the fear that led community leaders to convict based on thin shreds of evidence, such as the word of other accused witches or those claiming to be their victims. The first to speak up were presumed to be in league with the witches, and likewise executed. As more voices joined in the protest, however, the tide of public opinion shifted in their favor.

Baker believes that echoes of those protests can be heard today in objections to indefinite detention for people accused of terrorist ties based on similarly tenuous evidence.

“That’s a national debate we’re having — not over people being falsely executed, but about what rights we’re willing to sacrifice or suspend in order to protect the other rights we hold dear,” Baker tells me. “To what degree do we risk losing our liberties and the very things we’re trying to defend in the way that we try to protect ourselves?”

In Salem, the balance was clearly off, even to those who believed in witches. The incident quickly became “our national cautionary tale,” according to Gretchen Adams, a history professor at Texas Tech University and the author of The Specter of Salem. Then, as now, Americans were deeply concerned about the implications of the trials, which involved not an overzealous fringe group but some of the most prominent members of the Massachusetts Bay Colony. Ben Franklin’s aunt accused three witches, all of whom were hanged. The colonial governor implicitly condoned the trials, calling for their end only after his own wife was accused.

After the fact, the governor grew so worried about the potential backlash if too many people learned of Salem’s miscarriage of justice that he made it illegal to write about the trials. It was what Baker calls “the first large-scale government cover-up in American history.” Word spread nonetheless, and the story had legs.

Even Ben Franklin, notwithstanding his aunt’s place on the wrong side of the story, satirized the trials in a 1730 issue of the Pennsylvania Gazette, with an Onion-esque piece announcing that two people “had been charged with making their neighbor’s sheep dance in an uncommon manner, and with causing hogs to speak, and sing psalms,” as quoted in A Storm of Witchcraft. It was apparently not too soon to make light of the tragedy.

By the 1800s, the Salem trials had become a fixture in American literature, providing plot points for authors from Washington Irving to Nathanial Hawthorne, as Adams points out. John Greenleaf Whittier used the witch trials as an allegory in his antislavery poetry of the mid-1800s. And, Adams writes in a 2003 essay, the trials were equally popular among pulp novelists, if only as a sales device.

But why would Salem sell books? As Adams acknowledges, America’s relationship with the legacy of the witch trials has always been ambivalent: It’s a shameful episode that’s also fascinatingly mysterious.

The mystery is what thrills readers of literature and viewers of TV shows about witches. These fictional depictions tend to fall into two camps: the good witches of Bewitched and Charmed (rumored to be in reboot talks), and the bad, or at least more complicated, witches of disturbing dramas such as Salem and Coven.

As Baker sees them, the two breeds are sides of the same coin.

“In the ’60s, you have a culture that is very much worried about the Cold War,” he says. “You can hit that with the evil witch, but if you have Samantha Stephens [of Bewitched], who can wiggle her nose and make it go away, then she becomes an empowering figure for people who have little control.”

This vicarious empowerment — the fantasy that we might all possess secret powers we could unleash if we studied the right spell books or learned how to twitch our noses — is another reason why they’re seemingly immortal as cultural fixtures, coming back whenever times are troubled. In fact, according to Katherine Howe, the author of two books about witches out this year (one a collection of historical documents, The Penguin Book of Witches, the other a young adult novel called Conversion), their mainstream popularity has more to do with our personal fantasies of power, which have catapulted witchcraft from the realm of the rhetorical allegory into the world of guilty-pleasure entertainment.

“One reason for the interest in shows like Salem is that they tap into our desire for power and influence, which is probably universal to time and place,” she explains. “The difference between now and the early modern period [that ended roughly around the time of the Revolutionary War] is that, back then, claiming power for yourself that should belong to God and the state was overtly threatening. Now, instead of threatening the stability of our culture, it can be fun and even a little silly.”

In today’s witch stories, the political narrative of persecution has largely given way to a personal narrative about an ordinary person — a boy named Harry, say, or a suburban housewife — endowed with extraordinary powers. That narrative appeals, Howe says, because people everywhere, in every age, dream of being special.

The empowerment narrative even provides a tidy, if imaginary, solution to the problem of unjust persecution: If someone does wrong, even if it’s just wrong by you, you can always cast a spell. TV witches, good and bad, have recently foiled enemies by erasing memories and flipping buses, respectively.

In some cases, it seems that the return of the witch is both personal and political: Witches of East End, for one, intertwines the two in the story of two young witches who’ve lived many lifetimes already, including one that ended in execution in 1693. The joke was on Salem, however: Even death was no match for their powers.

This time around, the sisters don’t discover their supernatural nature until their 20s. One of them, a shy librarian, at first can’t believe she has abilities beyond book cataloguing. An everyman figure, she reveals the key to such stories’ enduring appeal: witch fulfillment.

“I am a rational skeptic,” she protests. “I am a wallflower.”

“Baby, no,” her mother counters, with an assurance we all secretly want to hear: “You’re magic.” 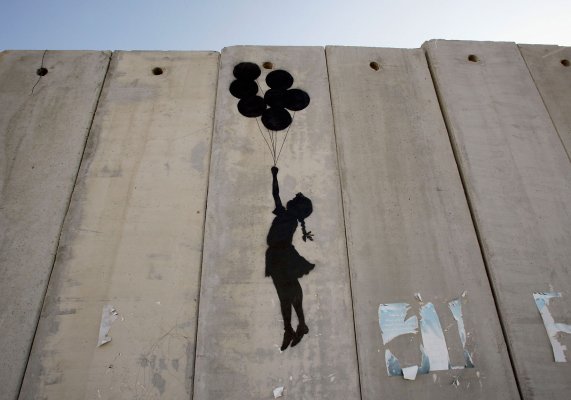 See Banksy’s Art From Around the World
Next Up: Editor's Pick