How Social Media Makes Breakups Uglier for Everyone

We get it. When you’re in the throes of a breakup, a public display of affection or hate seems like the only logical move that could possibly capture the emotions bubbling up inside your being. But, in reality, a Twitter rant about your ex is usually more pathetic and off-putting than touching or convincing. And, ever since the breakup Post-it became the breakup Facebook post, our various networks seem to be making this already-difficult process even more agonizing.

(MORE: How To End That On-Again, Off-Again Relationship — For Good)

To get a picture of what it looks like when a relationship ends on social media, researchers at Aalto University in Finland went to Twitter. They looked at tweets posted during a 28-hour period from users whose profiles mentioned another user along with a word like “boyfriend” or “girlfriend.” (Wisely, the researchers made sure not to include people whose proclaimed S.O. was a celebrity.) This left 40,000 pairs of users who seemed to be romantically linked IRL. After following these users for a period of six months, the researchers were able to pick out the ones who had broken up — and hone in on the language used in tweets before and after the uncoupling. As pictured in the resulting magnificent word clouds, the researchers found that phrases like “I hate when you” and “shut the f**k up” replaced “I love you” post-breakup.

Obviously, as our feelings towards our partners change, so do our interactions with them. But, what’s less obvious is how much of an effect that public exchange has on its audience, a.k.a. all your other followers. Sure, some of us are probably drawn to (or at least entertained by) that drama, but another study suggests the majority of your Facebook friends would appreciate if you kept your relationship news to yourself. For this one, researchers showed 100 participants fake Facebook timelines and asked them to rate the person’s levels of relationship satisfaction and commitment, based on their posts. Participants thought the Fakebookers who dished a lot about their relationships were the most satisfied — but, they also disliked them the most.

(MORE: Does Your Brain Feel The Effects Of A Breakup?)

Oversharing isn’t any good for the sharer, either, especially after the breakup. Forgetting about our exes (at least partially) seems to be an essential step of moving on. And, according to at least one small study, that’s even harder to do when your relationship details are scattered across the Internet. Here, the researchers took an in-depth look at the post-breakup behavior of 24 participants and found they could sort them into three categories: keepers, deleters, and selective disposers of their relationships’ digital artifacts. It seems those who were able to selectively disengage from their online interactions with their exes were the most well-adjusted.

So, although social media does have the power to bring us closer together, it makes it harder to forget about each other, too. But, we’ll forgive the post-relationship over-sharers, because we all know breaking up is hard to do — online or off.

(MORE: What To Do When Your Friends Break Up) 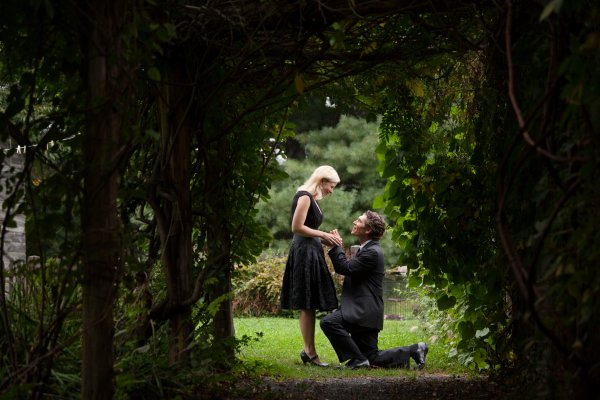 These Are the Top 5 Reasons People Reject Marriage Proposals
Next Up: Editor's Pick