There Are Antibiotics In Your Fish

When we think about food raised with antibiotics, we probably picture oversized chickens and plumped-up cows. But they’re also in our fish—both farmed and wild, finds a new study published in the Journal of Hazardous Materials.

Antibiotics are used in fish largely to treat and prevent disease, not to promote growth, says study leader Hansa Done, a PhD candidate at Arizona State University’s Center for Environmental Security. They’re dispersed into the water in fish farms and are sometimes injected into fish directly. And once they get into the fish, they generally stay there, even though their concentration diminishes over time.

The study looked at 27 fish from 11 different countries, all bought at an Arizona supermarket. Researchers used a meat grinder to pulverize the fish and tested the meat for 47 types of antibiotics. They found residues of five antibiotics, some of which are also used to treat human diseases. Residues of a kind of tetracycline, for instance, showed up in farmed tilapia, farmed salmon and farmed trout. It was also present in wild-caught shrimp from Mexico—probably due to wastewater treatment plant runoff, Done says. Even fish marketed as antibiotic-free wasn’t off the hook: researchers found virginiamycin in one sample of farmed salmon bearing the label.

All traces of the drugs were within legal limits of what’s allowed—which is a victory for our food supply, says Done, but there is a caveat: “For there to still be something in there”—after untold stages of processing and months in Done’s freezer—“means that at one point, it was injected or fed a lot more,” she says. “We just don’t know how much.”

The problem with low-dose antibiotics isn’t that they’re immediately harmful to human health, Done says. It’s that high or low levels in our food supply can breed antibiotic resistance. “Antibiotics present at levels well below regulatory limits still can promote the emergence of drug resistant microorganisms,” the researchers write in the study. In a related meta-analysis of studies on antibiotics and seafood, Done found that antibiotic resistant bacteria in seafood has grown more than 8-fold in the past three decades.

Beyond fending off disease, it’s not clear what antibiotics are doing to the fish themselves. “There’s this rumor that high levels of [the antibiotic] oxytetracycline could lead to spinal deformities in rainbow trout if it’s fed to them during their growth stages,” Done says, though she notes a definite lack of research on the matter. In the six fish she tested, the group with normal spines didn’t have detectable levels of oxytetracycline, but the three with deformed spines did—though only very slightly detectable levels, she says. 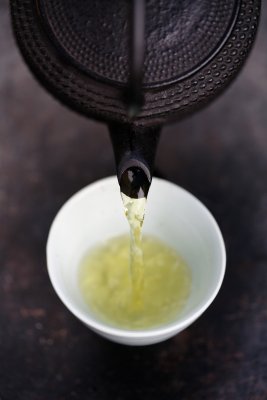 This Kind of Tea Lowers Blood Pressure Naturally
Next Up: Editor's Pick