Responding to rumors that she underwent plastic surgery, Renée Zellweger says she is healthier and happier and flattered by the attention her appearance has been getting, People reports.

“I’m glad folks think I look different! I’m living a different, happy, more fulfilling life, and I’m thrilled that perhaps it shows,” Zellweger, 45, said in a statement to People of the attention she received after an appearance at the Elle Women in Hollywood Awards in Beverly Hills on Monday.

“My friends say that I look peaceful. I am healthy,” Zellweger continued. “For a long time I wasn’t doing such a good job with that. I took on a schedule that is not realistically sustainable and didn’t allow for taking care of myself. Rather than stopping to recalibrate, I kept running until I was depleted and made bad choices about how to conceal the exhaustion. I was aware of the chaos and finally chose different things.”

Her relationship with boyfriend Doyle Bramhall has also made her happier, Zellweger said. “I did work that allows for being still, making a home, loving someone, learning new things, growing as a creative person and finally growing into myself,” she said. 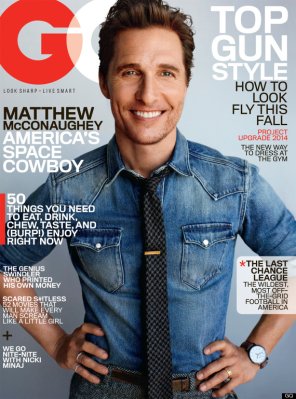 Matthew McConaughey Hopes the Redskins Don't Change Their Name
Next Up: Editor's Pick