Towards the end of the one-hour New Hampshire Senate debate on Tuesday night, Democratic Senator Jeanne Shaheen frankly discussed what could bring her down in two weeks on Election Day.

“Sometimes there’s factors that are beyond your control,” said Shaheen, when asked by the moderator, NBC’s Chuck Todd, on what she learned in her losing Senate bid in 2002. “There are things happening in the country that affect a race. And I think we’re seeing this now in this race. We’re seeing a lot of concern about what’s happening in the world. We’re seeing my opponent who has been grandstanding to make political gain on [Islamic militants in Iraq and Greater Syria], on the border, on Ebola.”

Shaheen hit the nail on the head: if she, a well-liked former governor, loses her reelection race it will be in large part because her opponent, Republican Scott Brown, has capitalized once again in an environment that’s unfavorable to Democrats. Brown, who rose in the 2010 GOP wave to represent Massachusetts as Senator, has done a good job recently in closing the gap in nationalizing the election; on Friday, the nonpartisan election handicappers at the Cook Political Report reported that the race was a “toss-up” after months leaning Shaheen. In the debate Tuesday, Brown again and again hammered Shaheen as an Obama puppet and touted himself as “the most bipartisan senator.”

“She’s voting with the President 99% of the time,” said Brown several times, including in his final remarks. “And that’s not good for New Hampshire.”

“Unfortunately when she went to Washington she changed,” he added.

“I think that making sure that almost 100,000 people in New Hampshire have access to health care is real progress for people in the state,” she said, adding that her support of the Affordable Care Act, commonly known as Obamacare, is a “fundamental difference” between the two candidates.

At various points throughout the night, Shaheen did turn the race to where she wanted it: Brown versus Shaheen. In one of the loudest cheers of the night, Shaheen ripped her opponent for flirting with a bid for Massachusetts governor before moving to New Hampshire and starting up his Senate campaign.

“I don’t think New Hampshire is a consolation prize,” she said.

But the political environment still favors Brown. When asked who she would support as Senate Majority Leader, Shaheen said she is open to replacing the current incumbent, Nevada Democratic Senator Harry Reid.

“I’m not sure who our choice will be,” she said, to some laughter. “I’m not going to speculate on who [it should be] but I think it’s important for us to have a contest in these positions because we need to think about how we’re doing business in the Senate.”

Brown gave a simpler response to one of the loudest cheers he received all night.

“Harry Reid is the problem,” he said. “And we have to get rid of him because he’s holding everything up right now.”

“So let me just say, it’ll be anybody except Harry Reid,” he concluded.

Brown and Shaheen’s next and final televised debate will be on October 30. 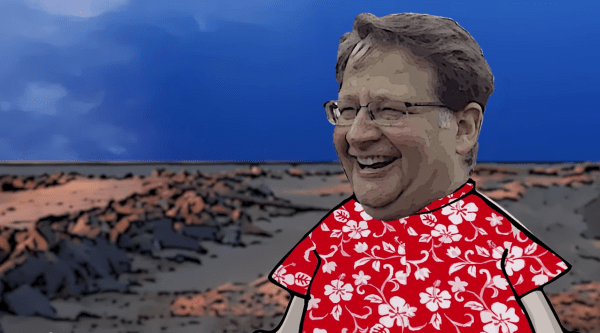 Halloween Scare Tactics: The Most Terrifying Ads of the 2014 Election
Next Up: Editor's Pick