Can Neuroscience Debunk Free Will?

Ideas
By David DiSalvo
David Disalvo is the author of Brain Changer: How Harnessing Your Brain's Power to Adapt Can Change Your Life and the best-selling What Makes Your Brain Happy and Why You Should Do the Opposite, which has been published in 10 languages. His work has appeared in Scientific American Mind, Forbes, Psychology Today, The Wall Street Journal, Slate, Salon, Esquire, Mental Floss and other publications.

For those in the free-will-as-illusion camp, the subjective experience of decision ownership is not unimportant, but it is predicated on neural dynamics that are scientifically knowable, traceable and—in time—predictable. One piece of evidence supporting this position has come from neuroscience research showing that brain activity underlying a given decision occurs before a person consciously apprehends the decision. In other words, thought patterns leading to conscious awareness of what we’re going to do are already in motion before we know we’ll do it. Without conscious knowledge of why we’re choosing as we’re choosing, the argument follows, we cannot claim to be exercising “free” will.

Those supporting a purer view of free will argue that whether or not neuroscience can trace brain activity underlying decisions, making the decision still resides within the domain of an individual’s mind. In this view, parsing unconscious and conscious awareness is less important than the ultimate outcome – a decision, and subsequent action, emerging from a single mind. If free will is drained of its power by scientific determinism, free-will supporters argue, then we’re moving down a dangerous path where people can’t be held accountable for their decisions, since those decisions are triggered by neural activity occurring outside of conscious awareness. Consider how this might play out in a courtroom in which neuroscience evidence is marshalled to defend a murderer on grounds that he couldn’t know why he acted as he did.

Some researchers have decided to approach this debate from a different angle by investigating whether our subjective experience of free will is threatened by the possibility of “neuroprediction” – the idea that tracking brain activity can predict decisions. The answer to this question is not, of course, an answer to the core question about the existence of free will itself. But it addresses something arguably just as important (maybe more so), because ultimately free will has little meaning apart from our belief that it exists.

In a recent study published in Cognition, researchers tested the question with hundreds of undergrads at Georgia State University in Atlanta. The students were first told about a high-tech cap that allows neuroscientists to predict decisions before people make them, based solely on brain activity. The students were then given an article to read about a woman named Jill who tested wearing the cap for a month, during which time neuroscientists were able to predict all of her decisions, including which candidates she’d vote for. The technology and Jill were made up for the study.

The students were asked whether they thought this technology was plausible and whether they felt that it undermines free will. Eighty percent responded that it is plausible, but most did not believe it threatened free will unless the technology went beyond prediction and veered into manipulation of decisions. Only if the neuroscientists had somehow changed Jill’s mind to make decisions she would not have otherwise made did most of the students think her free will was jeopardized.

A follow-up study used the same scenario but added language to the effect of “All human mental activity is just brain activity,” in an attempt to clinically underscore that neuroscientists could interpret and predict Jill’s decisions just by diagraming her brain activity. Again, the majority responded that free will was threatened only if decision prediction turned into decision manipulation.

From the free-will-as-illusion camp, we might expect a skeptical reply to this study along the lines of, “A majority of people thinking Bigfoot exists doesn’t make it so.” That’s an understandable response, but unlike belief in Bigfoot (or insert your favorite myth), the implications for belief in free will are significant. Our subjective understanding about how we process information to arrive at a decision isn’t just a theoretical exercise; what we think about it matters. And it will matter even more as science nears closer to touching uncomfortable possibilities we’ve only been able to imagine.

David Disalvo is the author of Brain Changer: How Harnessing Your Brain’s Power to Adapt Can Change Your Life and the best-selling What Makes Your Brain Happy and Why You Should Do the Opposite, which has been published in 10 languages. His work has appeared in Scientific American Mind, Forbes, Psychology Today, The Wall Street Journal, Slate, Salon, Esquire, Mental Floss and other publications.

Write to David DiSalvo at disalvowrites@gmail.com. 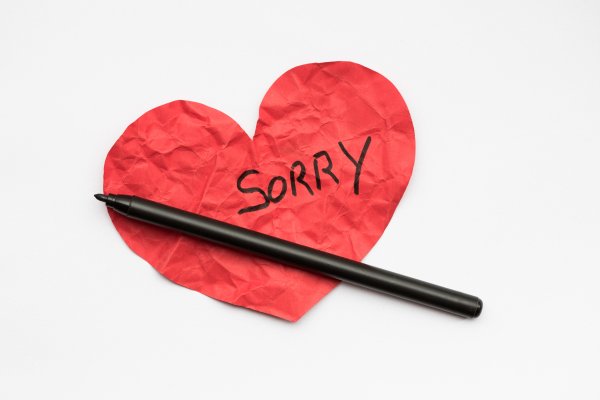 How Japan's Culture of Apologies Is Teaching Me to Stop Saying 'I'm Sorry' All the Time
Next Up: Editor's Pick