Protestors hold signs outside the Metropolitan Opera at Lincoln Center on opening night of the opera, "The Death of Klinghoffer" on October 20, 2014 in New York City. The opera has been accused of anti-Semitism and demonstrators protested its inclusion in this year's schedule at the Metropolitan Opera.
Bryan Thomas—Getty Images
Ideas
By Walter Russell Mead

When they told me last spring that the Met was going to present a controversial, anti-Semitic opera, my first response was to wonder why the Met would be launching a new Ring production so soon after the Giant Popsicle Sticks fiasco of the last one. After all, anti-Semitism is to Wagner, a great composer and deeply flawed human being, what ham is to a ham sandwich. When I found out that the opera in question was John Adam’s “Death of Klinghoffer”, I was a little non-plussed. I’ve listened to Klinghoffer on CD, but had never seen it performed and, politics aside, I thought it was a snoozer. If I’m going to watch evil, Jewish-looking untermenschen scheme against the glory of the gods, at least let me listen to music like the Ride of the Valkyries and Siegfried’s Idyll while the composer inflicts his political idiocy on an unoffending audience.

However, as readers of this site know, I am not of the boycotting persuasion, and when the Monday night opera series I had selected for other reasons included Klinghoffer’s Met premiere, I had no hesitation about going to see for myself. Having seen Merchant of Venice, both Parsifal and the Ring cycle, not to mention having read Mein Kampf, the Protocols of the Elders of Zion, and a tasteful compilation of editorials from Henry Ford’s newspaper, it seemed a little late in the day to start drawing lines in the sand.

Not everybody in New York shared my opinion; protestors blocked the street in front of Lincoln Center and we had to pass through police lines and barricades to get to the show. The lines at the entrance stretched far out into the plaza as the ushers conducted unusually thorough searches of bags at the door. With protestors shouting “Shame! Shame!” and speakers addressing the crowd in heavily miked voices, it was easily the most dramatic moment I’ve ever seen at a New York arts venue.

The excitement continued inside; some of the people opposed to the performance had tickets, and dozens stood to boo or cry out slogans like “Klinghoffer’s murderers will never be forgiven!” at various points during the performance. For history of opera aficionados, it was like a revival of the nineteenth century drama in European opera houses as rival factions of fans cheered or booed politically or musically controversial works.

For those who haven’t followed the latest tempest in the opera world, “The Death of Klinghoffer” is a 1991 opera with music by John Adams and a libretto by Alice Goodman. It is based, loosely, on the 1985 hijacking of the Achille Lauro, a cruise ship, by a group of Palestinian terrorists. During the hijacking the Palestinians murdered Leon Klinghoffer, a wheelchair bound, 69 year old Jewish American passenger on the ship. A number of Jewish groups have voiced strong objections to the opera over the years on the grounds that it misrepresents the events on the ship and offers undue sympathy to the terrorists. Among those objecting to the opera are Leon Klinghoffer’s daughters Lisa and Ilsa; they issued a statement that the Met placed in the program saying, among other things, that the opera “rationalizes, romanticizes and legitimizes the terrorist murder of our father. Our family was not consulted by the composer and librettist and had no role in the development of the opera.”

From my perspective, I am less than fully persuaded by their first charge; the opera may portray the murderers in a more sympathetic light than many might prefer, but is neither an endorsement of nor an apology for the murder. Terrorists, however reprehensible their actions, are human beings, and it is not beyond the province of art to seek to examine and understand, so far as is possible, their motives.

The real problem, and it is a serious one, involves the decision by John Adams and Alice Goodman to use a family’s tragedy for their art without the permission of the family’s members. Leon Klinghoffer was not a public figure; nothing gave Adams and Goodman a moral right to profit from his death or to use it for political or artistic purposes of their own without the permission of his loved ones. The opera not only shows the death of Lisa’s and Ilsa’s father, putting words in his mouth, it presents a fictionalized portrait of their mother’s shock and reaction on hearing the news.

No family not already in public life deserves to have their most intimate and painful moments taken over and made into a public spectacle against their will. You couldn’t take liberties with Mickey and Minnie Mouse without having Disney lawyers come at you with cease and desist orders; Leon Klinghoffer’s family deserves more consideration than a fictional rodent and without in any way seeking to curtail free speech, one can regret the decision of two famous and well established artists to turn someone else’s private grief into a public entertainment.

If I were Peter Gelb, I would have declined to put the opera on, but not on political grounds. I would not have wanted to associate myself with what amounts to psychological rape, and I would not have staged it against the wishes of the murdered man’s family. Dehumanizing Leon Klinghoffer, turning him from a human being into a symbol in their political theater, is what the terrorists did on the Achille Lauro; John Adams and Alice Goodman echo this violation by trampling on the family’s privacy and wishes, stripping the Klinghoffers of their rights and dignity and using them as props. There were other ways to write an opera about the tragic conflict between the Palestinian and Jewish national movements.

The New York Times reviewed the same performance I saw, and the Times critic slid by the ethical vacuum at the heart of the work:

That is a bloodless way to put it and overlooks the reality that Adams and Goodman, by treating the Klinghoffers as public property and disregarding their wishes as so much worthless babbling from untermenschen and little people unworthy of consideration by Serious Artists, have not merely dared; they have transgressed.

As to the musical and dramatic qualities of the work, the verdict is mixed. Whatever his moral blind spots may be, John Adams is one of the most talented American composers of our time, and this opera, while not as musically compelling as “Nixon in China,” contains elements and passages that one cannot but admire. While his minimalist approach to music strikes some as repetitive, Adams’ keen ear for the capabilities of different instruments makes for a rich and varied sound that is capable of great lyrical beauty and dramatic intensity. Adams’ style is a romantic minimalism that builds and swells in glorious profusion and while the opera has its longueurs, at its best the music is powerful and appealing.

Adams’ greatest weakness, and it is a serious one for an opera composer, has to do with his difficulty in writing effective music for singers engaged in ordinary speech. Particularly in the recitatives, and there are a lot of long winded recitatives in this opera, the vocal lines can be much less pleasing and inventive than the orchestral music. Words like boring, cliche and predictable came frequently to mind. The libretto adds to his difficulties; a self conscious and not particularly successful effort to achieve a high poetic tone through allusive language and extended soliloquies often comes across as awkward and long. At its worst, the work features singers interminably droning dull lyrics as the audience waits restlessly for a chorus to break the monotony.

As I struggled to understand why Adams and Goodman chose to steal the Klinghoffers’ story rather than to make up a fictional one, or to find a historical tale that could take on the contemporary issues that engaged them, I found myself thinking of the portrayal of Henry Kissinger in “Nixon in China.” In that opera, also with music by John Adams and a libretto by Alice Goodman, most of the characters are treated with imagination and sympathy—even figures like Richard and Pat Nixon. This helps make that opera one of the most successful contemporary works of art, and adds layers of complexity and depth to the work that, combined with some extraordinary music, might put this opera among the classics.

But when it comes to Kissinger, Adams and Goodman turn him into a clownish villain. In part that may be because they felt that sympathetic portraits of the two Nixons and Henry Kissinger would be too much for a liberal, post-Watergate audience to bear. I’ve always felt that this was an opportunity lost; their criticism of Kissinger would have been more effective and the opera as a whole significantly stronger if they had given him his due. One feels that it was a lack of artistic confidence that led them to take the low road in portraying Dr. K; at some level they didn’t quite believe that the music and libretto could succeed unless they threw in some cheap stunts and tricks.

It’s possible that a similar lack of confidence contributed to the decision to take the low road with the Klinghoffers. It is hard, even for a composer as accomplished and admired as Adams, to get operas into regular production in these times. Opera is expensive, and audiences often fight shy of contemporary works. (At the Met’s Klinghoffer premiere, many patrons didn’t return for the second act; half the seats in the rows immediately in front of me were empty after intermission.) Without the frisson that comes from ‘real’ events and the lure of political controversy, would this opera have had the international success it has enjoyed? Did the composer and librettist feel that they needed to trash the Klinghoffer family’s privacy to get their work the attention they wanted for it—or to make it sharp and powerful in a way that they felt that their imaginations and artistic talents couldn’t achieve without sliming the Klinghoffers?

John Adams is a very good composer. If in the future he places more faith in the power of his art, and rejects unworthy compromises and short cuts, his work would be richer and deeper.

At the end of the Met performance, the boos were silent. Michaela Martens as Marilyn Klinghoffer sang a closing aria that united the audience in admiration of her inspired interpretation of Adams’ haunting music. Those who stayed for the full performance gave her and the cast a standing ovation. I applauded too, and I salute Adams’ talent, but Ilsa and Lisa still didn’t deserve what he did to them—and he didn’t have to do it to create something great. 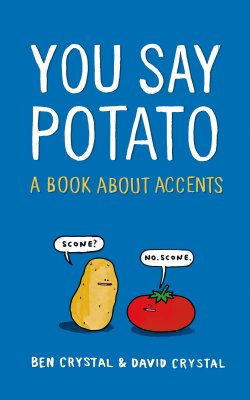 Here's How 600 People Around the World Say the Word 'Potato'
Next Up: Editor's Pick