The society ball at the Plaza Hotel in New York City on Jan. 19, 1970. A woman wears "Oscar's Hairdo."
Ron Frehm—AP
By Lily Rothman

Oscar de la Renta, the acclaimed fashion designer who died Monday at 82, will likely be best remembered for providing dresses for First Ladies and movie stars alike. In the late 1960s, however, he was also famous for something that was a lot less complicated than a couture gown: a messy hairdo.

The style — what might be called a “messy bun” in today’s YouTube hair tutorial lingo — was known in the U.S. as “Oscar’s hairdo” because, in November 1969, he had every model in his spring collection wear the style. The look, which TIME described as “skillfully composed to look as if it had been dragged through a thornbush backward” was alternately known as Belle Époque (because it resembled ‘dos of that era), the Onion (for British fashionistas), the Char (because it made you look like a charwoman, or cleaning lady), Concierge (in France) or Goulue (after the can-can dancer). LIFE Magazine even added it could be called “The Washerwoman.” It was originally conceived by Paris coiffeur Christophe Carita in 1968, perhaps inspired by Brigitte Bardot, and New York hairdresser Kenneth told TIME that its sex appeal may have come from the idea that if you could find the hairpin that’s holding it up “in a matter of seconds it will all be out on the pillow.”

Here’s how you create the look, as per TIME:

Despite the many ironic names for the style, and this magazine’s implication that it was a ridiculous idea to pay to end up with messy hair — $17.50 at a Manhattan salon, a price that might cause today’s New Yorkers to faint in gratitude — Oscar’s Hairdo has proved to have staying power: Glamour has declared that the “coming-undone style” will be one of next spring’s hottest looks. 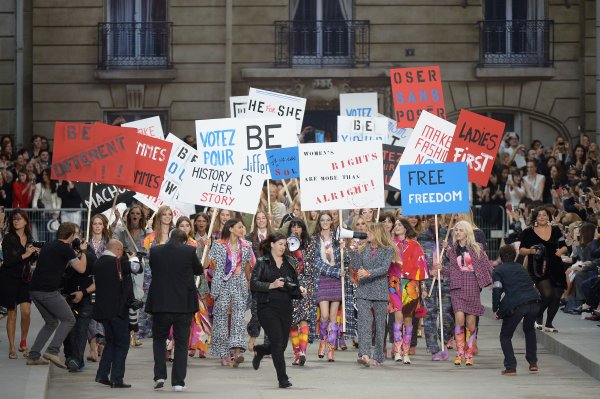