Question: I need a new iPad, but I’m not sure which one I should get. Is the iPad Air 2 worth it or is one of the other models a better deal? I don’t really care if it’s a full-size iPad or one of the smaller ones. And I’m okay with spending $500, but if I don’t have to, obviously I would like to save some money. What are the main differences between all of them?

Long Answer: Someone who says “I need a new iPad” is apparently a rarity nowadays, with Apple having trouble convincing people to upgrade their tablets regularly. I’m part of the problem: I’ve been using an iPad 3 for the past million years and it still suits me fine.

Here’s a video comparison of all the currently-available iPads, which contains much of the advice you’ll otherwise read below:

Don’t get too distracted by the iPad Air 2’s other specs, though. It’s thinner than the first iPad Air, yes, but we’re talking half of a tenth of an inch. It’s lighter, sure, but we’re talking 0.04 pounds for the Wi-Fi model. The big news here is the processor. The iPad Air 2 is also rumored to sport two gigabytes of RAM versus one gigabyte for all the other models, which should increase performance.

The iPad Air 2 has the fingerprint sensor that debuted with the iPhone 5S, which makes unlocking your iPad quick (assuming you lock it with a passcode) and lets you buy stuff from iTunes without typing in your password. You’ll also be able to log into certain third-party apps with your fingerprint as well.

Finally, the iPad Air 2 uses newer, thinner screen technology that makes colors pop a bit more. Apple added an anti-reflective coating as well. The front-facing camera is a little better than the previous model’s, and the Wi-Fi chip uses newer technology that allows it to connect to certain networks faster. Oh, and you can get it in gold (gold is best) and in a 128-gigabyte storage configuration.

Step “down” to last year’s iPad Air, and you lose the gold option. You get a less efficient processor. The screen is still the same resolution, but there’s no antireflective coating. It’s marginally, marginally, marginally less thin and light. The front-facing camera is five megapixels instead of eight. There’s no fingerprint sensor. It doesn’t connect to certain superfast Wi-Fi networks as fast as the iPad Air 2 does. It might not have as much RAM.

On paper, Apple makes a somewhat convincing case for going with the iPad Air 2 over the iPad Air. In reality, what you’re giving up in order to save $100 might not be all that important. The iPad Air is still plenty fast, plenty thin and plenty light.

Now we’re going to basically step laterally to the iPad Mini 3, Apple’s newest iPad Mini model. Aside from it being smaller than the iPad Air models, under the hood, the iPad Mini 3 is almost identical to the iPad Air — all the way down to the $399 starting price. You do get the fingerprint sensor with the iPad Mini 3, the gold color option and the 128-gigabyte storage option. The processor, cameras, connections and just about everything else are the same.

Don’t fall for this one. You might save $50 by going with the original iPad Mini, but it’s got a much slower processor than all the other iPads and its screen is much lower-resolution. If ever you had a reason to cough up an extra $50, this is it. The iPad Mini at $250 allows Apple to offer an iPad that can kinda-sorta compete with low-cost Android tablets, except that any $250 Android tablet would almost certainly feature much more potent specs. This is half a marketing play by Apple (“iPad starts at $250!”) and half a chance to clear out leftover inventory of a two-year-old tablet.

If you’re looking for even more info, Apple has a handy iPad comparison page for your perusal. 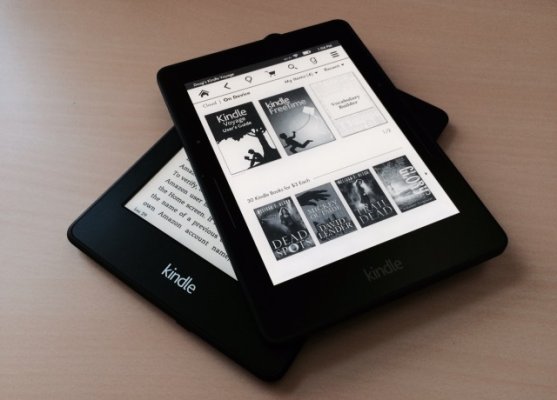 Amazon's Kindles Compared: Voyage vs Paperwhite vs Standard
Next Up: Editor's Pick