Over the past several days, New Hampshire Republican Senate candidate Scott Brown has not let up hammering his Democratic opponent about Ebola.

On Thursday, he called on President Barack Obama to institute a travel ban from West Africa. On Friday, he said Democratic Sen. Jeanne Shaheen, is “rubber-stamping the President’s policy,” by opposing his position. He also told Fox News’ Brian Kilmeade that if 2012 Republican presidential candidate Mitt Romney had won, Ebola wouldn’t be a problem. The next day he wrote a letter urging Shaheen to accept a travel ban, saying that the position goes “beyond partisan politics.”

By Monday, Shaheen could take no more. “Senator Shaheen has contacted New Hampshire officials about local preparedness,” her spokesman Harrell Kirstein said Monday afternoon, just days after Shaheen said a travel ban did not make sense. “She strongly supports any and all effective measures to keep Americans safe including travel bans if they would work.”

Brown and other Republicans in tightly contested Senate races have put Democrats on their heels by following public polls that show a majority of the country wants to combat Ebola with a travel ban, even though health experts warn that such a move would make the crises in West Africa worse and ultimately increase the likelihood that the virus travels again to the United States.

Shaheen joins an ever-growing cohort of vulnerable Democrats running for Senate that have moved on the issue. Over the past week, Colorado Sen. Mark Udall, Arkansas Sen. Mark Pryor, and Georgia candidate Michelle Nunn, have announced they are in favor of some type of travel ban. On Friday, North Carolina Sen. Kay Hagan even flip-flopped in favor of a ban, saying she supported it just days after saying it would not help.

Other Senate Democratic candidates may still shift under Republican and public pressure. On Tuesday, a Washington Post-ABC poll found that two-thirds of respondents support restricting entry to the United States for people who’ve been in the West African affected countries. The next Senate Democratic candidate to support a travel ban could very well be Louisiana Sen. Mary Landrieu, who has advocated to expand airport screenings, but has faced pressure to commit to a ban from her opponent, Rep. Bill Cassidy (R-La.).

Dr. Pearson Cross, an associate political science professor at the University of Louisiana at Lafayette, says that Landrieu could face a “high,” short-term political cost otherwise. “If Landrieu doesn’t support a travel ban it may be spun that she is insufficiently concerned with protecting America and Louisiana’s health and interests in the name of political correctness,” says Cross. “That could be used in a campaign ad and on the trail where people are quite concerned about this fast-moving and often misunderstood issue.”

On Friday, Cook Political Report, the nonpartisan election handicapper, threw the race from leaning Shaheen to a “toss-up,” citing the unfavorable Democratic environment, voters finally tuning in with two weeks left in the race and Brown’s campaign abilities. “There’s been a lot of public attention to the threat of Ebola, so it’s definitely playing here,” says Dr. Dante Scala, an associate political science professor at the University of New Hampshire. “I’m sure there’s a lot more concern about that among voters than there is about the Senate race itself. I think it transcends politics in that way.”

With the political winds growing so strongly, even the White House has, at times, encouraged Democratic candidates to criticize the administration over Ebola. Last week, Iowa Democratic Rep. Bruce Braley, who is running for Senate against Republican state Sen. Joni Ernst and said he would consider the travel ban, admonished the Administration for not acting fast enough. Asked about the comments, White House Press Secretary Josh Earnest said that Braley was “somebody that has a reputation for being willing to speak truth to power, whether they’re in the same party as him or not.”

“I think this is another indication that he’s willing to do that,” Earnest added. 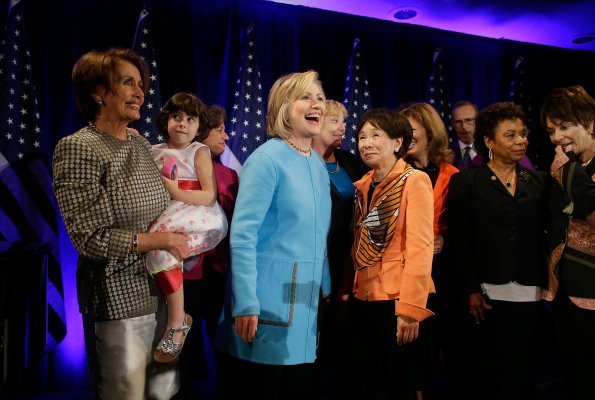 Pelosi and Hillary Join Forces to Rally Democratic Women
Next Up: Editor's Pick