Slava Voynov of the Los Angeles Kings celebrates with the Stanley Cup after the Kings 3-2 double overtime victory against the New York Rangers in Game Five of the 2014 Stanley Cup Final at Staples Center on June 13, 2014 in Los Angeles.
Bruce Bennett&mdash;Getty Images
By Sports Illustrated / Ben Estes

The NHL has suspended defenseman Slava Voynov indefinitely after he was arrested on domestic violence charges Monday morning, the league announced Monday.

There are currently no details on the exact nature of Voynov’s arrest other than that he violated California Penal Code section 273.5, Domestic Violence. He will continue to be paid while suspended.

From the NHL’s release:

Voynov, 24, has been with the Kings since 2011-12 and played in all 82 games for the team last season while helping it win the Stanley Cup. He’s played in all of the Kings’ six games this season, recording two assists and averaging 23:11 of ice time per game.

The NHL dealt with a similar incident last year when Colorado Avalanche goalie Semyon Varlamov was arrested on domestic violence charges in an incident involving his girlfriend. The charges were later dropped.

The news of Voynov’s arrest comes amidst significant controversy around the issue of domestic violence in the NFL stemming from the arrest of former Baltimore Ravens running back Ray Rice.

The release of video showing Rice striking his then-fiancée in an Atlantic City casino elevator led to Rice’s release from Ravens and an indefinite suspension from the NFL, with criticism levied at the latter for initially suspending Rice for just two games.

The NFL has said it is working on developing a new domestic violence policy and the handling of the Rice case by NFL commissioner Roger Goodell is the subject of an investigation led by former FBI director Robert Mueller III.

The issue of domestic violence has emerged in other sports as well, including the arrests of U.S. national team goalie Hope Solo and Charlotte Hornets forward Jeffery Taylor. 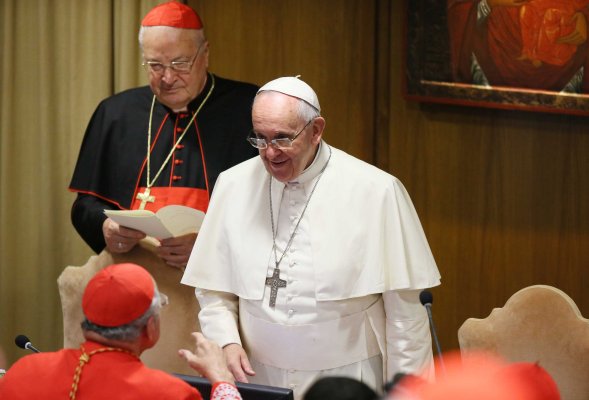 What the Synod Says About Pope Francis
Next Up: Editor's Pick