Nahla, Gabriel Aubry and Halle Berry at the Topanga Canyon Festival on May 24, 2009 in Topanga Canyon, California.
David Aguilera—FilmMagic
Ideas
By Cathy Young
Cathy Young is a contributing editor at Reason magazine.

The latest celebrity tussle over child support has an unusual twist. The parent seeking a reduction in child-support payments is the mother, Oscar-winning actress Halle Berry. The parent collecting the checks is her ex-boyfriend, French-Canadian fashion model Gabriel Aubry, who shares custody of their 6-year-old daughter Nahla. The gossip website TMZ reports that Berry has petitioned the judge overseeing the couple’s custody arrangement to reduce the monthly child-support payment of $16,000 to just $3,000, alleging that Aubry is refusing to get a job. Is this what equality looks like? Sometimes, it is—though the reactions to this skirmish show that a double standard definitely persists when it comes to men “living off” women.

TMZ ran the story under the headline, “Halle Berry: GABRIEL AUBRY IS A BUM; I Want Child Support Slashed.” A piece on Gawker’s Defamer blog sarcastically complimented Aubry on finding a great gravy train and suggested that Berry could not be blamed for wanting to put a stop to it. When a Gawker commenter posted a crude remark questioning Aubry’s manhood and joking about “medical bills to reattach his penis,” blogger Jordan Sargent’s only response was, “Strong comment.”

Would a woman collecting a lot of child support from her wealthy ex be derided as a lazy bum? Certainly not. (She might be attacked as a greedy vixen, but such attacks would likely be seen as misogynist.) For all the feminism-inspired changes in cultural beliefs about what it means to be a woman or a man, the idea that providing for one’s family is an essential part of masculinity has endured. While 40% of mothers in the U.S. are now their family’s primary breadwinner—including nearly a quarter of married moms—nearly a third of Americans still agree it’s best for everyone when the man provides for his family. One person’s Mr. Mom is another’s Mr. Bum.

While men are somewhat more likely than women to hold traditional views on gender issues, there is evidence that in their personal preferences, women may actually be more wedded—as it were—to the male-breadwinner ideal. In a 1994 study based on U.S. survey data of single adults, men were almost as willing to marry “someone who earns much more” than them as “someone who earns much less.” For women, a higher-earning partner rated 6 points out of a maximum of 7, compared with 3.5 for a lower-earning one. Women were also much less willing than men to marry someone who did not have a steady job.

Have things changed in 20 years? Perhaps not, in this regard. In the latest Pew Research Center poll on marriage, one of the biggest gender gaps for singles is in how important people consider employment for a spouse or long-term partner: 78% of women regard having “a steady job” as “very important” in choosing a mate, while only 46% of men do. Sorry, Gabriel Aubry.

These preferences are largely related to family roles. It’s not that women are materialistic gold diggers; rather, most want the option to curtail or interrupt paid work for motherhood. But prejudice against men who aren’t good providers may paradoxically clash with ambitious women’s life plans.

Take one of the women interviewed for feminist journalist Peggy Orenstein’s 2000 book, Flux: Women on Sex, Work, Love, Kids and Life in a Half-Changed World. “Abbey,” a 26-year-old artist and comic-book sales rep planning a career in the industry, admitted to growing ambivalence about her art-director boyfriend Jeremy. While Jeremy was devoted, supportive of Abbey’s goals and willing to follow her when she had to move, she was put off by his lack of ambition and limited earning potential. Ultimately, Abbey confessed that she’d rather have the choice to stay home after having children—despite being virtually certain that she wouldn’t exercise that choice and being strongly attached to her identity as a professional woman. Yet marriage to a Jeremy may be the best choice for a woman who wants to balance career and family.

Generally, it’s conservatives like RedState.org blogger Erik Erikson who defend the male-breadwinner role as biological (not quite the case if you look at the animal kingdom). Yet when a man and woman are in financial conflict, many feminists will line up in apparent solidarity behind a woman who upholds the most stereotypical of attitudes about gender and providing.

During the O.J. Simpson trial in 1995, prosecutor Marcia Clark sought more child support from her estranged husband—who earned half her salary—because of trial-related child-care expenses. (Imagine the derision if a male attorney had done the same.) When Gordon Clark asked for temporary custody, a chorus of feminist voices rose to defend Clark as a strong woman under attack. Today feminist websites like Jezebel mock affluent men who want to pay less child support as cheap crybabies—but offer no comment on Halle Berry’s bid for child-support reduction.

To be sure, $16,000 a month for a 6-year-old who spends half her time with her dad may raise questions about appropriate levels of child support in cases involving wealthy parents—and about when child support becomes a subsidy for a parent who should be pulling his, or her, weight. But such questions should be raised across the board, without double standards. In his own accidental way, Aubry is a pioneer for gender equality.

Young is a contributing editor at Reason magazine. 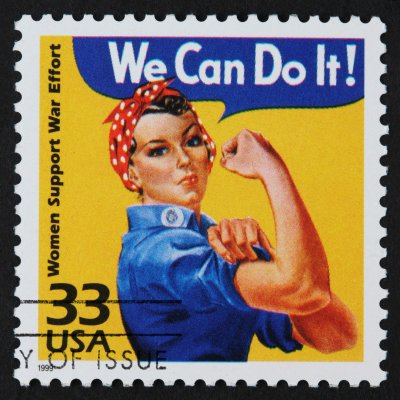 It’s Not Just You. Feminism Does Seem To Be Getting Weirder.
Next Up: Editor's Pick