Woman Gets Trapped in Chimney Allegedly Stalking Her Online Date

A woman rescued from a chimney was arrested and charged with allegedly using the chimney to try and break into the home of a man she had met online.

The Ventura County Fire Department was called to a Thousand Oaks, California, home early Sunday morning, when it was reported that a woman was stuck in a chimney.

Firefighters used a jackhammer to break apart the chimney and lubricated the flue with dish soap in order to lift the woman out of the chimney. She was then placed in a basket and lifted off the roof by a ladder truck, according to Ventura County Fire Department Capt. Mike Lindbery’s tweets regarding the incident.

The woman, who remained conscious during the misadventure, was taken to the hospital for examination. Her condition was not immediately known, according to KTLA.

The so-called “entrapment patient” was later identified as Genoveva Nunez-Figueroa, 30, and the home’s resident, who did not wish to be identified, said he met Nunez-Figueroa online and had gone on several dates with her, but had recently ended the relationship, according to the local ABC news affiliate.

The woman’s “intent was unclear,” according to police, but as Christmas is still months away, she was probably not playing Santa Claus or chimney sweep, as this is the second time Nunez-Figueroa was found on the man’s roof. Two weeks ago, she was spotted, but disappeared when police were called.

Nunez-Figueroa was arrested for allegedly illegally entering a residence and providing false information to a peace officer, the Ventura County Sheriff’s Department stated in a news release.

The home’s resident wanted other online daters to learn from his cautionary tale. “Before you have somebody come in your house really check them out … really give it some time before you let somebody in, because they might want to stay,” he told KTLA. 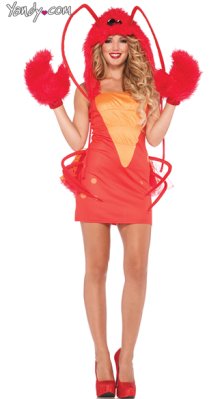 2014 Could Be the Year of the 'Sexy Lobster' Halloween Costume
Next Up: Editor's Pick